Whew! What a week it's been already. I missed Monday & Tuesday of work, due to the wonderfulness of The Sinus Infection. Ugh. It was gross. And painful. And not fun. Thankfully, the doctor gave me a good ol' shot & z-pack & I am feeling about 90% better! Just a tad bit of congestion still going on, but at least that sinus headache & inability to breathe - those things are no more. :)

So...on to some thoughts for you!

{one} My blog-friend Tricia Nae finished up my blog design this week & I love it! If you're reading from your reader, you should pop on over here & check it out! I love it, I love it, I love it! Oooh, & scroll to the bottom, too! There's a footer! And i got social networking buttons - something I could never figure out on my own. Yay! Thanks again, Tricia!

{two} While out sick, I discovered Undercover Boss: Canada on my Netflix Streaming. Y'all. So GOOD! Really. It actually inspired me to give it my ALL at work at all times, even those stressful, annoying, I'm-going-to-punch-someone-in-the-face-right-now times! And it made me emotional when the undercover bosses rewarded their bottom-of-the-totem-pole workers with things like $5000 to one chic's daughter's school (her daughter is blind), a trip for two to paris (somewhere the recipient had always wanted to go), etc. One girl even mentioned to her undercover boss that she had always wanted to work for the home office, and put her education in business to good use - he offered her a job, of course. It was SO sweet & made me cry! I'm a sucker, I know. :)

{three} I'm kind of so sick of facebook, I don't know what to do. If all of the people i really want to keep up with would either switch to twitter (which I am actually still trying to get into...) or Instagram or blogging, I would totally quit. Maybe I should just take a leave of absence. I don't know. But i am SO SICK TO DEATH of seeing political stuff in my news feed. I just ... I hate to say i don't CARE, because I DO, but i just don't want to talk about it. Or read about it. Ever. And you can only hit the hide button so many times....arghh...

{six} We have some new friends named Billy & Mandy... Brad has actually know them both for many years (but not since they've been married & they've been married almost a decade...so it's been awhile). It's actually my worship pastor & his wife. Anyway. I have withdrawals from them. Every week. I like them that much. It's kind of maybe creepy! 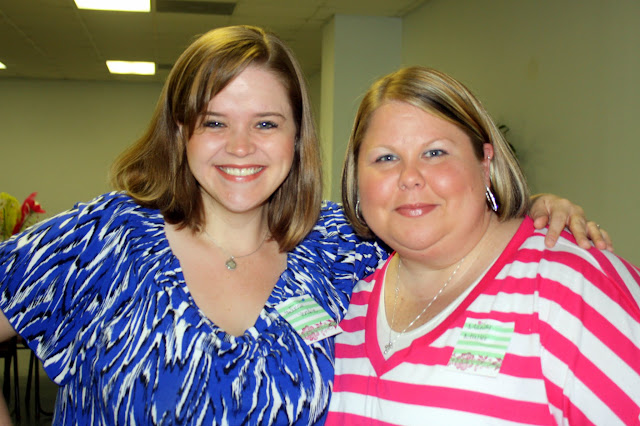 Me & Mandy at the tea last Saturday. Love her!

{seven} I made an appointment at work for a haircut on Monday. When it gets past my shoulders i want it OFF. It is just too heavy & too hot/humid outside. I'm over it.

{eight} I had dinner last night with two long-time besties, Sarah & Shana. I have been besties with Sarah since 5th grade & with Shana since... maybe 12th grade (which, let's face it, has been more than 15 years ago! Gah!). Unfortunately i NEVER seem to get a pic when I'm with them...there is just WAY too much chit chat going on! But we went to Lagniappe, which was oh-so-good & we talked for ever. Much needed. I love them. :) Here is a pic from my wedding...i don't have a pic of the three of us together after this. Wow, that is just...SAD. 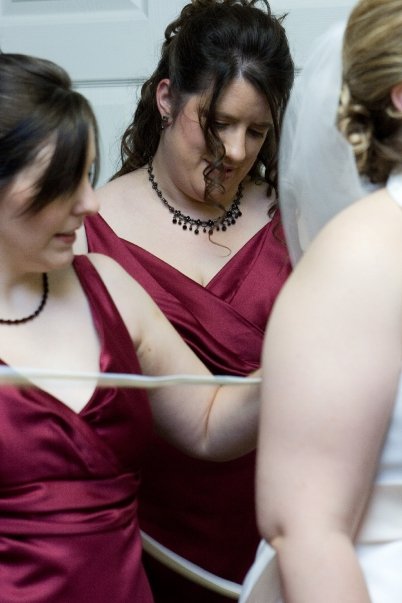 They were lacing me up! Ha!

{nine} Um... they keep opening businesses around my workplace that i object to. I mean, they are currently building a Dunkin Donuts two doors down to the left & a Dairy Queen a few doors down to the right. I mean, y'all. Seriously? Obviously, i know these business owners just know they'll get good businesses here (read: MONEY), but isn't there a single HEALTHY place that knows Louisiana is like the capital of obesity rates & seriously needs some better food choices? I probably will never set foot in either of these places (really. we have a baskin robbins on campus that i only went to once - to pick up Brad's favorite ice cream on his bday), but if someone brings donuts to work - oh, heaven, HELP ME! That's all i can say!

It's like when they started building something new right by our house & me and hubby got all excited, wondering & wondering what it would be - a new bookstore? a little cafe? what could it be? And then one day we saw the golden arches. And we were like "REALLY? ANOTHER McDonalds?!?!"

{eleven} I have a little giveaway for a great book going on here, if you would like to enter! :)

Posted by Melissa at 11:46 AM
Email ThisBlogThis!Share to TwitterShare to FacebookShare to Pinterest
Labels: Friends, TV