Well, I was right. That last post was my last update for awhile! We lost electricity around 1:15 pm on Wednesday & it just came back on last night! Ahhh.

No electricity really wasn't so bad. It wasn't as hot as i thought it would be, I guess because the storm brought in some cooler temps for awhile there (unfortunately, it took the cooler temps with it when it left, too, as it's back to H-O-T here in Baton Rouge!).  That first day without electricity i just sat by the window & read until it got too dark to read! Then we played Phase 10 by candlelight, and i beat brad! Ha! 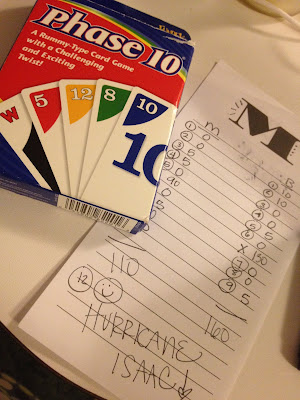 Of course, before the reading, napping & game-playing, i had to do one more vlog. I know...shocker! I resisted the urge to grab an umbrella & have Brad film me in the middle of it! Like a real weather reporter! HA! (If you missed the previous vlogs, you can check them out here & here!)

Disclaimers: Um, i realized just now that everyone is probably wondering why i show you the door at first?! HAHA! It's because i started off video'ing this one from INSIDE... but that one didn't turn out good so i started over OUTSIDE... & i guess felt like i was supposed to start as if it was coming from inside?!?!? Does that make sense? WEIRD.

ALSO...some sound quality is messed up in the middle... it's plaquemines parish you should pray for... it sounds more like "please pray for the people of chsdodoskdlssl parish" - Don't know what happened there!

This one just isn't as good as that first one. But oh-well. You get the idea!

So, that's my last video! My iPhone died after that!

I did sneak a few shots, though! It is POURING in all of these pics! Rain just doesn't show up in my pictures! Oh-well. 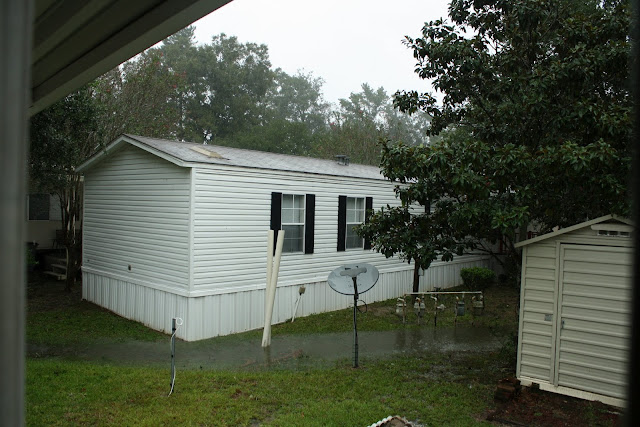 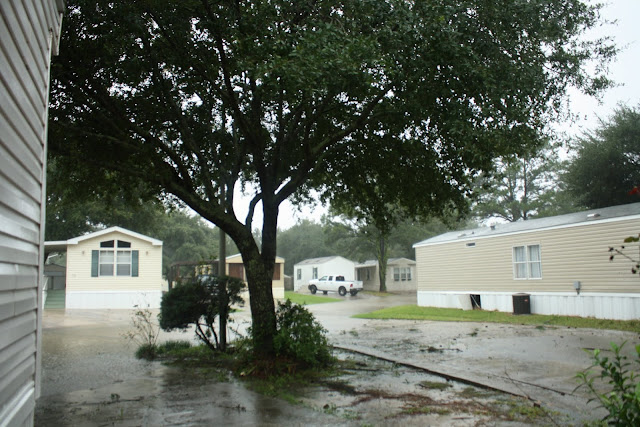 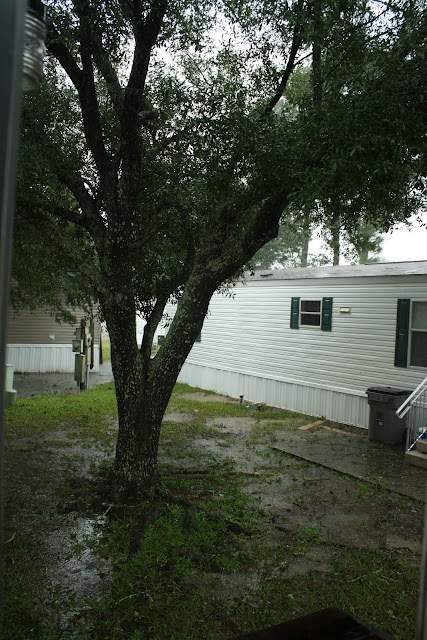 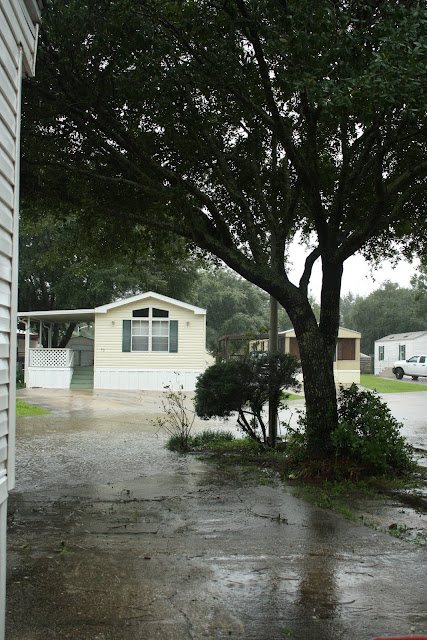 Woke up Thursday after a decent night of sleep (considering no a/c or fan on!). We found out soon that Brad's parents had electricity, so we headed over there to visit for awhile! :) (It was safe to drive at this point.)

Here are pics of Thursday morning, the day after the storm. 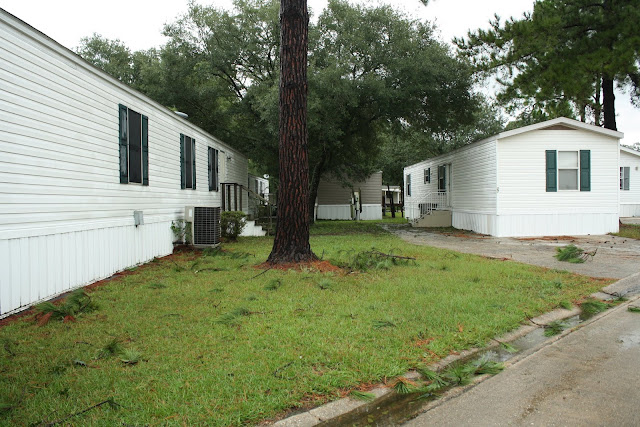 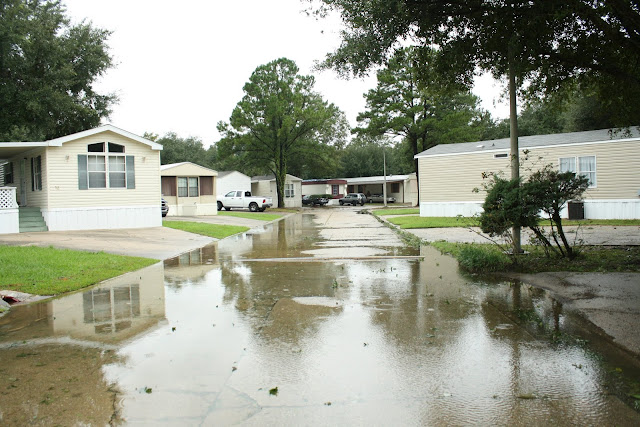 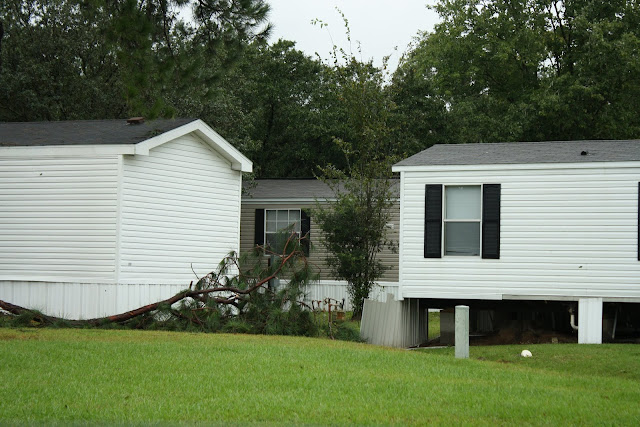 We saw this as we were leaving for Brad's parent's house. That branch is HUGE! Glad it didn't hit the roof! I think it may be what knocked off the skirting, but that should be an easy fix!

On our way to the in-laws, we saw lots of power lines down, some trees down, and other debris everywhere. Lots of lights out. But some places back open for business! Crazy!

We visited until evening, and then i found out work would re-open on Friday. I decided to pack a bag & take the dog to my parent's house (they never lost electricity). It was a lot hotter in our trailer by then, and besides, i needed to be able to dry my hair before work the next day! Haha.

I did NOT sleep well Thursday night. SO GLAD I got permission to go in late to work Friday, or i don't know if i would have made it! It started storming again & Fievel was UPSET, which kept me awake. I was in & out of sleep all night, so by the time morning came, i felt like i hadn't slept much at all! :( I also woke up with SEVERE sinus issues! After a bath & some coffee, i felt MUCH BETTER, though. And mom made me a delicious breakfast, too! (Thanks, mom!)

Work wasn't bad at all. Traffic was HORRIBLE because of lights being out & people not knowing how to treat it as a 4-way stop. :) But it wasn't bad. I went straight to the theater after the show, and we were planning on staying another night at my parents... until i got a text from Brad just after 6pm saying, "We have power!!!" YEAH!

SO today we are RELAXING & also doing some cleaning... had to throw all the contents of our fridge out and will also clean this house thoroughly! But so glad to be home with everything back to normal.

Please pray for those affected by this storm that were not as fortunate as we were. There are many dealing with severe flooding as we speak. Even though the hurricane is gone, waters are rising & people are losing everything they have. :(

Thanks again for praying for us!