FINALLY! I've really been wanting to participate in Amy's Frankly Fridays, but it seems like EVERY Friday I never get a chance to do it! Today I am working till 8, which means i don't have to go in until 11. So...looks like I may actually get to write a Frankly Friday post. I'm glad... I have something on my heart to share with you!

First, though, I want to tell you what Frankly Friday is all about since it's my first time participating here. In Amy's words:

What is Frankly Friday? Let's define Frankly, shall we... "In an open, honest & direct manner". I want this to be a way for all of us to be open, raw and transparent with not only each other... but with ourselves. ...whether it's about a situation  your struggling through, a victory you've made, a memory that you can't let go of...anything as long as it's honest." 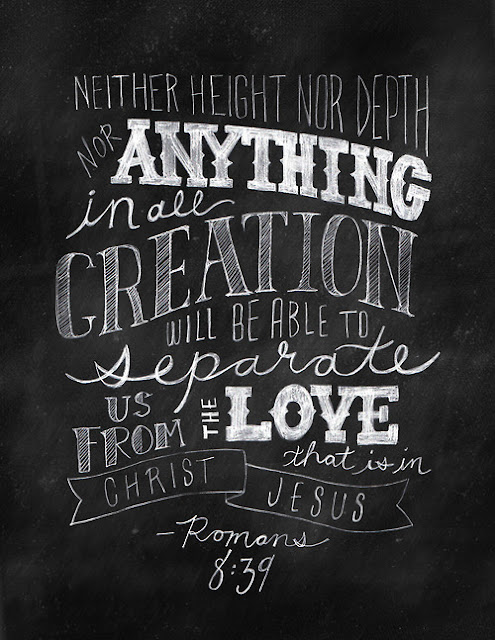 source
Read that. Let it sink in.

NOTHING can separate you from His love. He loves you SO MUCH. There is nothing you can do or say that will make him love you more.

The reason I am bringing this up, is because there is something I hear fairly often that...while maybe said sometimes as a joke...isn't true at all about the character of God. I hear this among Christians and non-Christians, the deeply religious and the not-so-much. But one thing they all have in common: They do not have an understanding of just how deeply their Father loves them.

Honestly? NONE OF US DO. It's something we can't even comprehend fully. BUT some of us have had a revelation of God's love. Just a small picture of it. Just an inkling. Or we have walked with Him long enough now to know that he loves us, no matter what.

But others have no clue. And let me tell you - there is FREEDOM in knowing the depth of His love for you- even if it's just a small revelation of it.

Back to what I was saying -
I'm talking about when, after maybe saying something they shouldn't have said, a person follows it up with: "I'm totally going to hell now."

Or when, after 5 or 10 things just went wrong, they'll say, "God must totally hate me."

Or (and I'm guilty of this one - although I believe God is freeing me from it), how after they do something they KNOW they shouldn't have done...they'll think GOD IS MAD AT THEM or that God doesn't love them any more...and that guilty feeling doesn't go away until they fix what they did..or do something else RIGHT.

But I have news. God isn't the Karma God. He doesn't come chasing you with a big stick when you mess up. He is a God FULL of mercy & grace & love & second chances. His mercy never ends. His love never runs out. NOTHING YOU CAN DO will EVER change that. He loves you more than anyone has ever loved you before. Or will ever love you in the future. He loves you more than YOU have ever loved anyone else. Even your husband. Even your children. He KNOWS love. And he knows you. And he LOVES YOU.

Please don't misunderstand. I'm not saying - GO ON DOING STUPID THINGS! I'm not saying, "Continue to sin - Jesus loves you anyway!" Paul said the same thing: "What shall we say then? Shall we go on sinning, so that grace may increase? By no means! We are those who have died to sin, how can we live in it any longer? ...For sin shall no longer be your master, because you are no longer under the law, but under grace." Romans 6:1 & 14


If this post is speaking to you in any way, do something for me: Ask God to give you a revelation of His love. Just a glimpse. He will show you that He loves you. And it will take your breath away. It will FREE you...not to do more things wrong... but it will free you from thinking what the enemy wants you think - that you must EARN God's love. That's not the way He works, y'all. That's not even in His character. Even if your mom or dad was like that, God isn't. He already loves you, just as you are.

Posted by Melissa at 10:29 AM
Email ThisBlogThis!Share to TwitterShare to FacebookShare to Pinterest
Labels: bible, faith, God, love