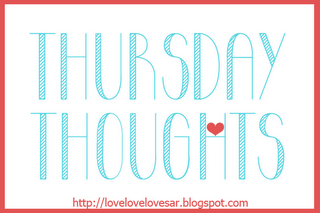 Today, my thoughts are ALL about work (with a few non-work things added in). I'm sorry. I hope it doesn't bore you. Although maybe you'll find the behind-the-scenes of a cosmetology school interesting? Honestly, sometimes we joke that it could be a reality show.... we joke because it's true. Haha. I mean, really. Lots of D-R-A-M-A here.
...ANYWAY!

{1}
It's orientation week at work.  We have two schedules: Mon/Tues/Wed students & Thurs/Fri/Sat students. We used to have orientation for two days a week before the students actually started school. Back then, we did ALL the students at once (both schedules). But now their orientation IS their first days of school. Which means we do orientation once - and then we get to do it all over again! Aaahh!

{2}
It's not a TERRIBLE thing because I'd rather do orientation with 20-something students than with 40-something, but still. It's just a LOT of work getting it all together... A LOT.  So, it's crazy to think - "WHEW! We did it!" - Oh, wait. We gotta do this AGAIN!

{3}
Orientation is their entire first week. Just different things on the agenda all day long for all three days. I have the students twice.  On their first day of orientation (Monday & today), I have a 45 minute talk with them about things like attendance, the tardy policy, academics, report cards, probation, leave of absences, etc etc etc. All that fun stuff!

{4}
On their second day, I have them at the end of the day for three things: badge pictures, paperwork & KIT DISBURSEMENT! The entire thing I must do in a VERY organized way... otherwise, i will just curl up in a ball and cry. First i take their pics for their ID badge. Then I go through about 10 papers they each have to sign.  THEN - their most anticipated part of all of orientation - I do kit disbursement...which is basically when we give them ALL of the tools they'll be using for their year of school. Someone ALWAYS exclaims, "It's like CHRISTMAS!" That was Tuesday & it will be tomorrow. And it's the very end of the day, so I work until 8 instead of my usual 5. Blerg. (But i go in at 11.)

And just in case i ever say the words "Kit Disbursement" again... this is what it looks like. Before they get there, I mean... 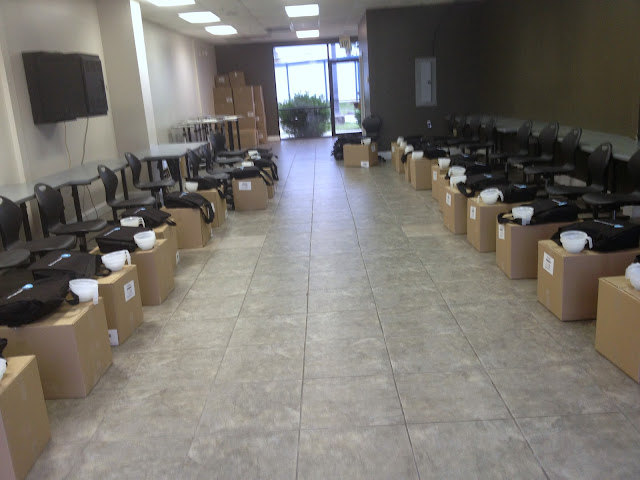 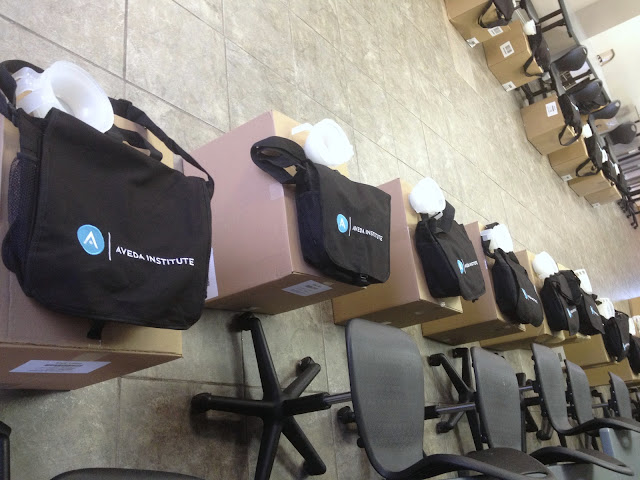 And this is the face...preparing for the craziness that is about to take place...and praying it all goes smoothly... :) 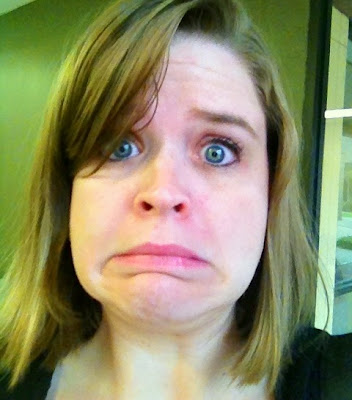 Now...I'm done with all but tomorrow's kit disbursement. It's from 6-8pm. Say a prayer?! (It really will be fine. I'm just being dramatic. But you can still say a prayer! Geez.)

{5}
And on to non-work related things! (You're welcome.) Fievel had a vet appointment yesterday. The groomer said it looks like he has an eye infection, and he was due for his shots anyway, so off we went. Poor Feef gets SO nervous when we go to the vet. He asks me to hold him & i sit him in my lap while we wait & he just sits & stares at everything intently, ears perked for any sound. The vet and her techs LOVE him, because he is SOOO good and SOOO cute while he's there. He's pretty good most of the time at home...and he's always cute! But his behavior at the vets is UNREAL! And adorable. He sits so still and doesn't squirm at all for his shots or her checking in his eyes or ears or anything! And he doesn't have an eye infection. Yay. ;)

She did give him some eye salve stuff, though, because they're SO red. She said it's probably allergies. Ha! Takes after his mom & dad! ;) 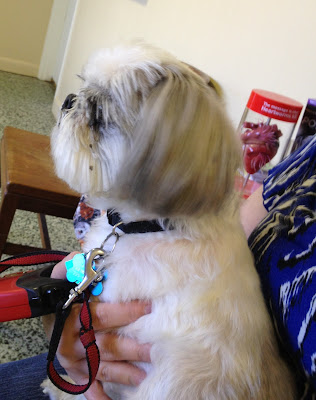 In the waiting room.

{6}
Tomorrow? Friday! WEEKEND! Hurray! Not doing much on Saturday, except making an appetizer & helping to host my mother-in-law's retirement party! :) Sunday is church... and then it's back to work again! Arghhhh.

Posted by Melissa at 10:36 PM
Email ThisBlogThis!Share to TwitterShare to FacebookShare to Pinterest
Labels: Fievel the Dog, work