I talked about my first photography class here, and i kind of got into what we learned in our second class there, too. This one is about our class this past Thursday.

We spent a lot of time going over homework from the week before. I am kind of embarrassed to show you these... i felt like 2 of them were really bad. Haha! Oh-well.

Oh, man. Oh, man oh man. Let's start with the two that were embarrassing, shall we?! 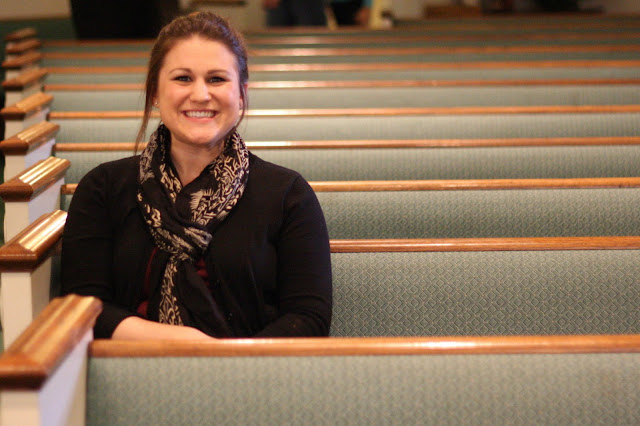 HAHAHAHA! I laugh every time i look at this one! I'm not laughing at my beautiful model, Ashley, although her big grin does make me happy. :) I love her! But i laugh because this is SO NOT what i needed to do for my repitition photo! Big fat FAIL! LOL! He did say some good things about my settings being exactly what he would have used. I am sure he was scrounging up for some sort of compliment. ;) 1/40, f/1.8, ISO: 1600 (dim church lighting... i had to).

So here's how this went down. Repetition. I was under the impression that he wanted a model with our repetition photo. The examples he showed us had a bride walking among some tall columns, and another example showed a guy sitting at the bottom of some steps. I kept racking my brain for what to use for my photo. I mean... i see repetitious things all the time, but while i'm driving down the interstate. Not like i can pull over & take a photo! Plus i don't normally have my camera & a model with me on my way home from work. ;) As i was putting my stuff in the car for church Sunday morning, i thought - "THE PEWS!!" and ran inside for my camera. Decided to put Ashley in them. But - it's more like - why is there a girl in a pew? When she could be looking down or she could be on the back row, looking to the side, or even just with a more serious look, not grinning. I decided to just turn it in anyway, i mean - it's all i had!

NOBODY ELSE had a model in their repetition photo! Haha. Yeah. At least everyone is cool in that class! I would have been mortified if this were high school. ;) 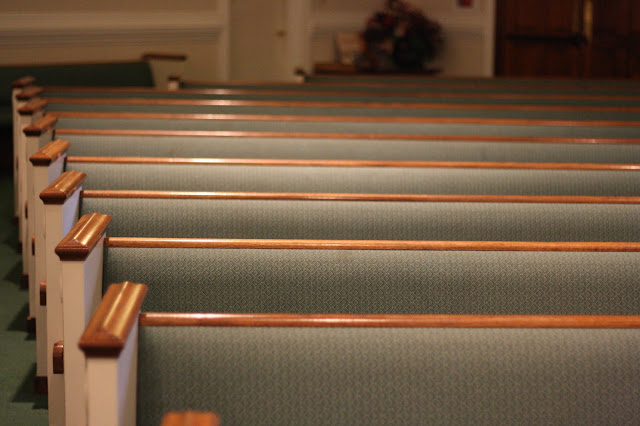 Nobody else had a model! 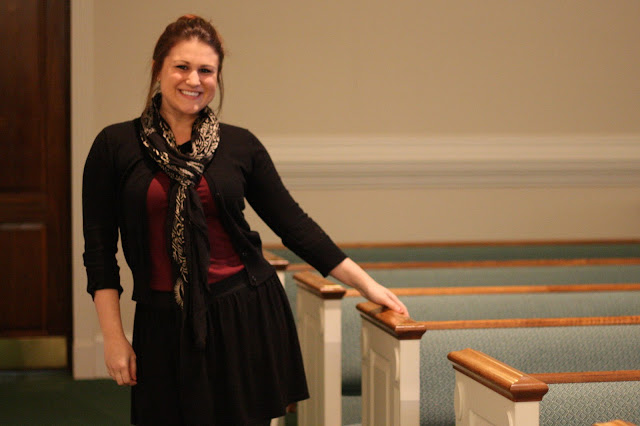 This is my favorite pic of the bunch, but you can't see very much repetition, which was the point of the photo.

2 - Showing Reflection
Notice I am saving the better ones for last. So maybe after you read this post you will forget about these! I was slightly embarrassed about this one, too, but Aaron actually liked it!

I will add that this one was done LAST MINUTE at work the day of the class. I thought i was just going to skip it because i didn't have time to find something to do a reflection photo with! Then, at work, we have these dark doors that show your reflection well, so i thought it was worth a try. Grabbed a coworker & here we go! :) 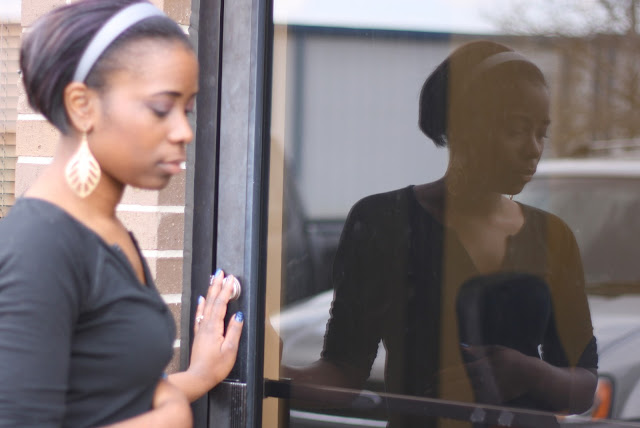 He actually liked it! HAHA! He said normally the foreground is in focus, and background blurry, but he kind of liked how my focus was on the reflection instead. He did say it looked like a pic from an pro-life ad... like - she's going in for an abortion and having second thoughts! Haha! Omg. That's awful. But true. It does look like that. Thanks a lot, Aaron.

I took this one too. I liked it. Looks like she's checking herself out! But i asked the opinions of others on which one to turn in, and i was outvoted. ;) 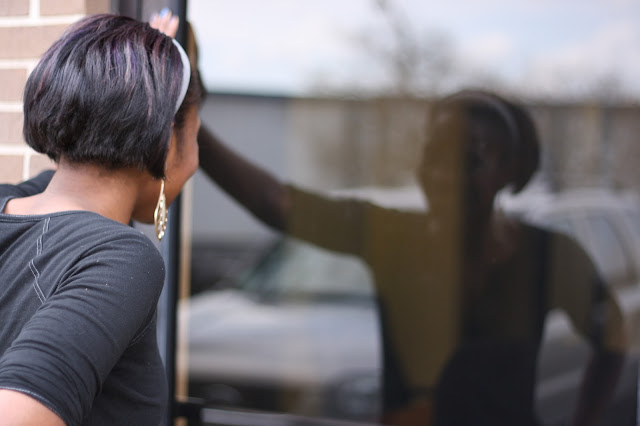 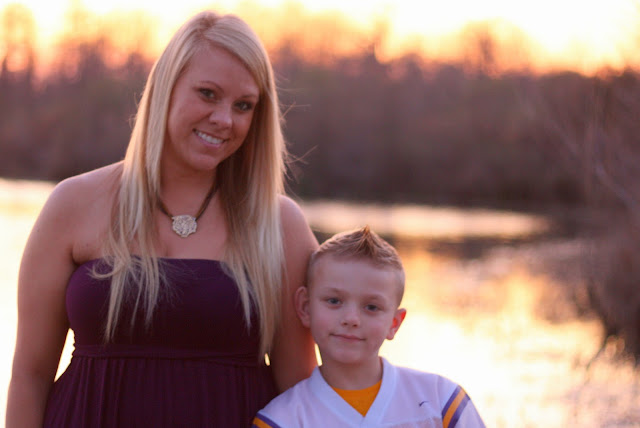 His only critique on this one is that it is slightly out of focus. Which bums me out. I thought it was in focus in my view finder, but once i put it up realized it's not completely in focus. But that was my problem as the night went on, simply because it kept getting darker. He talked to me about shutter speed, and losing light, and all that good stuff. :)

But what a sweet mother/son duo! My first photo shoot outside of my hubby & dog. :) Ha!

He liked it other than that. And i got a lot of help on some of my issues. Another girl had the problem i do with getting her meter in the center, so his answer to her kind of helped me. 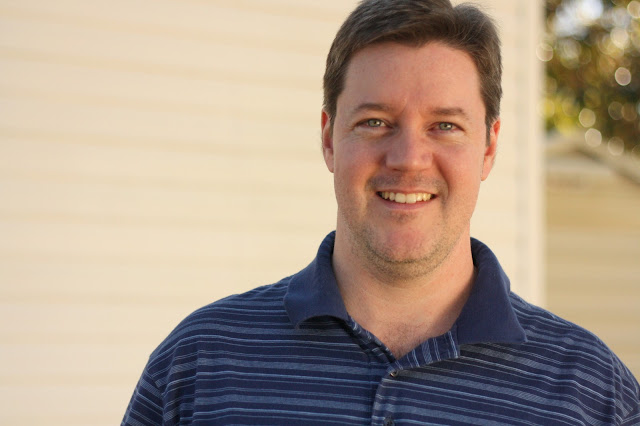 No idea why i didn't have my f-stop at 1.8. Anyway, this one got a two thumbs up! :) YAY. His only critique is his hair being cut off, but otherwise he thought it was a really great shot. :) Yay. The thing about his hair being cut off, though. Aaron cuts off heads & hairs & other things all the time, sometimes he critiques that on your photos & sometimes it's fine. Like tilting the pic is sometimes okay & sometimes too much. So.. i don't really understand when that is good & when it's not. And, no, i didn't ask. Haha.

After that we went into EDITING! And i did learn a few things. :) Not much. But it's a great start, for sure! And i will be shooting in RAW. Which, i had never known only changed your editing. I thought it changed the actual picture taking. Crazy. It just makes editing easier, basically.

So there you have it! And on Sunday we are going to the Rural Life Museum. REALLY bummed about missing church. The class was originally from 2-5 but later had to be changed to 9am. :( And i love my church, y'all. But oh-well. So we don't have homework this week. Rural Life on Sunday, and then class on Wednesday. YAY!

I am sad it's ending so soon. I have so much more to learn! But feel like I've definitely off to a good start. :)

Posted by Melissa at 11:47 AM
Email ThisBlogThis!Share to TwitterShare to FacebookShare to Pinterest
Labels: photography