This weekend I went to another bootcamp class at my friend Gayle's gym. Gayle is our church secretary & believe me... she is not like any church secretary you've met. She is one of a kind. And HILARIOUS... you should read her facebook statuses. PURE entertainment.

Gayle has also lost nearly 100 pounds, and she is such an inspiration to me! She is eating healthy & works out with a trainer 3x a week. This bootcamp class isn't really an official class. It's just something she got some friends together to do with her & her trainer. This was my third time going, and i am not kidding when i say it's such a fun workout! (And i'm not someone who likes to exercise... so it's saying something that i love it!)

Gayle's trainer, Heather, is awesome. She does the class like another bootcamp class I used to take. Each person is at a different station (station = exercise) & you do that one exercise as many times as possible until the trainer calls "time". Then you switch to the next one. I love it because you are only at each station for one minute. ONE minute! Then you switch to another station. So basically, even if you are DYING, you can just hang in there because in one minute you are done (until you are back at that station again... but still).

I mean, come on. I can do anything for one minute!

(Except planks, y'all. DEAR LORD, except for planks!)

I was excited because this time several friends were coming to join us. My good friend, Amanda, and her best friend, Brandi (who i just love!). And two other good friends of mine, Ashley & Ashley. Ashley M (blue tank below) came last week, too. Ashley V  (purple tank) is a really good friend, too, but she also used to be my zumba teacher. (She no longer teaches zumba - sad face!) 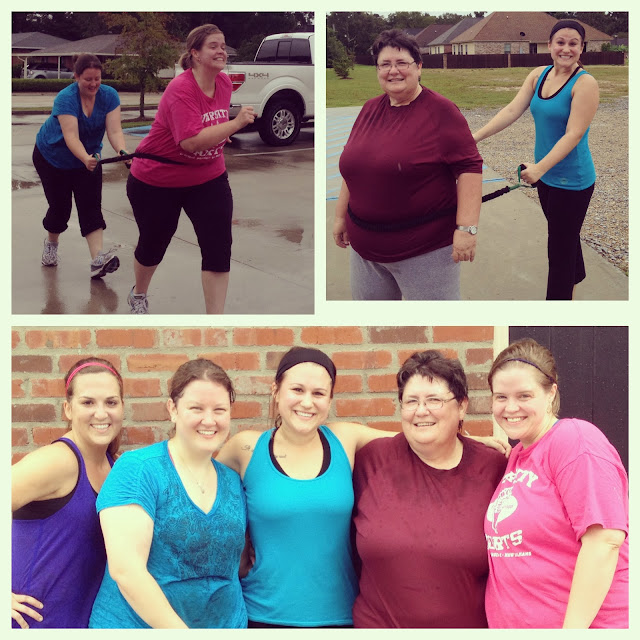 I was thrilled they all came. We had a BLAST. Yes, a blast working out. I kid you not.

Once we finish the workout inside, we normally go outside for some tire flipping! Haha! It is just more exercise - but it's actually a lot of fun trying to flip a 225-pound tire! Ha! I thought we wouldn't be able to do it this time because it was POURING rain when i got to the gym. BUT it stopped raining before the end of class and our trainer said as long as we didn't mind getting dirty, we could do it! Well, i mean, gee. We were already stinking like dogs from the first part of our workout. Why not?! :)

So we went outside for a little tire flipping! 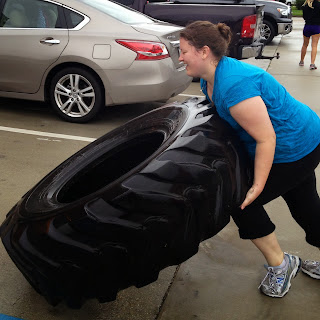 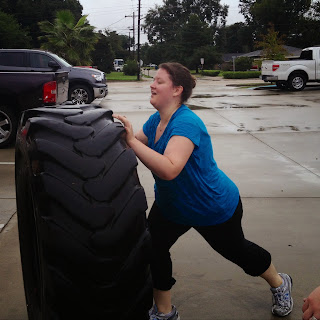 You usually pair up for this, but some people try it alone! I haven't yet - it is hard enough with a friend! HA! Amanda gave it a shot!! Woohoo! :) 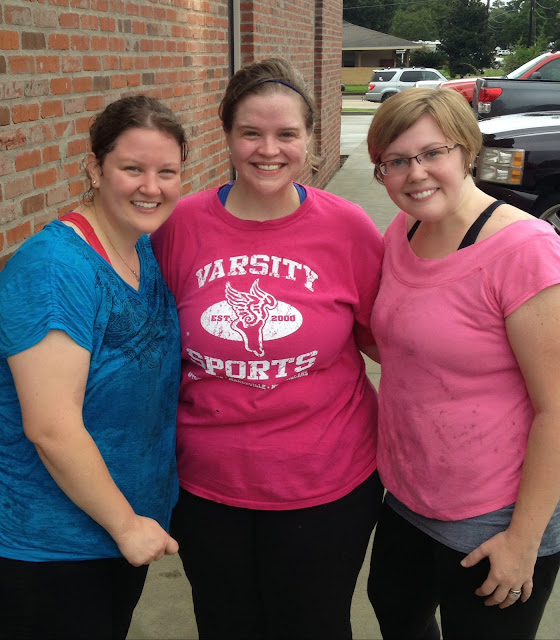 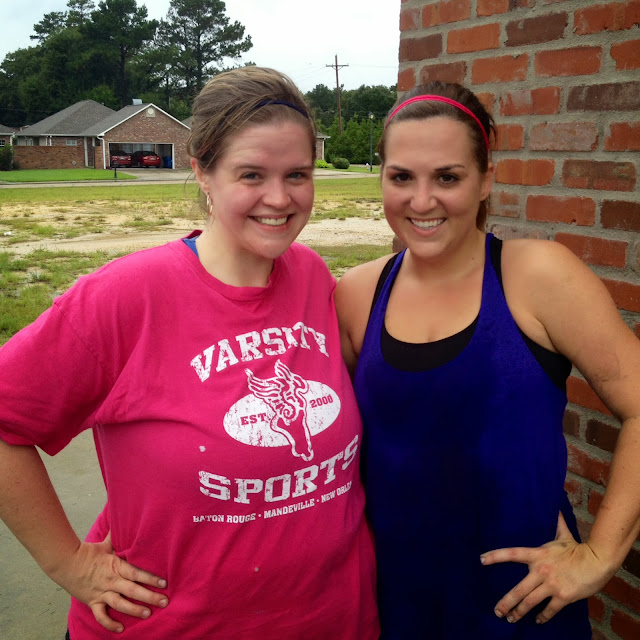 Me & Ashley V after flipping a tire together! :)

This time, Heather had a new exercise for us. We would run down the parkinglot with someone pulling a resistance band against us. Um... i THOUGHT this meant the person pulling the resistance band from behind would have it easy - WRONG! I thought I was going to fall flat on my face! Haha! It was pretty hilarious. :) 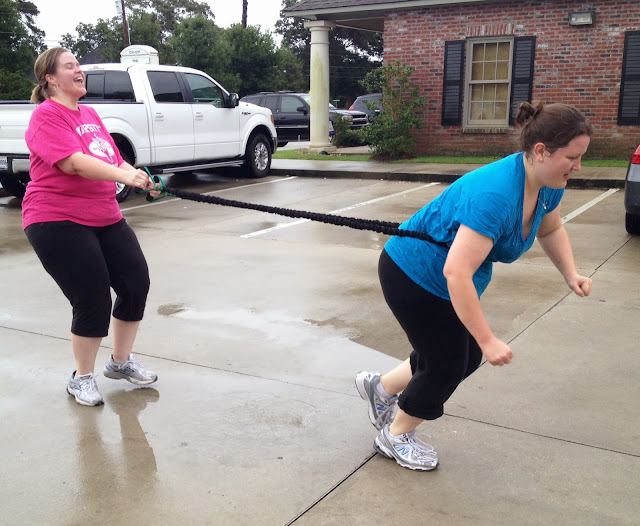 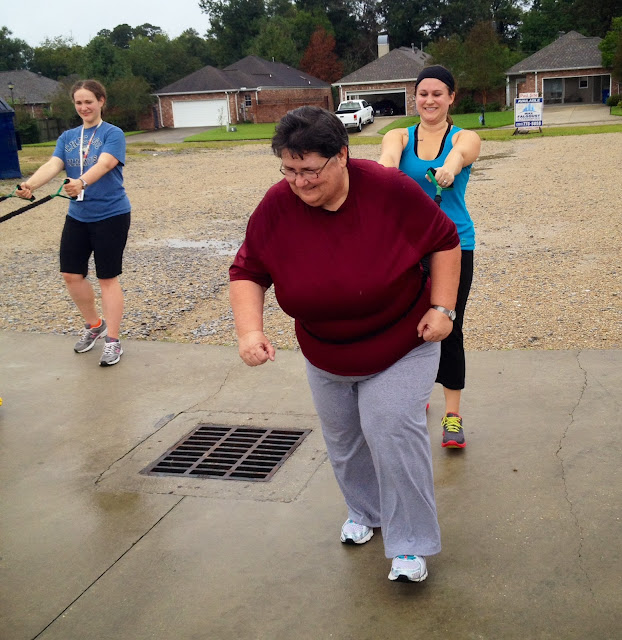 I took a video of Gayle doing this, and you gotta watch it to the end. Love her little glance at the camera at the end! She is a hoot! (Yes, i am the loudmouth filming!) (Gayle - if you are reading this, don't kill me! You said i could post it on FB & that's a lot more people than how many will see this! Plus most of these are strangers to you! And you can't deny me showing them this... it's too cute!)

(NOTE: Exercise in video is much harder than it looks! Ha!)

All that to say, bootcamp Saturday was a blast! I really wish i lived in that area - i would join that gym & go all the time!! ONE DAY! :) 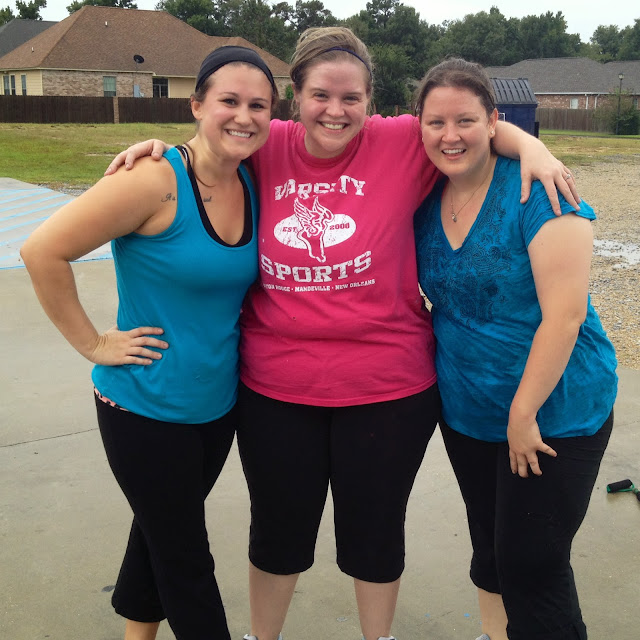 me with Ashley & Amanda - two of my favorite people! :)
Posted by Melissa at 9:28 PM
Email ThisBlogThis!Share to TwitterShare to FacebookShare to Pinterest
Labels: exercise, Friends, Health