I love the idea of putting a face to it. One in eight couples of childbearing age in the U.S. face infertility. So, that may sound like a statistic... and it is... but let's put a face to that number. 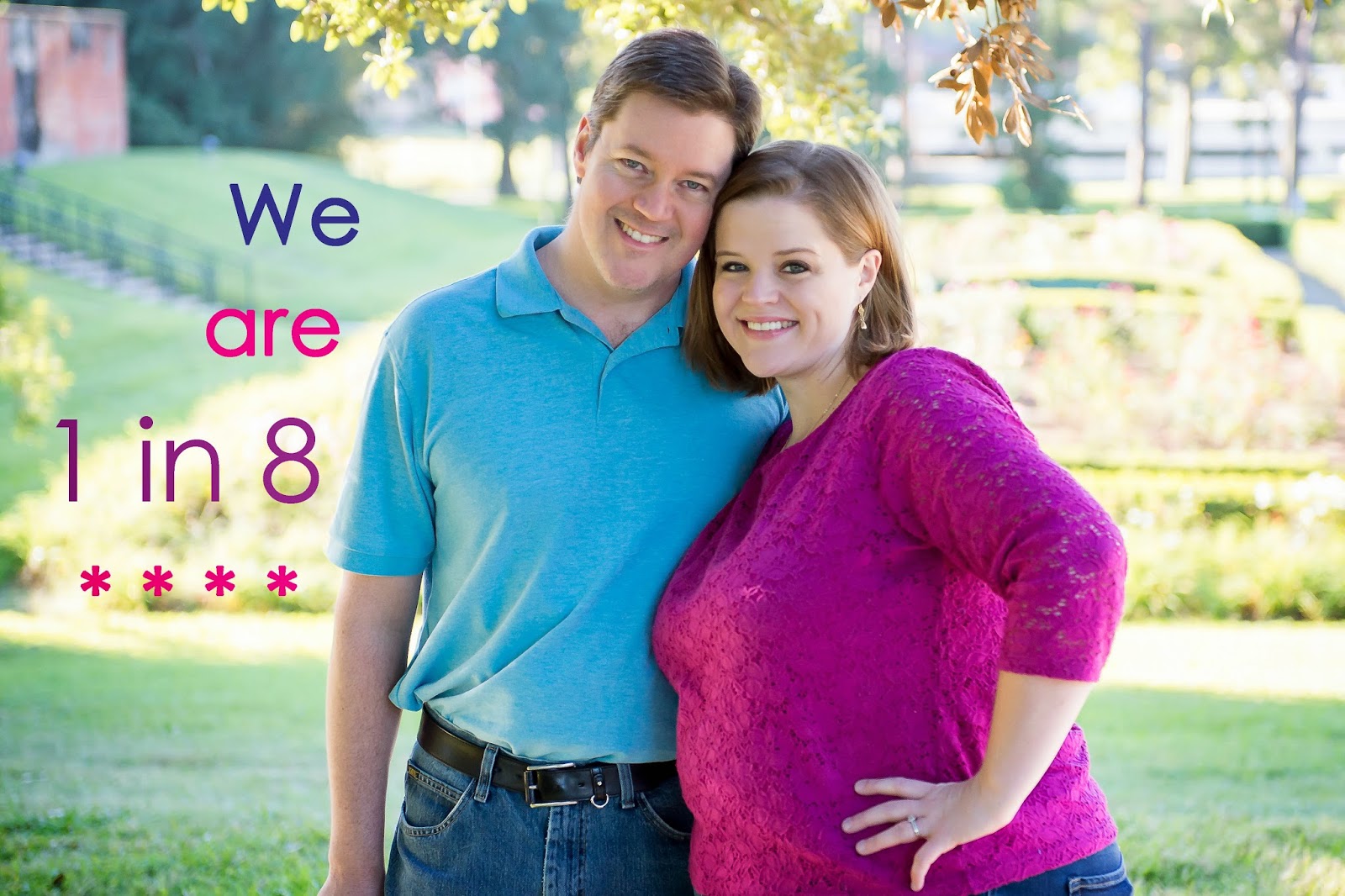 Infertility doesn't mean you will not ever have children.

I feel the need to make that clear because after i became a little more open about what we were going through (but before i went public, which i did after our miscarriage in March), i ran into an old boss at a store. I was buying a baby gift & she jokingly asked if it was for me. I said, "No... I wish!" (By this point of infertility, the filter was gone... i just told the truth.) So we got to talking about how my husband & I had been trying unsuccessfully for over two years and were seeking treatment. She said something along the lines of, "Oh, they say that when you're not thinking about it, that's when it will happen!"

When people say things like this, I don't get mad or upset. I used to, and i still might depending on what is said and how it is said. More often than not, though, I just enlighten them. Things like that are said out of ignorance. Knowledge is power. And let's be honest... if i wasn't go through this myself i wouldn't know either. So my response to her was, 'That may be true for people who have been trying for about 3 months, but when you are infertile, it's a little different. It's an actual medical problem."

Maybe i shouldn't have said "when you are infertile". Maybe that was a little too strong. It seems like if i had said, "when you're going through infertility" she wouldn't have reacted the way that she did, even though they mean the same thing. But i used the word INFERTILE & as a result, her eyes got REALLY BIG & she said, "OH. You're INFERTILE?!?!?!"

I just smiled and said, "It just means we have been trying without success for over a year. That's what infertile is. It doesn't mean we will never have kids. It just means we are going to need help to get there." And wow. The relief on her face was priceless.

You see, it's all about education. And i don't say all this to sound like I'm on some high horse. People just don't know. They don't know because they haven't been there.

-Most infertility problems in women are caused by problems with ovulation, such as PCOS or POI. Other causes of infertility are blocked fallopian tubes due to endometriosis, pelvic inflammatory disease or surgery from an ectopic pregnancy, problems with the uterus, or uterine fibroids.

-Male infertility problems are caused by varicocele, or sperm problems such as low sperm count, morphology or motility. Sometimes a man is born with the problems that affect his sperm. Other times they start later in life due to illness or injury.

As you can see this TRULY is a medical problem. Not just a matter of needing to relax.  Not just an issue of stress or bad timing or it not being meant to be, but a disease of the reproductive system. And this is why it is important to spread knowledge, to raise awareness. So others can have a better understanding of what it is.

Thank you for reading. By reading & understanding this post you have helped to understand those dealing with infertility. You are helping others who are, like us, that 1 in 8.
Posted by Melissa at 8:50 PM
Email ThisBlogThis!Share to TwitterShare to FacebookShare to Pinterest
Labels: infertility, resolve