We Miss You, Keith!

This is really late. I should've blogged about it in June. But I didn't. Well, I'm blogging about it now! It's just not something I want to leave out.

Most of you know that I have been involved with our local theater for the last 8 years. I auditioned in 2006 for the summer musical, Beauty & the Beast. I was cast in it as a villager & placemat. I had no idea that would be the beginning of a wonderful experience. A second home. A second family. I met so many people in that cast that are still good friends today.

Keith Dixon was the director of that theatre and of that play. I remember seeing him during dance auditions. At this point, I had finished my dance audition, and my vocal audition was the day before. I was just in the lobby, taking it all in, waiting to hear if i had a callback. He walked through the lobby, stopped and looked at me and asked me my audition number. I told him and he said, "I want to see you back tomorrow." He didn't tell me what part i was being called back for. But he wanted to see me back. I remember being a little intimidated by him. He just was so "in charge" & you knew he was someone to listen to and respect.

The next evening at callbacks, auditionees would go to the stage to sing when their number was called. You could tell by the groups on stage which part they were called back for. He would say, "If i call your number, please go on stage", and then he would call out a series of numbers. I remember seeing probably 25 potential Belles on stage. They all sang a song together and then one at a time had to sing a portion of the song. I remember seeing a beautiful brunette with the perfect singing voice and thinking "THAT is Belle." And she was.

Then he called up all the Gastons, then the Beasts, the Lafous, the Maurices, the Mrs Potts, and so on. At the end of the night, he had still not called my number. I didn't realize i was called back for Mrs. Potts, or i would have gone up! But i had never done this before, and he never told me which role he wanted me to audition for. (Obviously, I'm not a Belle or a Gaston... I should've guessed. But i didn't know how it worked!) Hundreds auditioned and there were at least a hundred at callbacks, so the time came for him to do a massive cut. He said, "If I call your number, I need you to stay. If i do not call your number, I need you to go ahead and leave." & he added info about when the cast list would be posted & all of that. He called out a bunch of numbers (not mine), and then said firmly, "If your number was not called, I'm going to have to ask you to go ahead & go now." He wasn't being mean, but he had a show to cast and it was already getting late. He hadn't called my number but I hadn't auditioned! I was terrified to approach him, but I had to. He was standing in front of the stage, facing it, with audition forms spread out in front of him. I walked up behind him and very timidly said, "But what if we didn't get to sing?" He swung around and said, "You didn't sing?! Sh**!" LOL. I said, "I'm sorry, I didn't know..." & he said, "That's okay, that's okay. I remember how you sing, I want you to stay and read for a part."

I'm SO GLAD I said something to him, because I was cast! No, i didn't get Mrs. Potts, I got ensemble, but i was ecstatic! And I had no idea then that would be the start of many years working right next to Keith in auditions after auditions as his stage manager! I knew nothing then, but now I have a wealth of knowledge about theatre and the way it works...about casting and stage management and even directing that I never would have known. And i absolutely LOVE the world of theater. It is SO MUCH FUN. 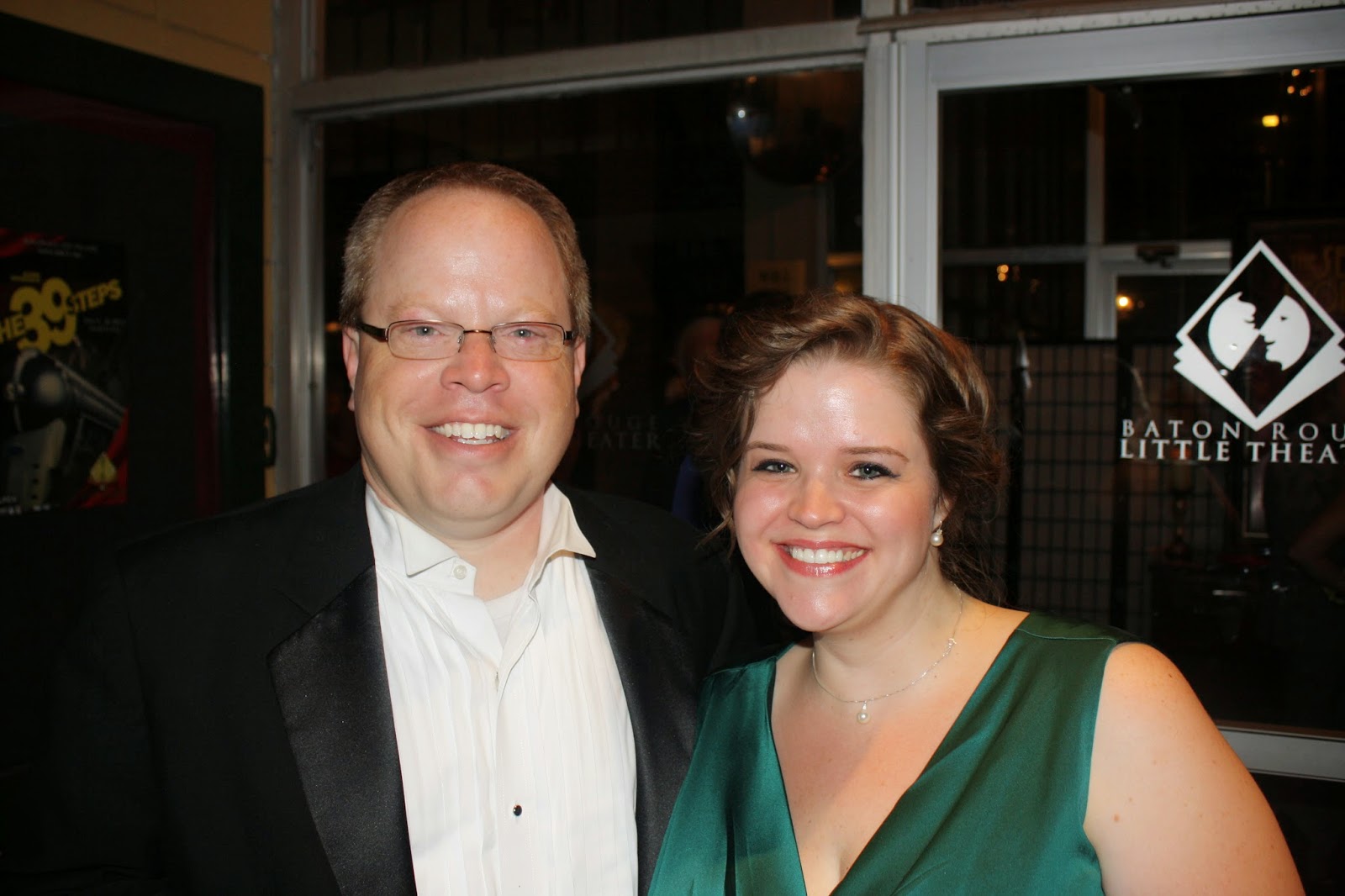 I have so many other memories of Keith as well. I worked next to him as his stage manager for numerous productions. There was a time when he was the ONLY director i would work with (having had bad experiences with other directors). He knows how to treat his volunteers. He was (and is!) the very best. One of my best memories of Keith is when i was stage manager for Agnes of God. The mother of a good friend of mine had committed suicide that day. I had loved her family, and her mom was no exception. It was a difficult day, very hard to wrap my head around. I found out that afternoon, but i kind of walked around in shock. I didn't cry or anything - until in rehearsal that evening. Keith was not the director for that production, but he sat in on a production meeting before rehearsal. They were talking about something at the end of that meeting, and i was totally off in space, thinking about my friend who was gone. I glanced at Keith, and he mouthed the words, "Are you okay?" He knew something was not right. I barely nodded. After the meeting was over, everyone except Keith walked off. We had a break before rehearsal. He looked at me again as if to say, "Are you sure you're okay?" And i told him i had lost a friend that day, and i just started crying. He was like, "Come on, walk with me." We walked off and he asked me what happened, and kind of let me spill. It meant SO MUCH TO ME. He is not a guy who is afraid of tears, he always has the right words. He really is the best! I have so many other fantastic memories from working with Keith! Too many to share!

I am telling you all of these memories, because Keith took another job in Spokane, Washington... just a LITTLE far away from Baton Rouge, Louisiana! I knew this day would come eventually... just didn't know when. He stayed at our theatre for 10 years, and made it a better place. He did SO MUCH to improve our community theatre. He moved away in June, and he is SO MISSED! I ran sound for Annie, and every time i drove into the parkinglot I would look for Keith's car out of habit! I used to look for his car when i pulled up, and would think, "yay! keith is here!" when i saw it. He is just a great guy to have in your life!

One of Keith's best friends, Jeff, who also does a lot of acting at our theatre, planned an AMAZING going-away celebration for Keith before he left! It was really THE BEST! Keith knew something was being planned, but had no idea what it was. We filled the theatre - it was packed!! - before Keith arrived. He was instructed to text one of our stage managers when he arrived. When he did, she went to his car & escorted him in. He walked in and immediately everyone was on their feet cheering for him! It was awesome!! He was led to his seat...third or fourth row, center. They had all his favorite snacks there (popcorn, probably recees or snickers or something, and most importantly - diet coke!). And then they put on an AWESOME show in celebration of Keith! It was truly FANTASTIC. I wish i had it on video. So many inside jokes, stories, and mini-performances from the plays he did in his ten years as director. He obviously means so much to so many people. 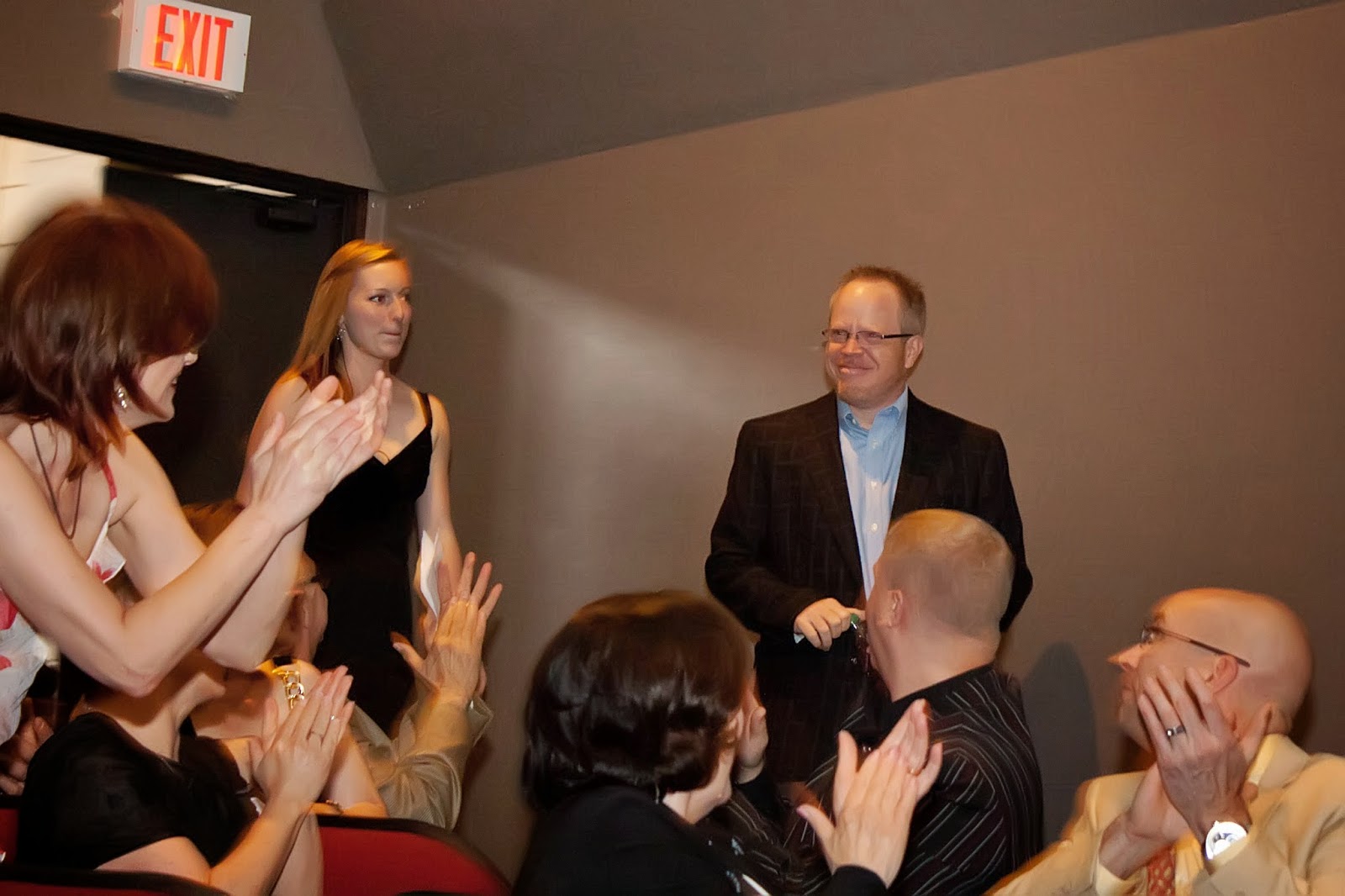 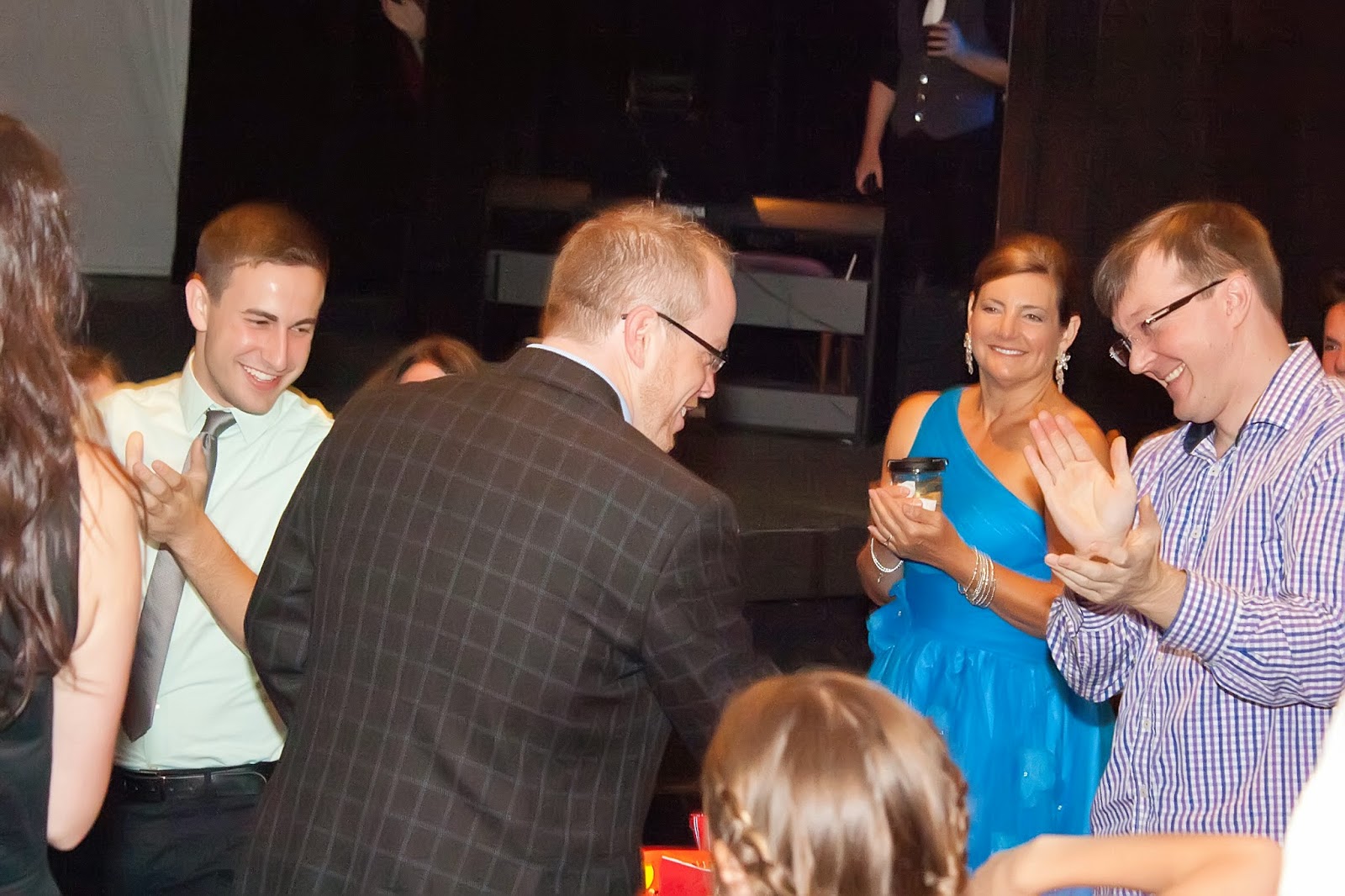 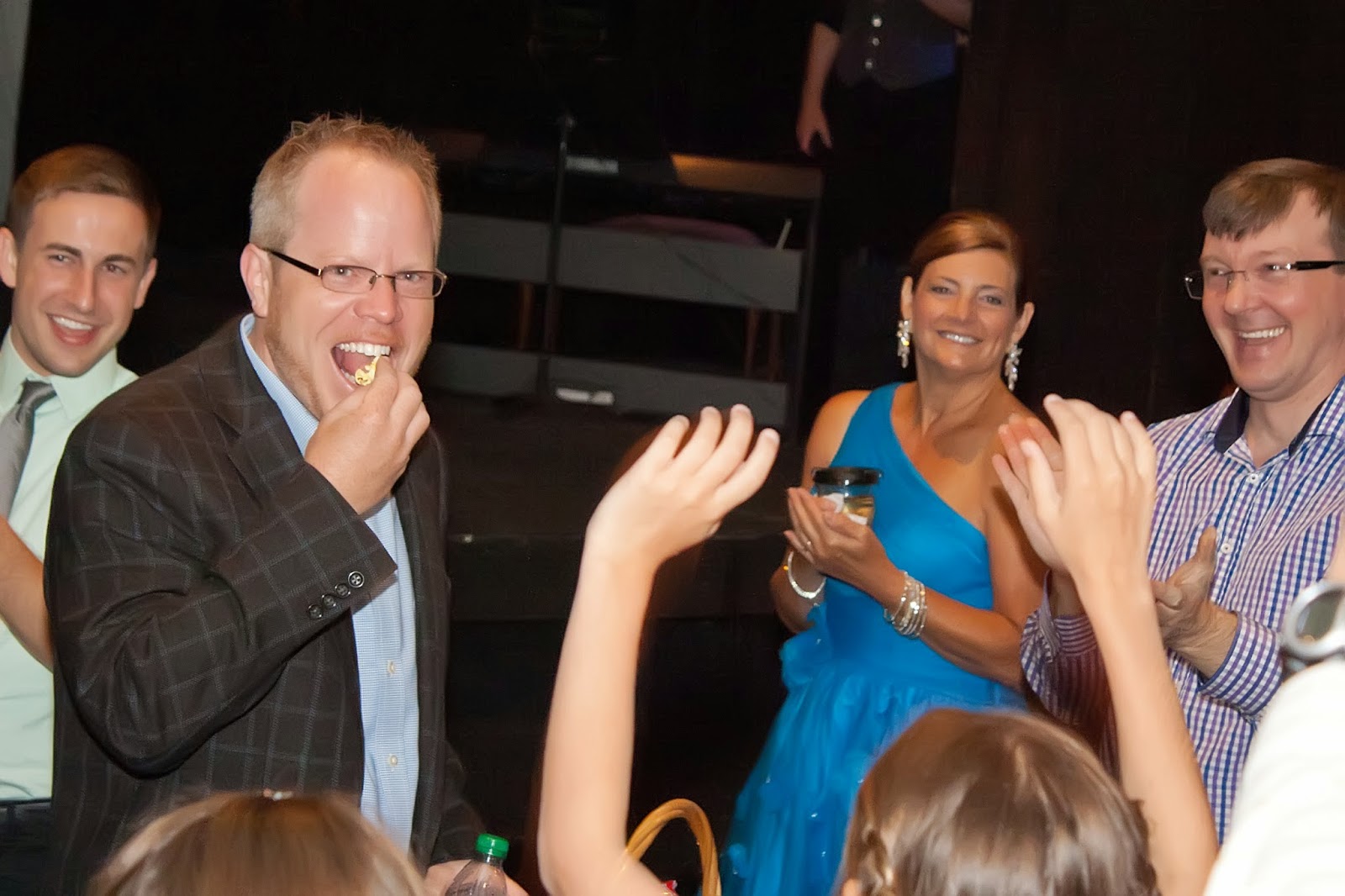 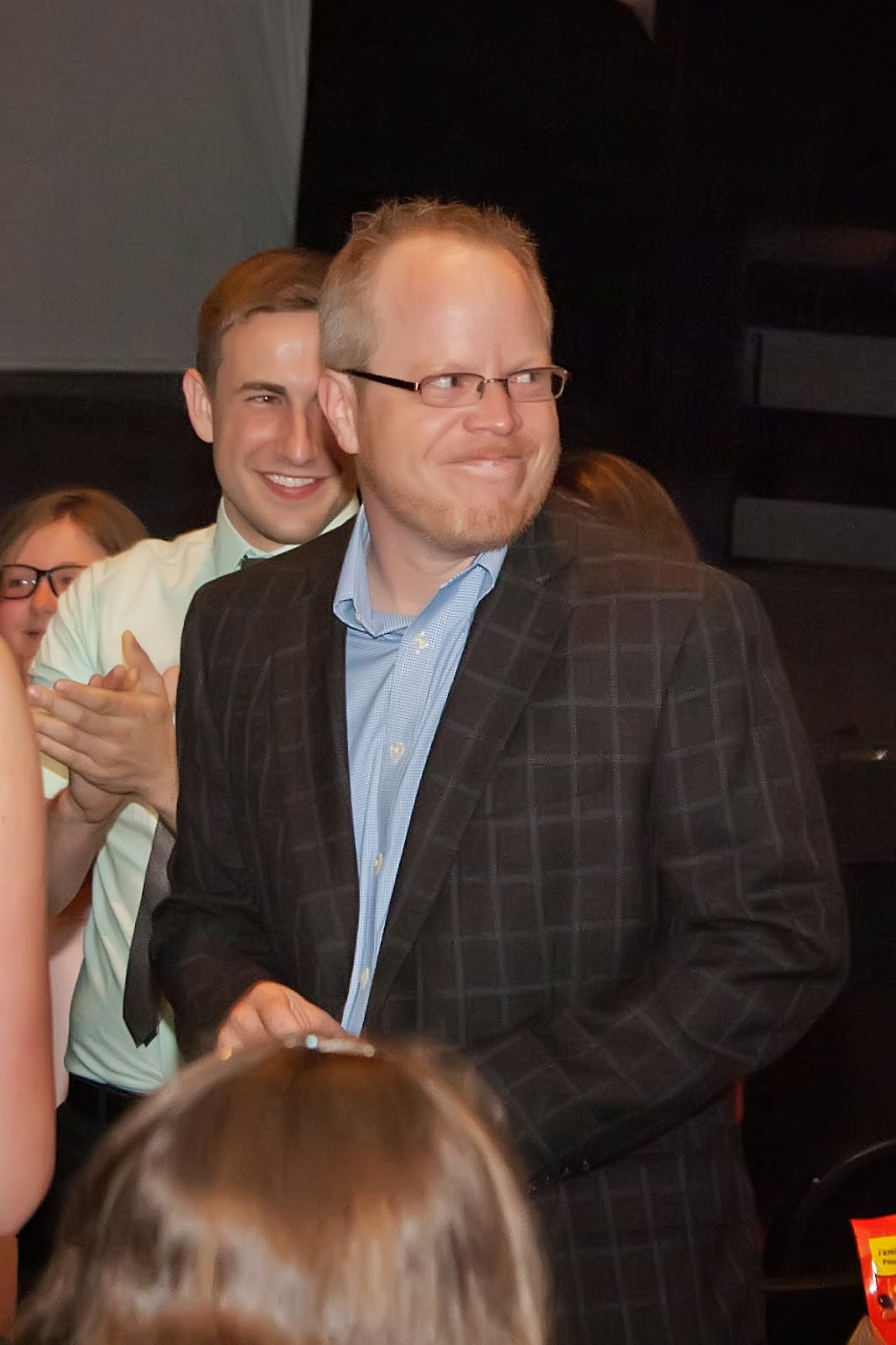 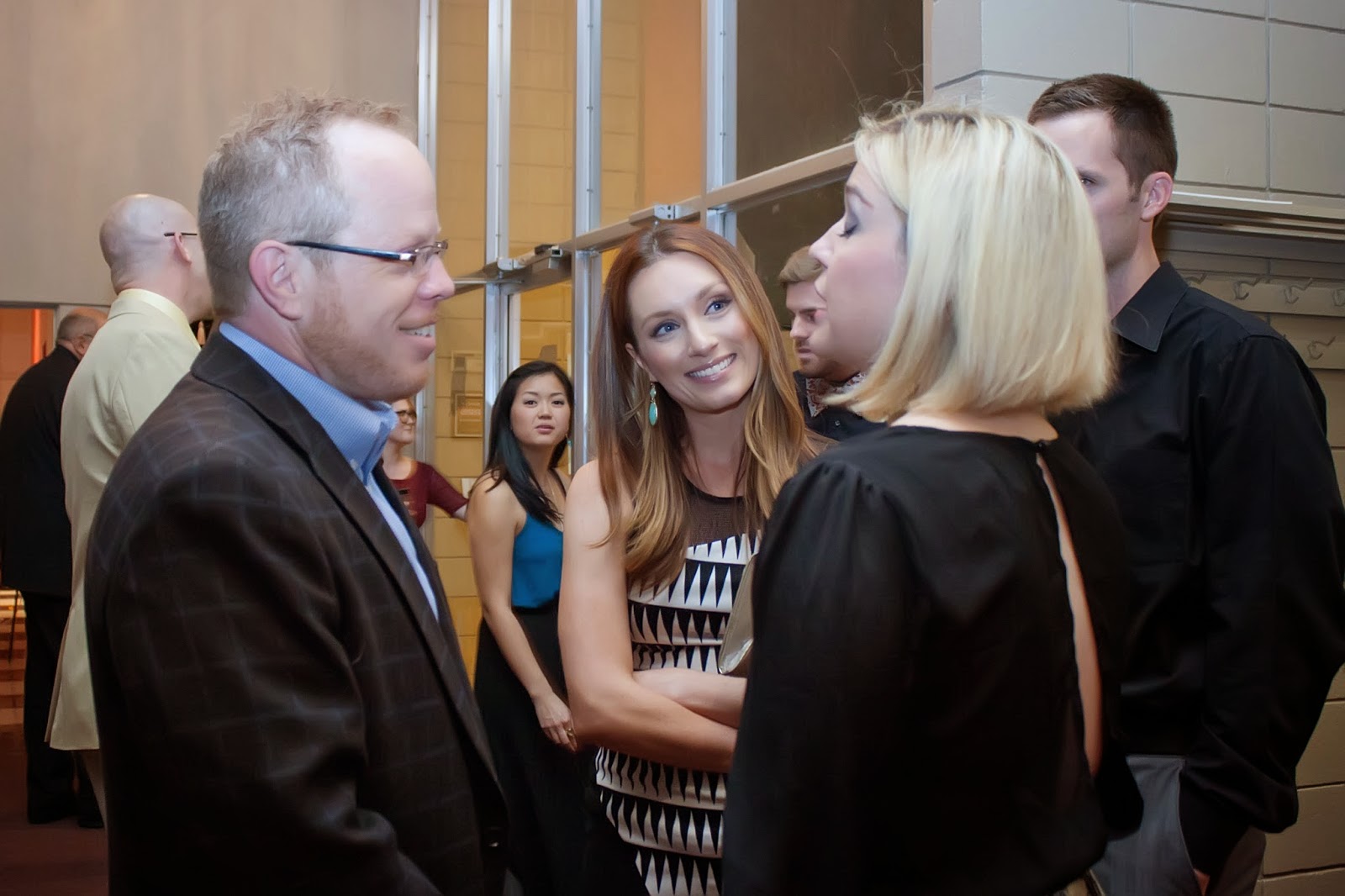 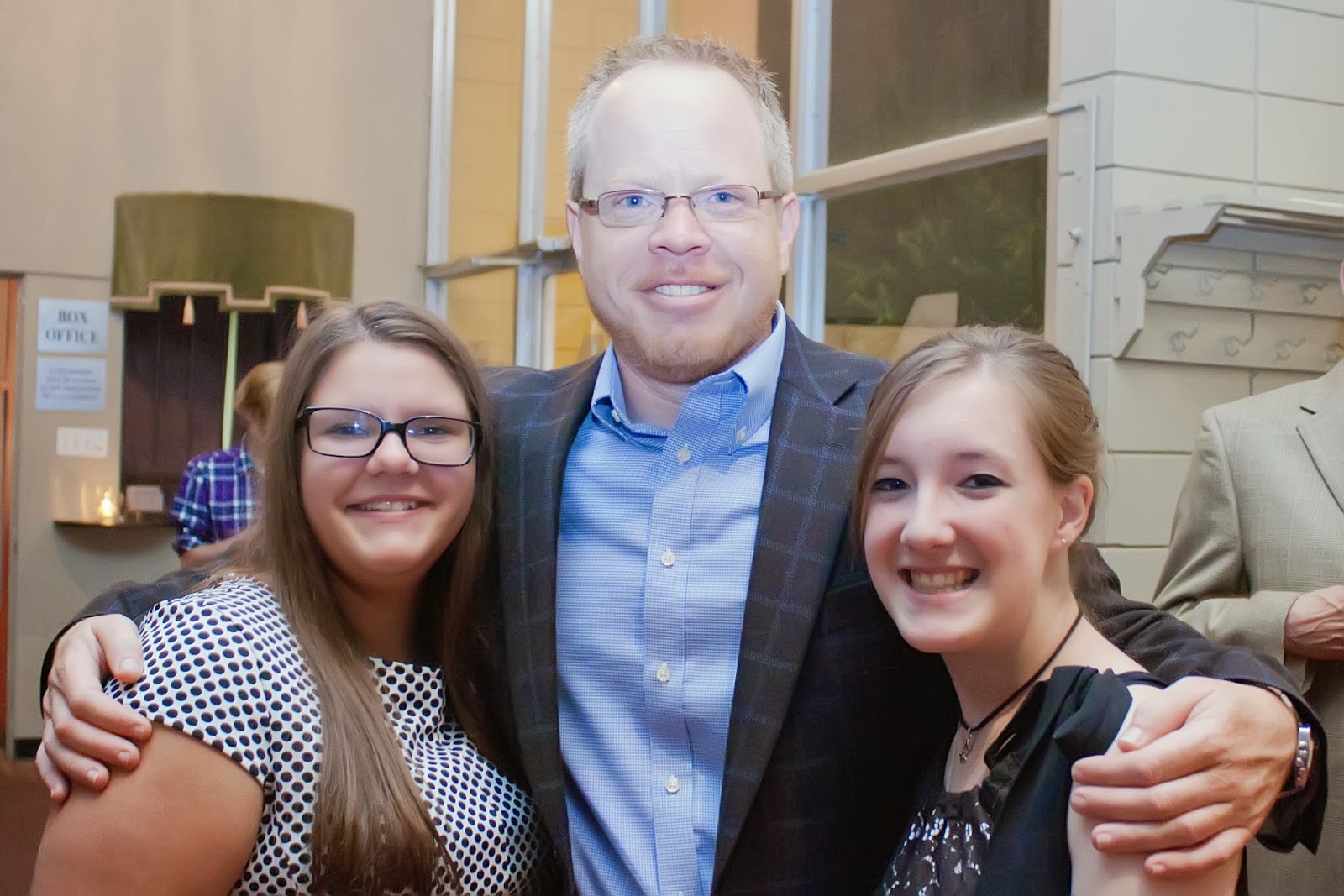 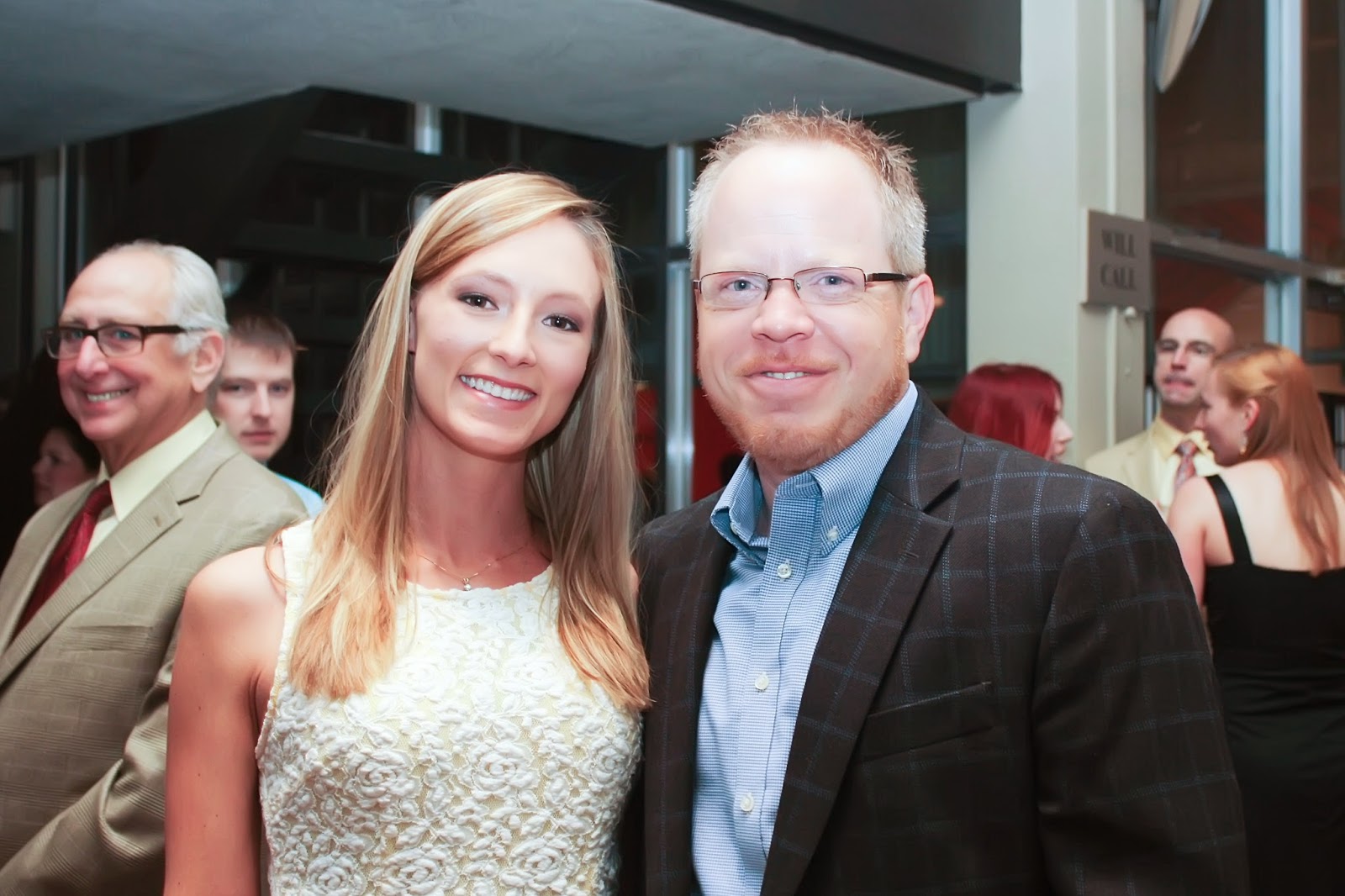 Keith & Natalie - one of my friends from Beauty & the Beast 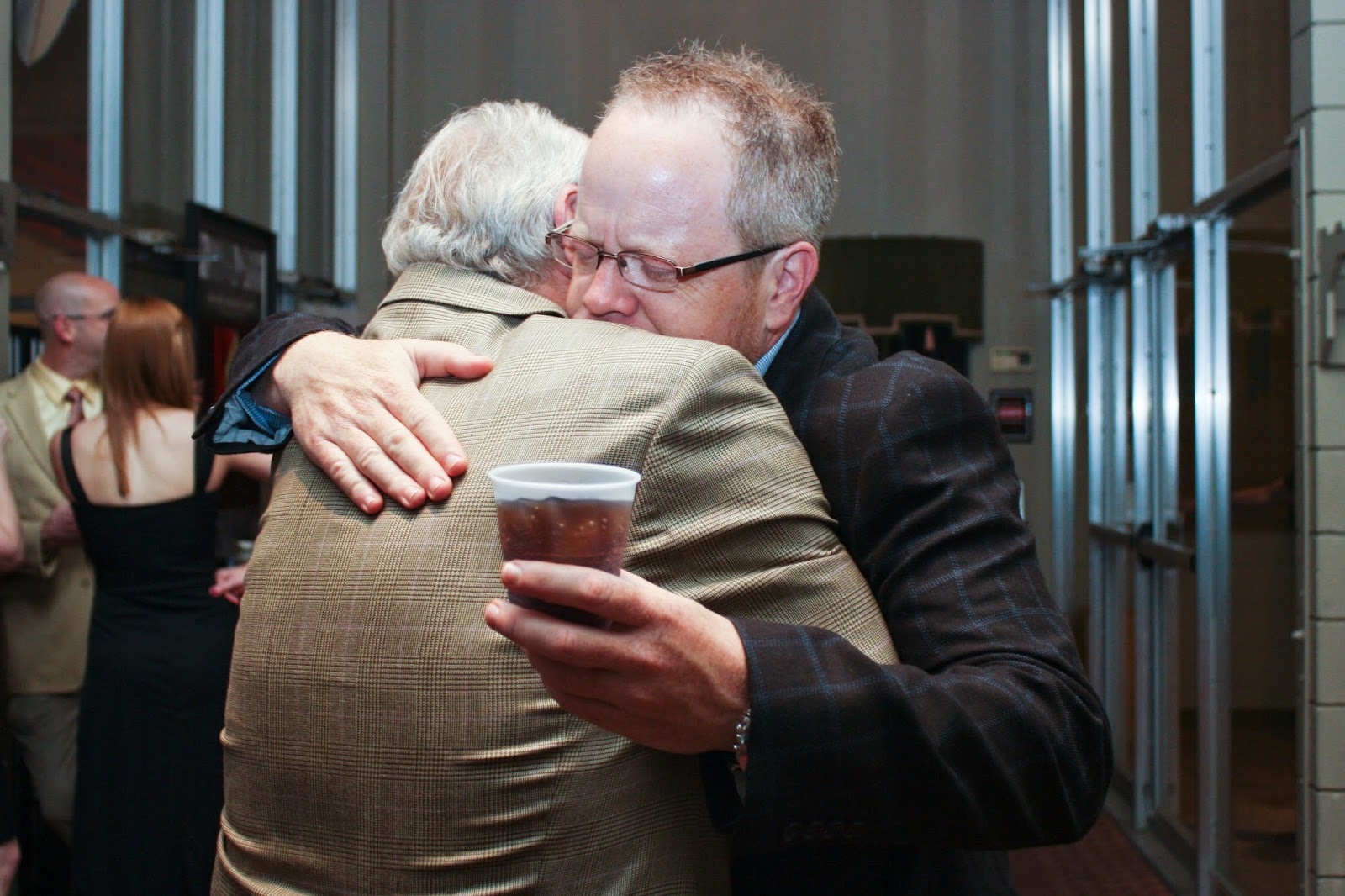 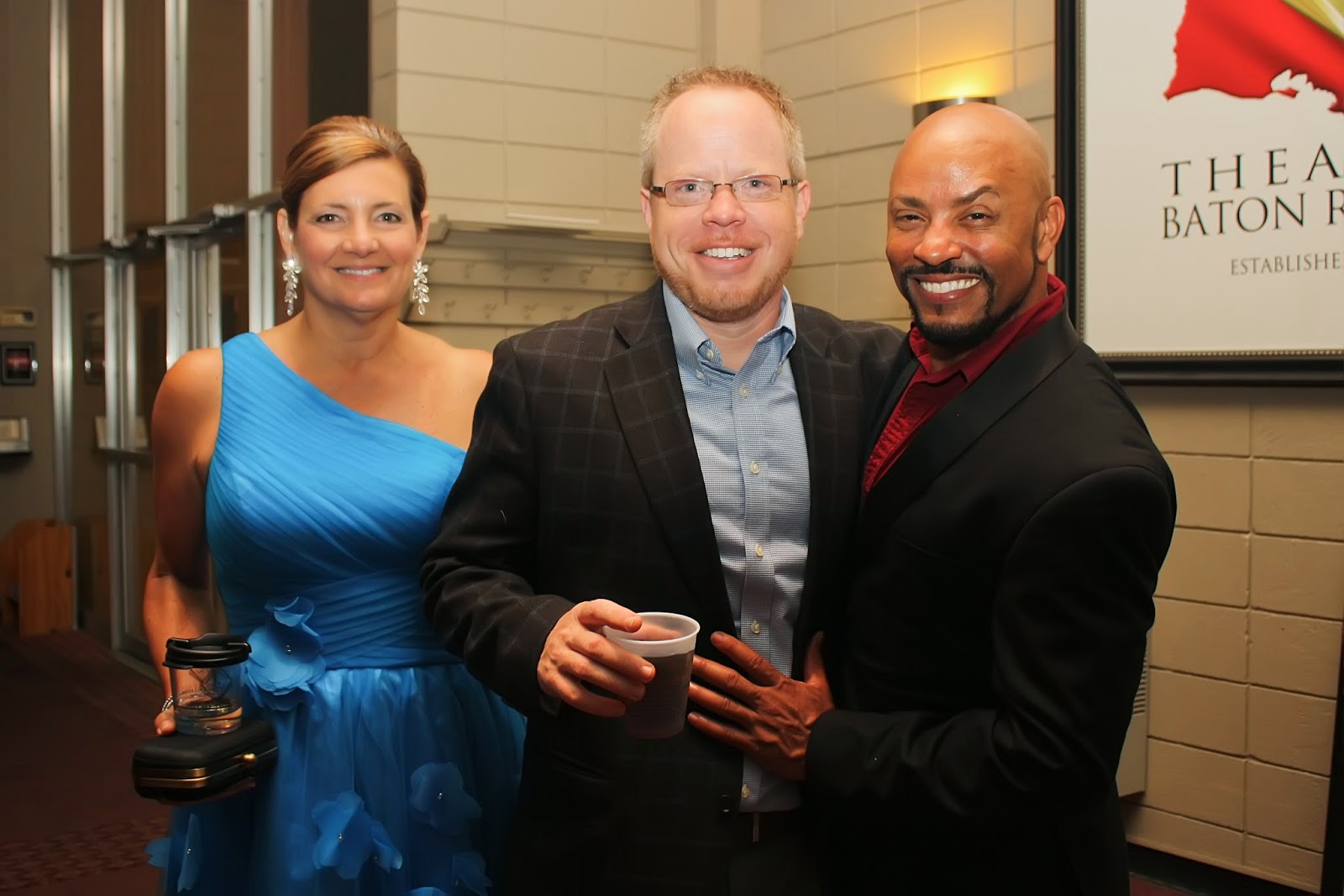 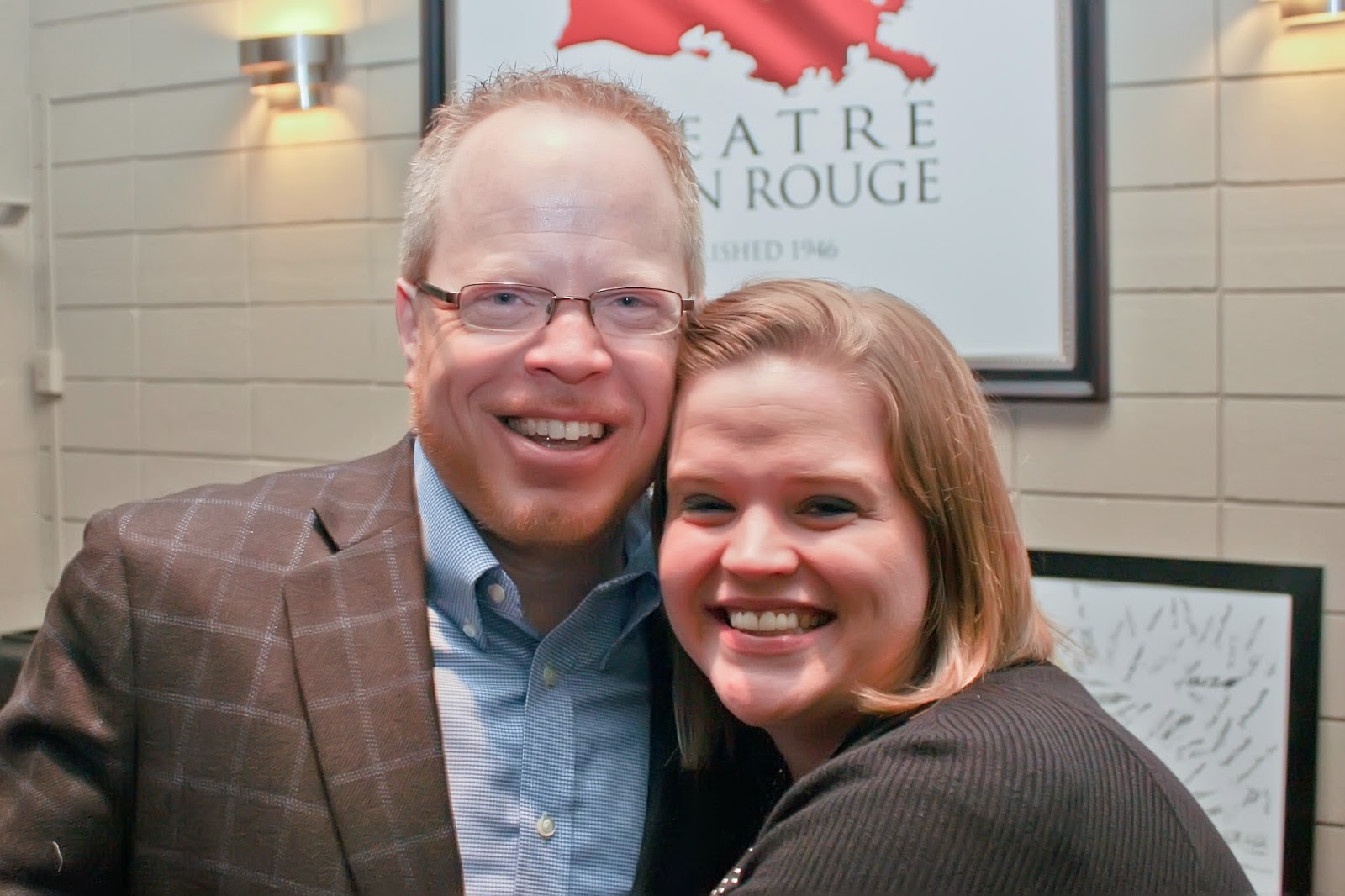 Terrible pic of me (we were laughing at something), but i love it anyway! 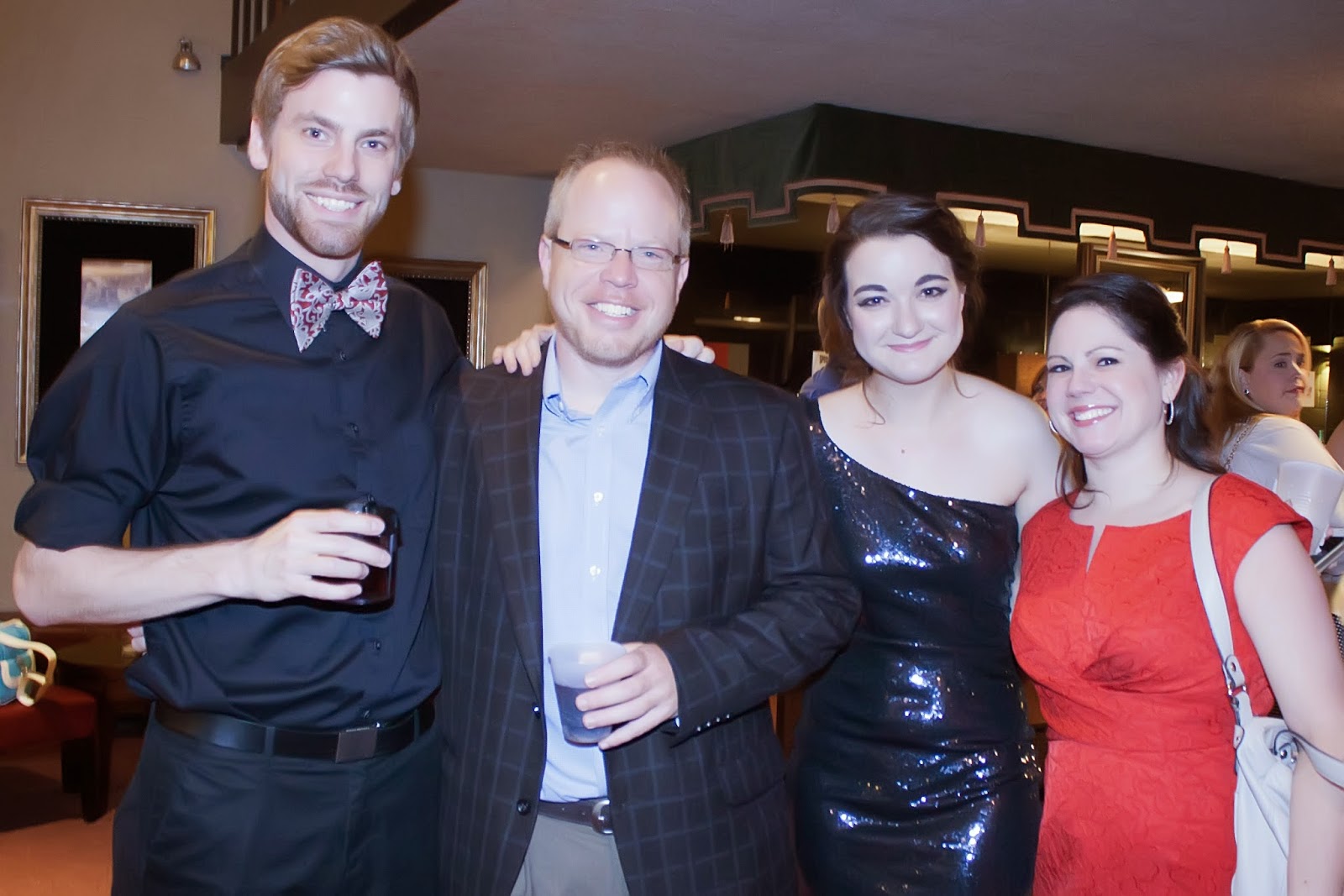 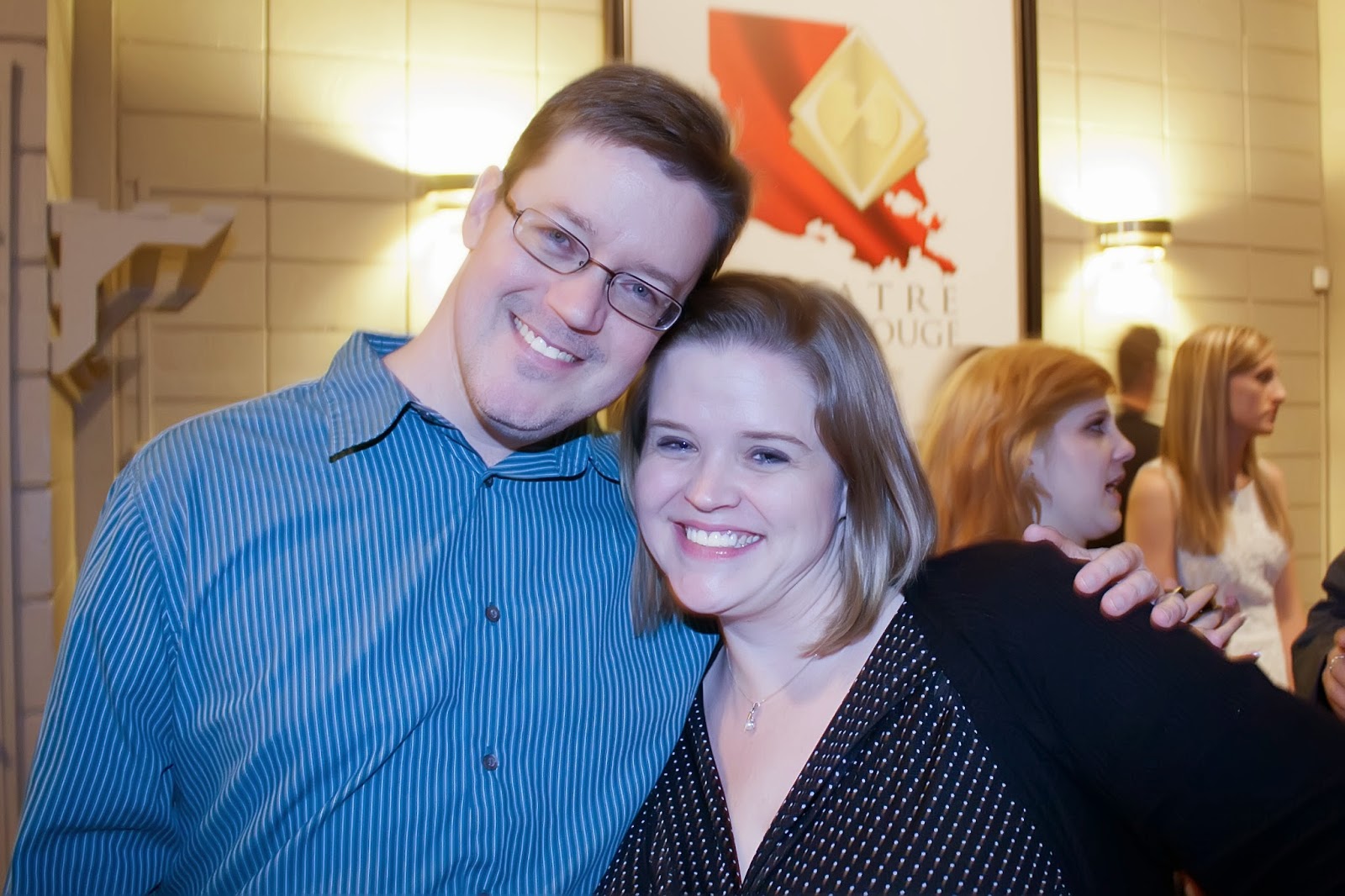 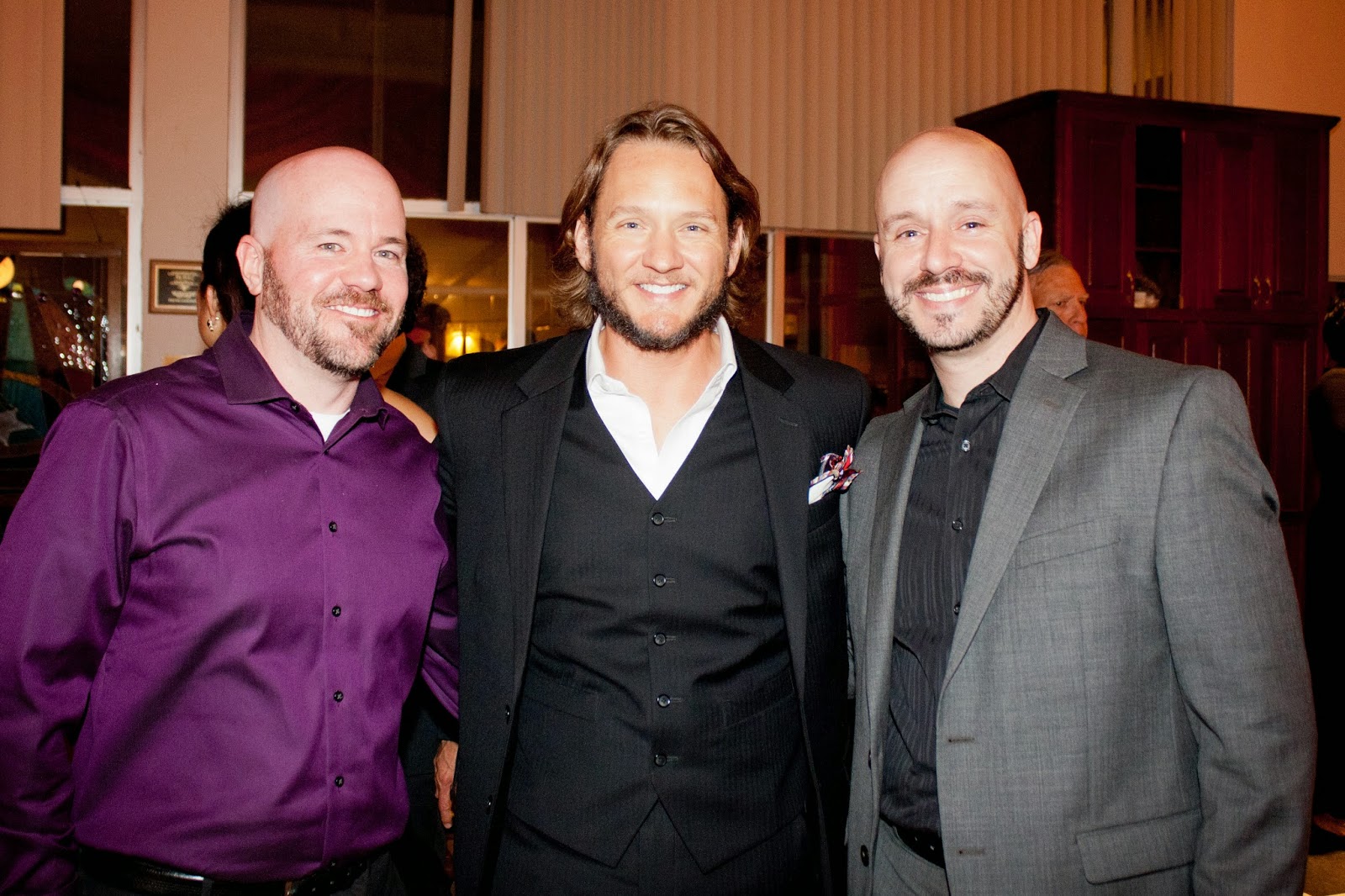 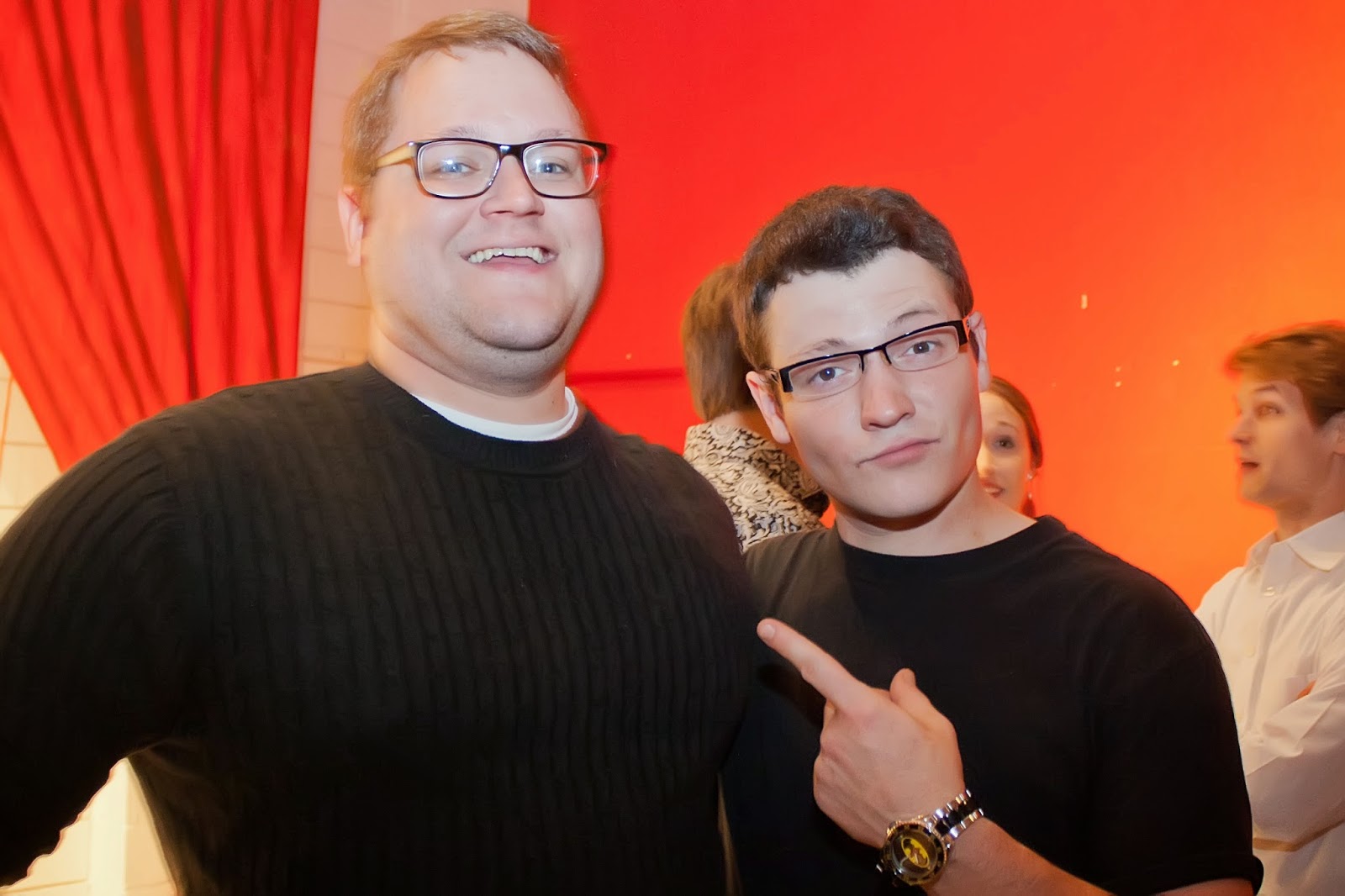 These two are hilarious! 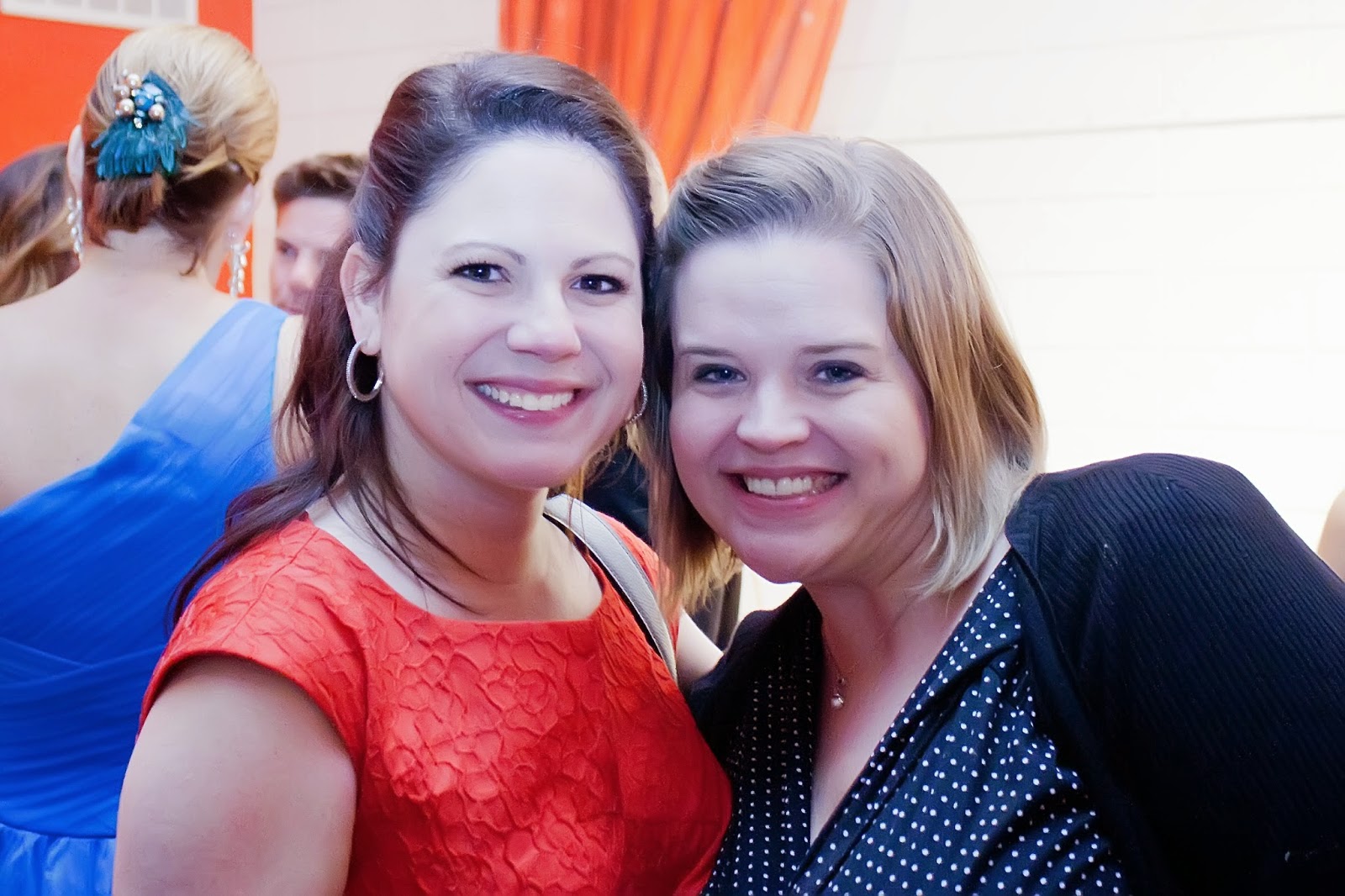 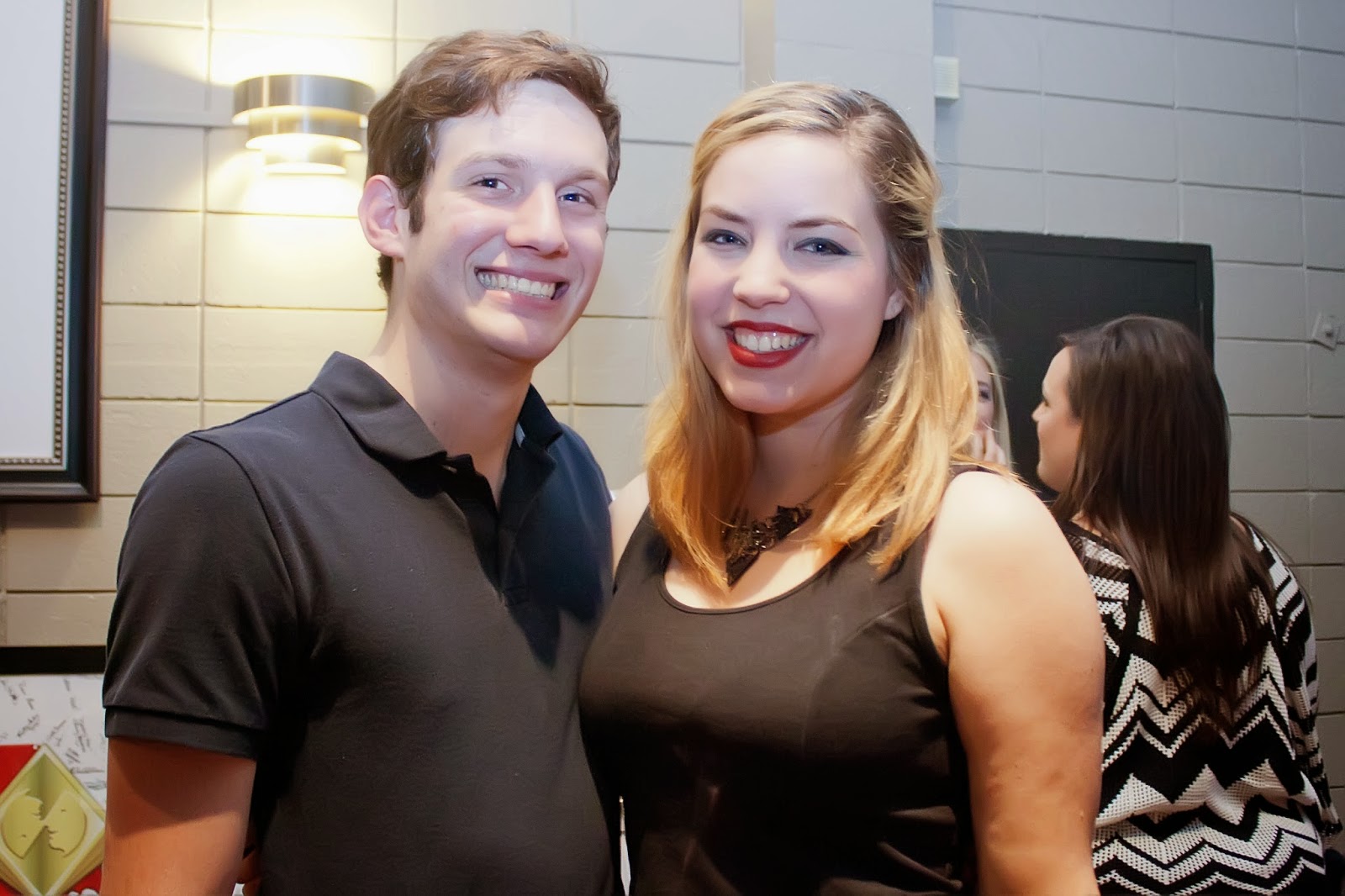 Just a couple weeks after his going-away party, he came to opening night of Annie. He would be leaving the next day. I ran sound for Annie & was so glad to get another hug before he left! 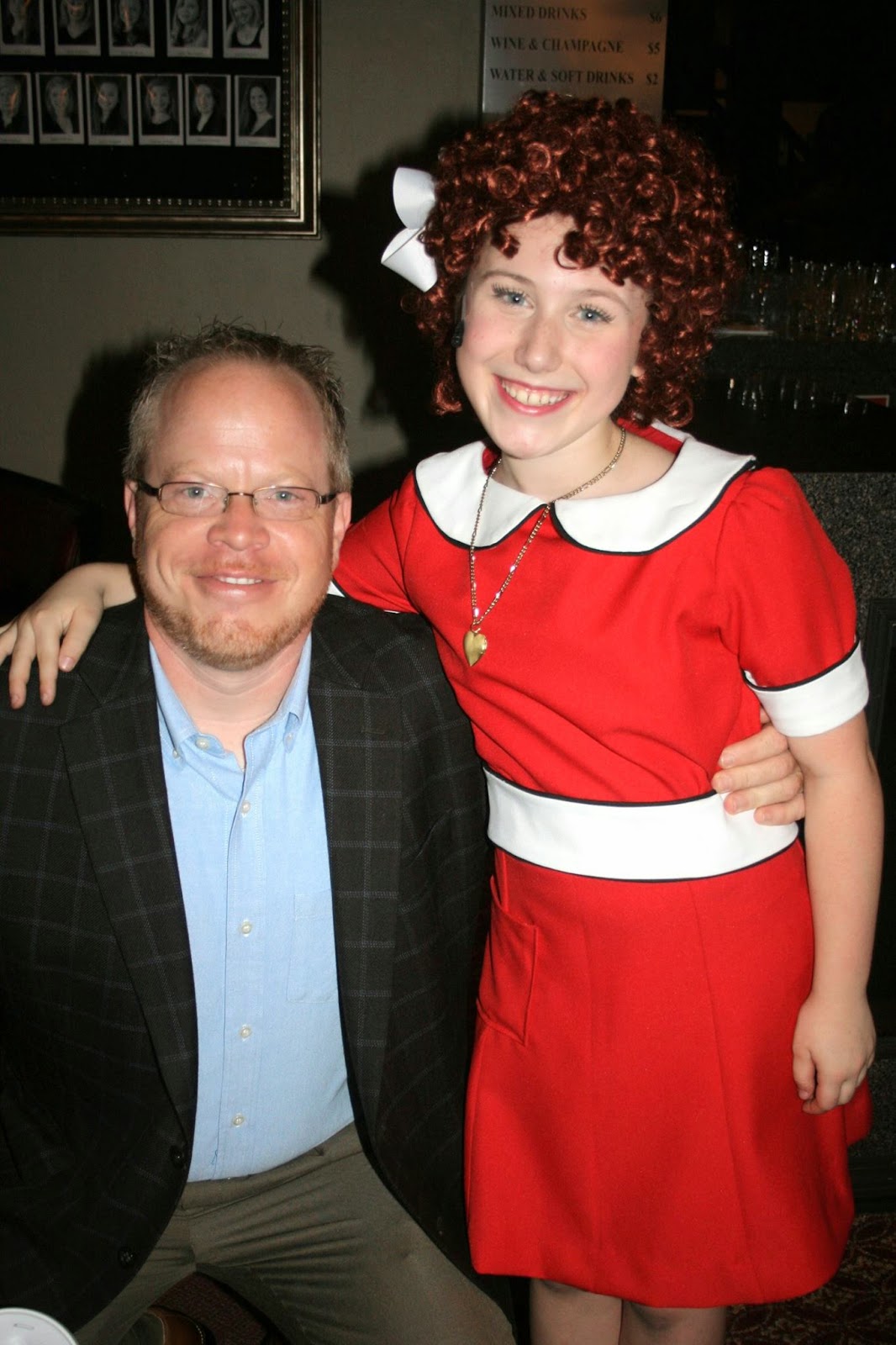 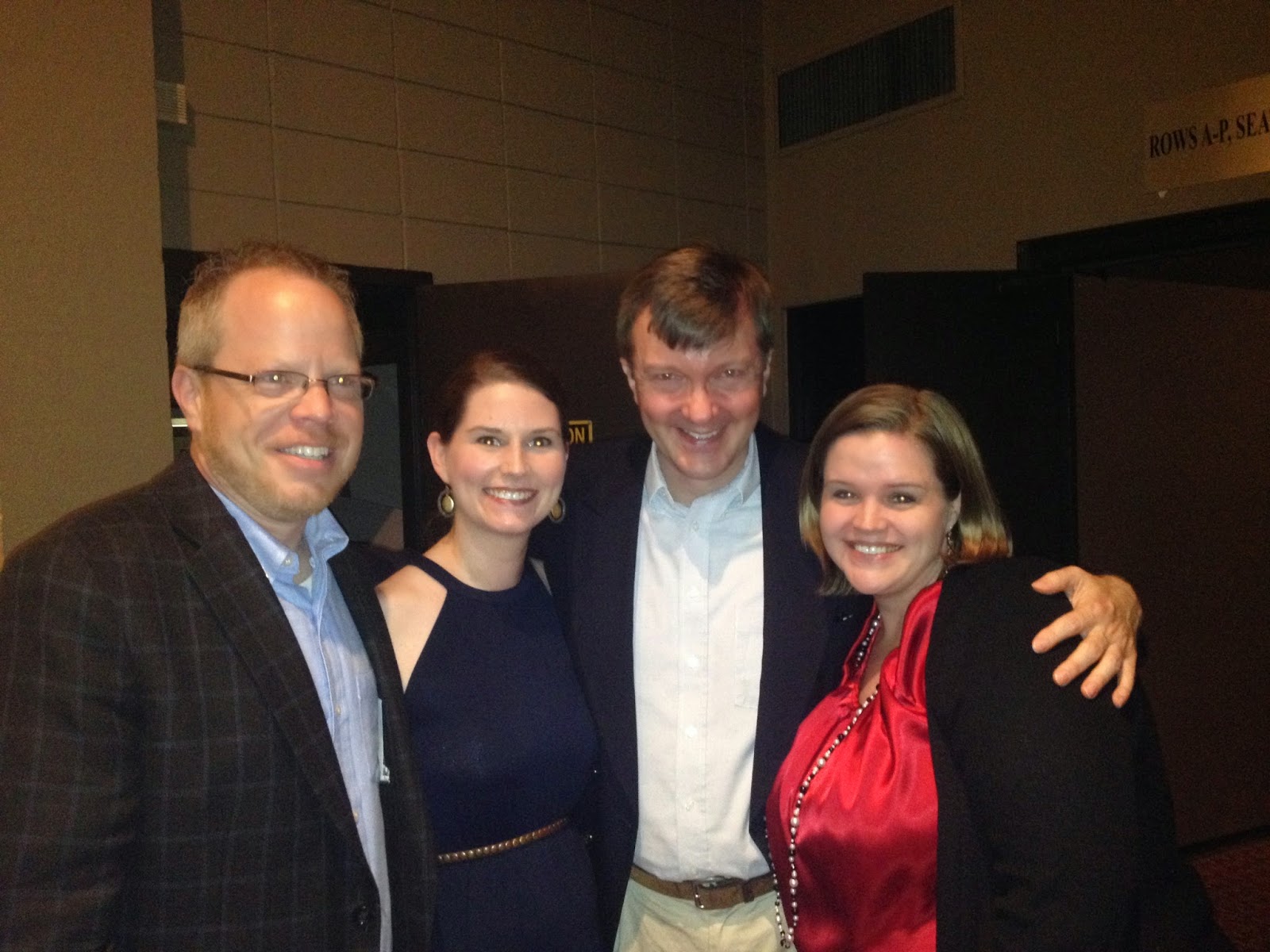 This is Keith, Mary & Richard. As i said, Keith was director for Beauty & the Beast in 2006. Richard was the music director. That was Mary's first show at TBR as well as mine. In fact, I sat next to Mary at my first rehearsal! Crazy to think here we are taking pics with these two guys, 8 years later! :) (Mary also met her husband in the Beauty & the Beast cast!) 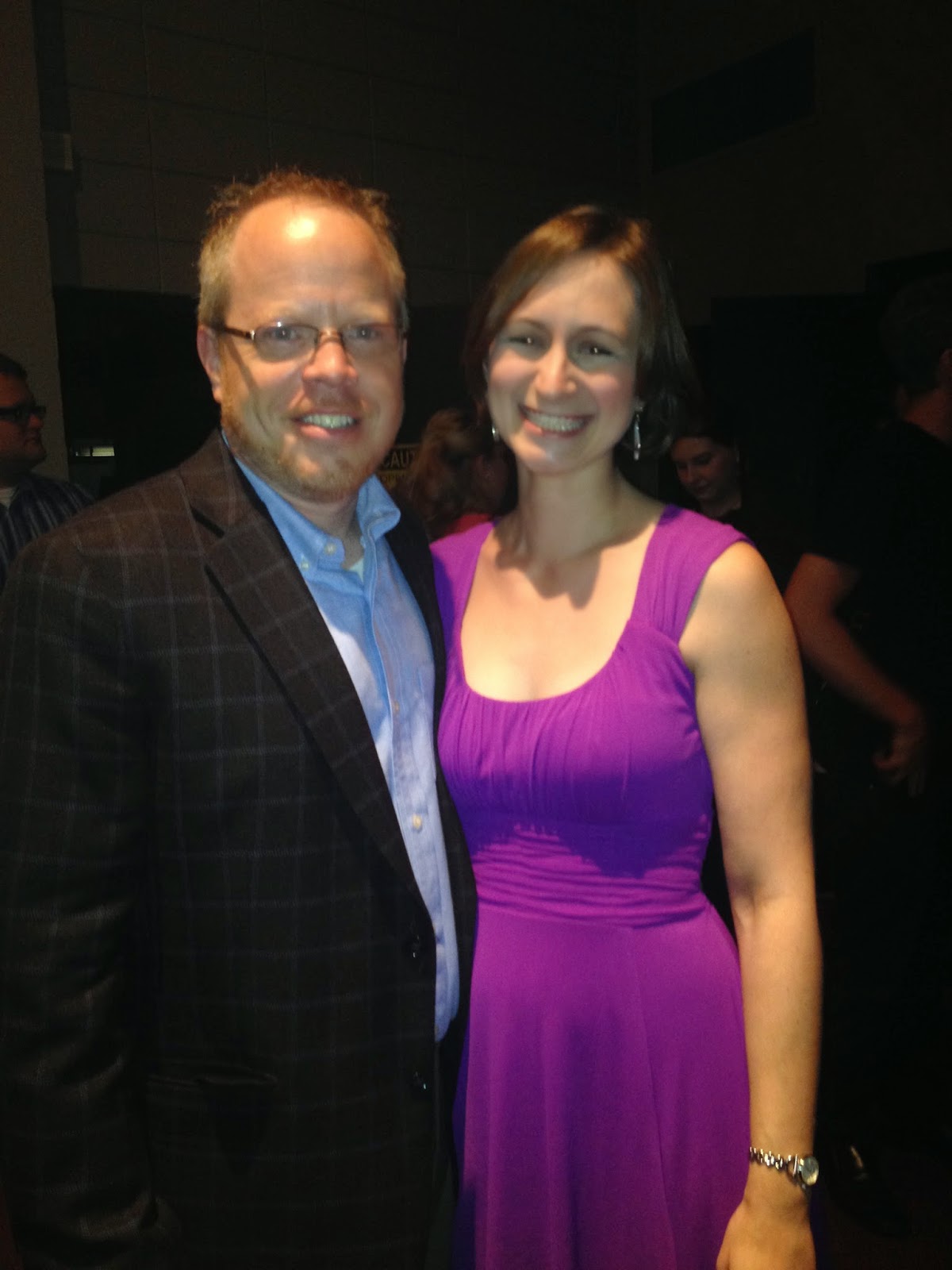 Emily has also left us... she announced it shortly after Keith announced leaving. Emily & her husband got jobs in the theatre department of a college in Oklahoma! So awesome! She has been the theatre's resident tech director for several years and she is an AMAZING lighting designer. She also does choreography. Emily is really just super talented & smart, and i have learned a TON from her! She is also a great friend! They just left this month. Love her & miss her greatly! 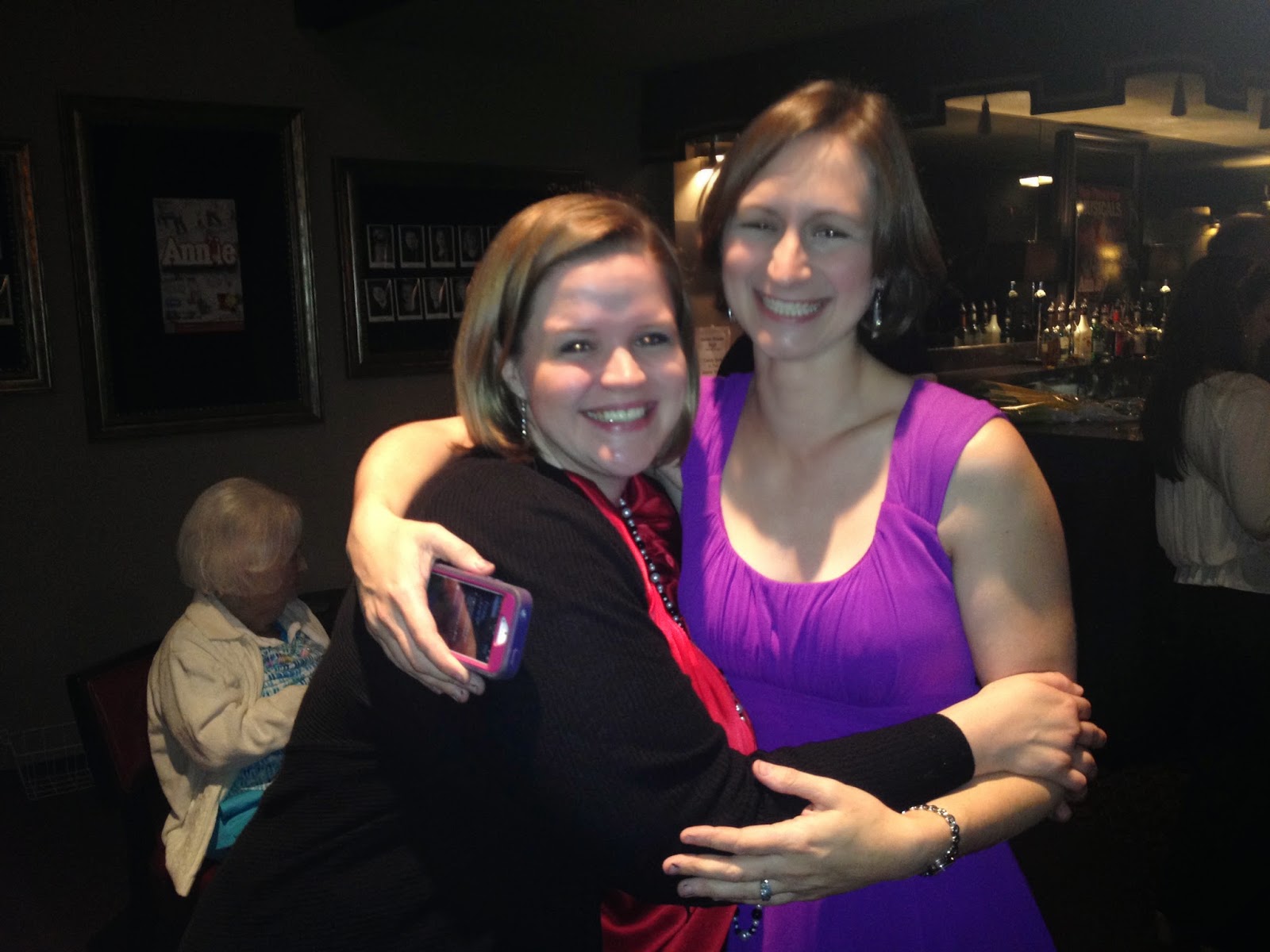 Sorry this was so long! But there was so much to say! Keith made a huge impact on my life while he was here, and i feel so lucky that my time at our theatre was under the leadership & direction of a wonderful talent and friend, Keith Dixon. We miss you, Keith! 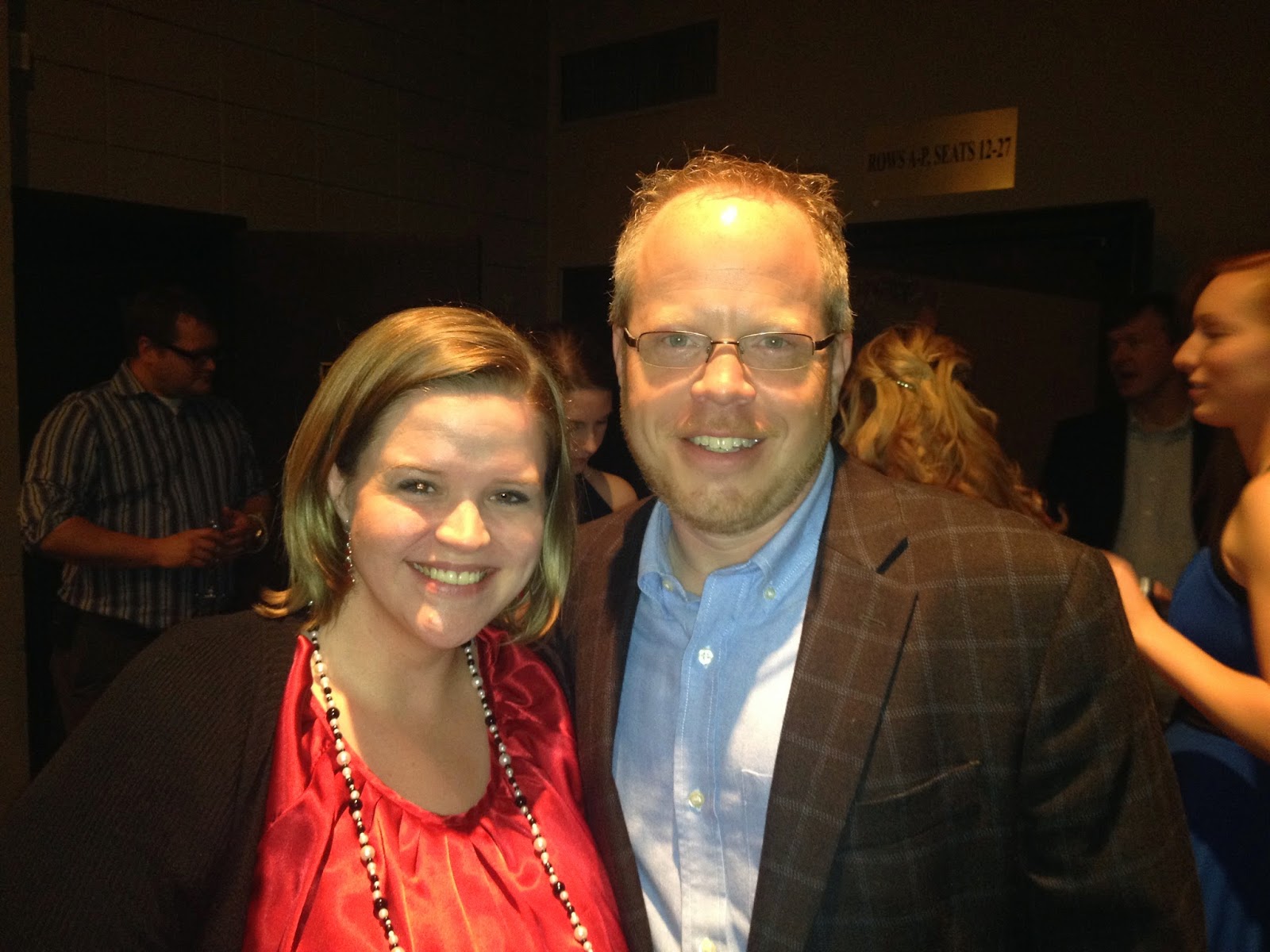