Last weekend, Brad & i went shopping & we got a couch! I LOVE IT! :) It's a gray sectional, just like i wanted. The first pic is the couch, but the second pic is a better visual of the color it is. It's not as dark as it looks in the first pic. We are doing teal accents, though... not red/orange. 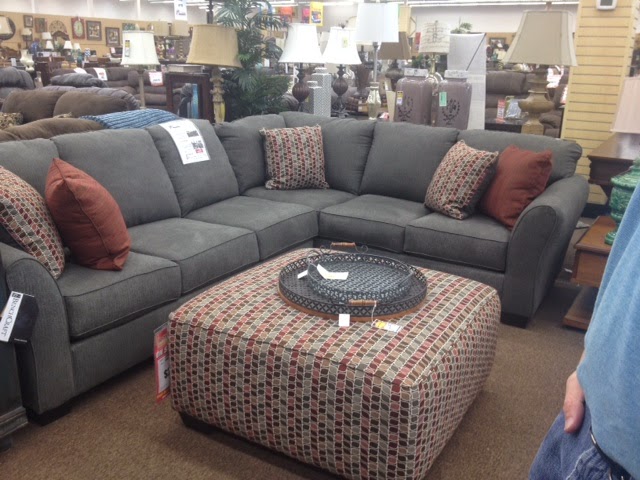 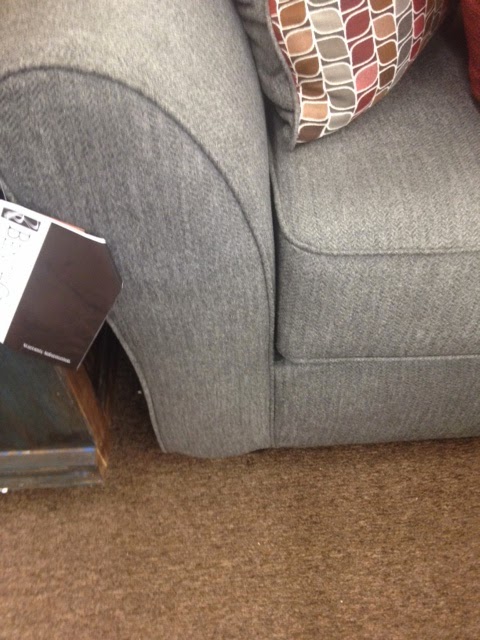 We also got a fridge & ceiling fans... but that is not as exciting, so i didn't photograph them. :)

What else happened last weekend? Well, i had dinner with my friend Tonya... it has been way too long! 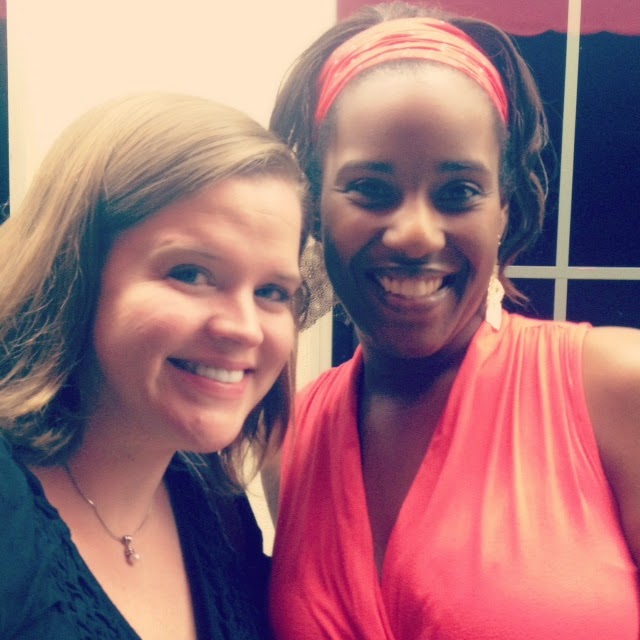 And i went swimming again. Fievel isn't too sure about being in the pool. He was very nervous! He was only a little relieved when i put him on this raft! Haha! He LOVES my parents now fenced-in backyard though. I am thinking he will love the fenced-in yard at his new house even more though - because there will be no pool for people to get him in! ;) 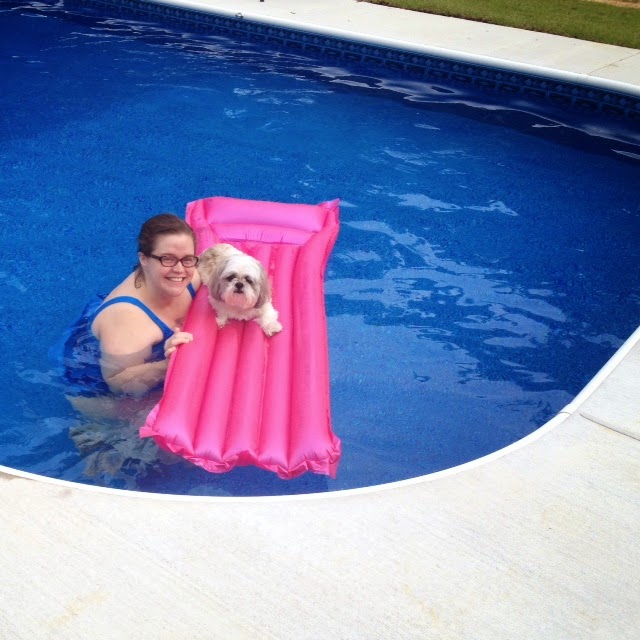 It was an absolutely wonderful weekend. :)

And now we have reached another one. YAY! Tomorrow i will take Fievel to the groomer, go shopping with my mom, and hopefully go swimming again. Rain has been around a lot lately & it is in the forecast all weekend. I hope it stops for a bit, though! I really want to swim as much as possible before it gets too cold to do so! Even though it could be November before that happens! Haha. You just never know!

Well, our house closing got pushed back a week. Instead of being next week, it will be sometime the week of the 15th. WAHHHH!!!!

I know it will be okay. I was kinda bummed but I'll get over it! Haha. It's not the end of the world. Although i don't know if i will ever want to buy a house again! It's just TOO MUCH. I am a planner, and i hate not knowing WHEN something like this is going to happen. I mean, i have to give notice on when to take off work! Now that is being pushed back. Glad my boss seems to understand that that's just the way these things go!

I will have to reschedule our fridge delivery, couch delivery & floor installation. Things like that. But once all that is taken care of, i will feel better.

I am still so excited & ready!

There is so much to do before & after we close that my mind is just kind of swimming with a To Do list! Things like:

-Buy new back door (it is rotted & must be replaced)
-Purchase paint & paint supplies.
-Pick up already purchased flooring & bring to new house.
-Purchase tile from Lowe's.
-Get electricity/water/etc/etc/etc all set up.
-Hire someone to clean the trailer! (I want someone to clean it thoroughly after we move out so the people buying it will have a CLEAN new place! And i don't want to be the one to do it! Ha! I will be too busy at our new house!)
-Call Lowe's & reschedule fridge delivery.
-Call Home Furniture & reschedule couch delivery.
-Call Clay & reschedule flooring installation.

You get the idea. Geez!

In other news, i watched Breaking Amish on Netflix, which was a bit overdone to me & kind of crazy. But then i watched "Amish: Out of Order" & y'all. It's set up more like a documentary & it's very very good. I can't get enough. I love it. These people go through SO MUCH growing up amish. Bad stuff. Their religion is messed up big time. I love some things about how they live, but wow. It's kinda sad. But interesting to watch.

I miss Walking Dead, though. Ha!

In other news, I finished a whole30 & lost 9 pounds. But it's weight I've already lost. I still feel pretty miserable. I haven't been eating that well since it ended, though. Crap. It is frustrating. It is hard. But i am going to keep at it! This picture really resonated with me, though! Ha! This is totally me on whole30. ;) Even though it does feel GREAT to be eating so well... i will always miss crap food apparently. I don't know why that is. 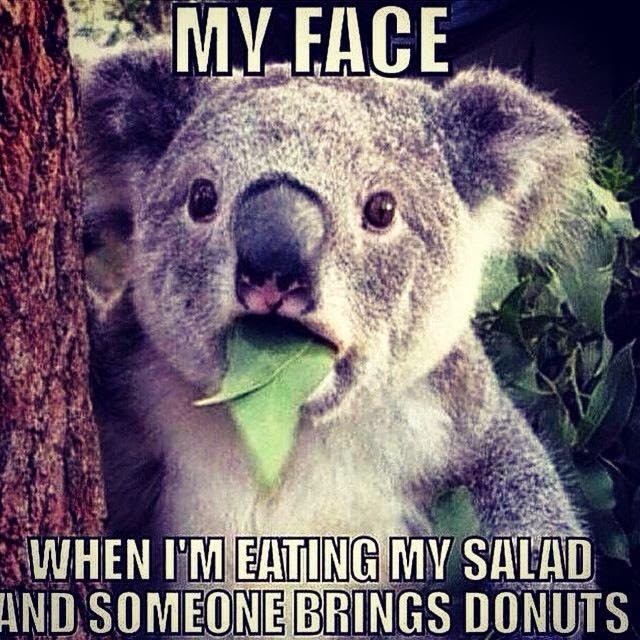 I will say i had a Pumpkin Spice Latte after whole30 & I didn't like it. Too sweet. I used to LOVE those things! This rarely happens though. Everything else is still wonderful. It's a shame. I haven't tasted coke since, though. I'm just not willing to do that. I can't. I am SOOO addicted to that stuff. So at least i've kept that out of my life! But i could stand to do another whole30.I really want the paleo lifestyle (or primal, because it allows dairy) to be just the way i live. I don't want it to be something i constantly have to work so hard it. I guess it would just be nice if it became second nature. Is that too much to ask?!

Haha. I just re-read that last paragraph. I mean, COCA-COLA, people! Not cocaine. Just... wanted to clear that up. Since i know you probably weren't sure! ;) (Ha - right!)

Hope you have a great weekend! :)
Posted by Melissa at 10:51 PM
Email ThisBlogThis!Share to TwitterShare to FacebookShare to Pinterest
Labels: new house, shopping, TV