We have a house!!

Yesterday we carpooled to work. Brad got off at 11:30, and picked me up at 11:45. We headed to the office where we were to have our house closing. We were super early. We sat in the car and took selfies & talked excitedly &, well, yeah. There may have been a little anxiety. 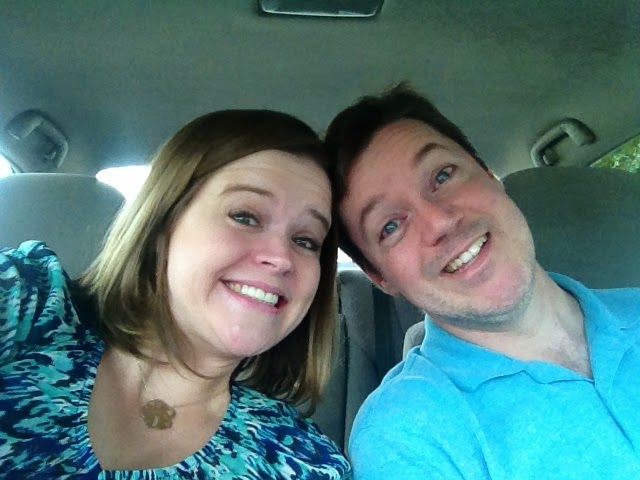 Our appointment was at 1:00, so around 12:50 we finally walked in. We didn't want to be TOO early. ;) The receptionist got our licenses & other info to make copies. We sat on a comfy couch & i looked at a magazine. Our realtor, Lisa, and our mortgage broker, Erica, arrived. We chatted with them. Then, the lawyer, Billy, called us to a room with big table and a huge stack of papers.

You didn't really need the play by play, did you? :)

It wasn't bad! We had fun! I understood everything the lawyer explained! (That should be a given, but I assumed that wouldn't be the case. I assumed i would just sign while my brain was in a fog...this is what usually happens when people start talking numbers/business/contracts/etc. I figured i would nod & sign, and let Brad handle the actual understanding part. This wasn't the case, though. It was easy peasy! Haha!)

Halfway through, the lawyer's secretary came in and handed him keys. He handed them to us. We were like, KEYS! YAY! He said, 'You still gotta sign the papers, though.' LOL. 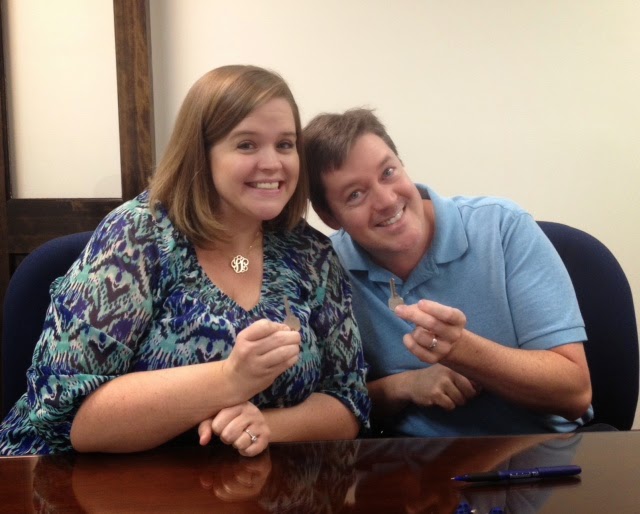 Erica, Lisa & Billy have met together many many times, so they know each other very well. They were cracking jokes the whole time, which made it a lot of fun & relaxing. They're all pretty awesome! 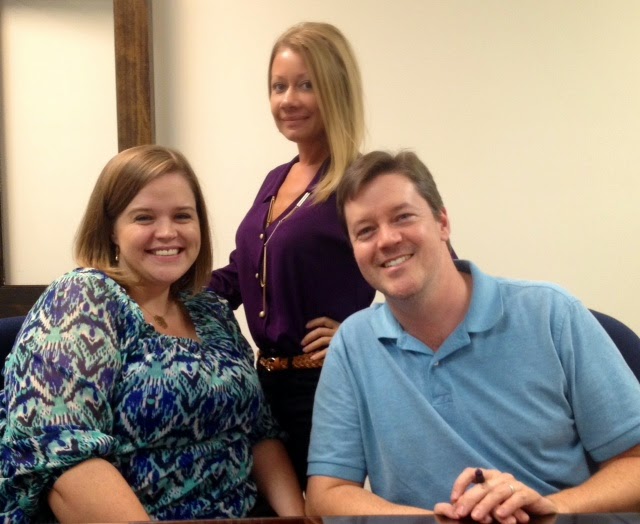 with Lisa, our realtor. i have known her since kindergarten!

Erica & Lisa each brought us a housewarming gift! How sweet is that?! Lisa gave us my first Scentsy... and it's gray, which is the main color in our new house! And Erica gave us some cute dish towels. Love both gifts! (Yeah, i know I said in my last post we are totally NOT LSU fans, but that's because of our lack of love for sports. I love the dish towels, though, because LSU & the fleur de lis SCREAMS Louisiana. And I'm a total fan of Louisiana, even if i do complain way too much about the traffic. :) 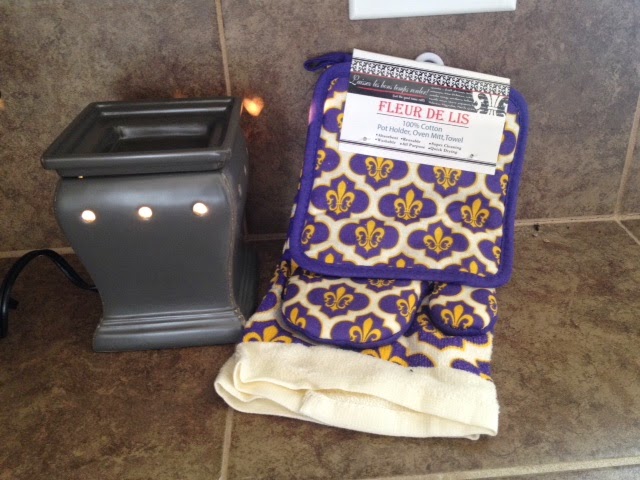 We left, and headed straight to the new house, of course. Our parents were both sitting on go to come help with some stuff. The plan was to paint Saturday & Sunday but my parents wanted to go ahead & get started! And Brad's dad had a ton of stuff to drop off that he & Brad had picked up the night before at Home Depot. Plus, Jaimie (my sister-in-law) had her guys at her work deliver our new flooring for us, and they had just arrived. It was under the carport and needed to be brought in. MAN, that flooring was HEAVY. I think I carried two of them. Then my dad got smart & opened the window to the bedroom we were leaving them in & handed them through it to Brad. Putting the screen back on after bringing all the flooring in!

My mother-in-law and mom came. They both brought a few necessities that I never would've thought of. You know, hand soap, a towel, paper towels. They BOTH brought toilet paper! Hahaha. Good thinking!! My mom brought that flag she had bought me off etsy. I put it out front immediately! 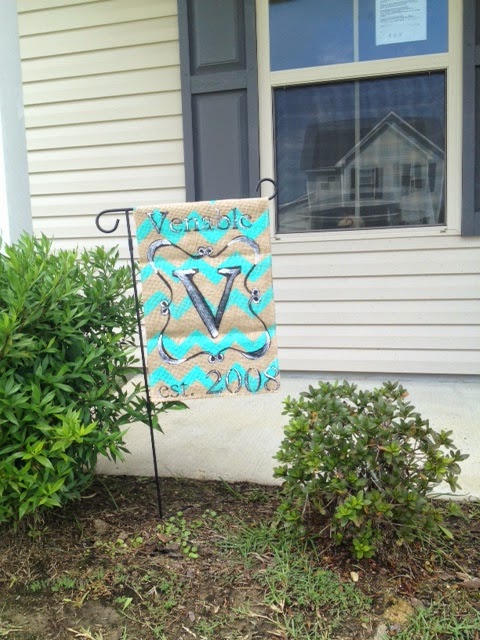 We needed a trash can & a broom desperately, so my MIL went to pick those up. Mr. Stan, my FIL, changed out our locks for us. My dad & Brad finished bringing in all the new flooring, and FINALLY we could leave to go eat lunch! Y'all. I know, i know. How could i be hungry at a time like this? Well, remember, we left work at 11:45, and i hadn't had lunch. We went straight to the title place and were too excited to eat. We decided to have lunch right after. But then we wanted to go to the house first and ended up having work to do! So at this point it was almost 4, and we were STARVING!!!! Ha! Everyone else had eaten. So Brad & I left and went to Rotolos. :)

We finally went home and did some PACKING! Ugh. Packing is my second most hated thing to do in the entire world (first being sitting in traffic... i did a lot of that this week!).

So today, we paint. All day long. And tomorrow we probably paint too. I doubt we will finish today. Monday we get floors put in. Tuesday, we MOVE!!!!!! YAY!

I'm so excited. So happy about our new neighborhood, our new area of town, our new house. GOODBYE BAKER! GOODBYE TRAILER PARK! GOODBYE TRAILER! (i have to say, i am most excited to just get out of Baker & the trailer park. The trailer would've been okay on some land. I just hate this area. Not to say that i wouldn't prefer my new house, because i so totally would and do! I LOVE IT! :) It's small, but adorable & we love it! 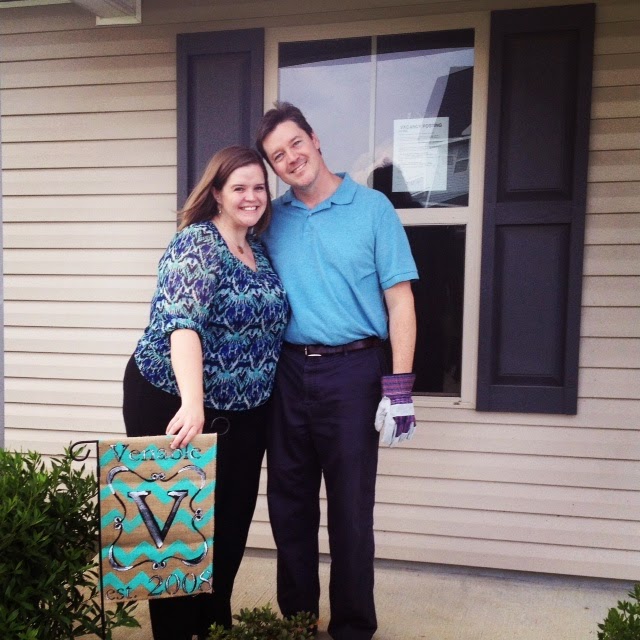 Nice work glove on his hand, huh? HAHAHA! Yeah, i may or may not have interrupted him from his hard work to take a picture. :)

P.S. I posted this picture on facebook, and had THREE people i know ask where it was...they both said, "it looks like ---" & named my neighborhood! Turns out two people i know live in the same neighborhood and another one lives right near our neighborhood. Plus, I had already found out a girl i know about my age lives on my street! Cool! Yay for good neighbors already! :)