Every year I make New Year's Resolutions. Maybe it is strange, but it is one of my favorite things about a new year. I like to set goals. And i know you can do that any time of the year, but something about a new year just really makes me want to focus on change. Doing things better. Making this one count. So every year, I list several resolutions. Some I stick with, some I don't. I don't really beat myself up if i don't succeed. But i do put it out there and try to achieve it. You know...at least through March. ;)

This year I didn't do that. It's the first year that i can remember NOT making new year's resolutions. I mean, I usually have them in my head before the first of the year, and i usually have them written in a blog post within the first week. But this year? Nothing. I haven't really given it much thought. At all. Of course, I probably will at some point. I do want to set my own personal goals for 2015, and I do want to write them down. But this year things are a little different. This year, it's not about my resolutions. It's about a single word.

Have you seen how some people have a word for the year? Like... someone's word may be "peace" or "trust" or "faith". You get the idea. I've never done this. I have never thought it was dumb or a bad idea or anything like that, it's just something I'd never heard of doing. And then when i started seeing people proclaim their word of the year, I thought it was cool but I didn't plan on having a word for myself. It didn't even occur to me. I'm a resolutions girl.

Until this year. God gave me a word. I wasn't looking for one. But suddenly this word became something I really want to focus on this year. And that word is, 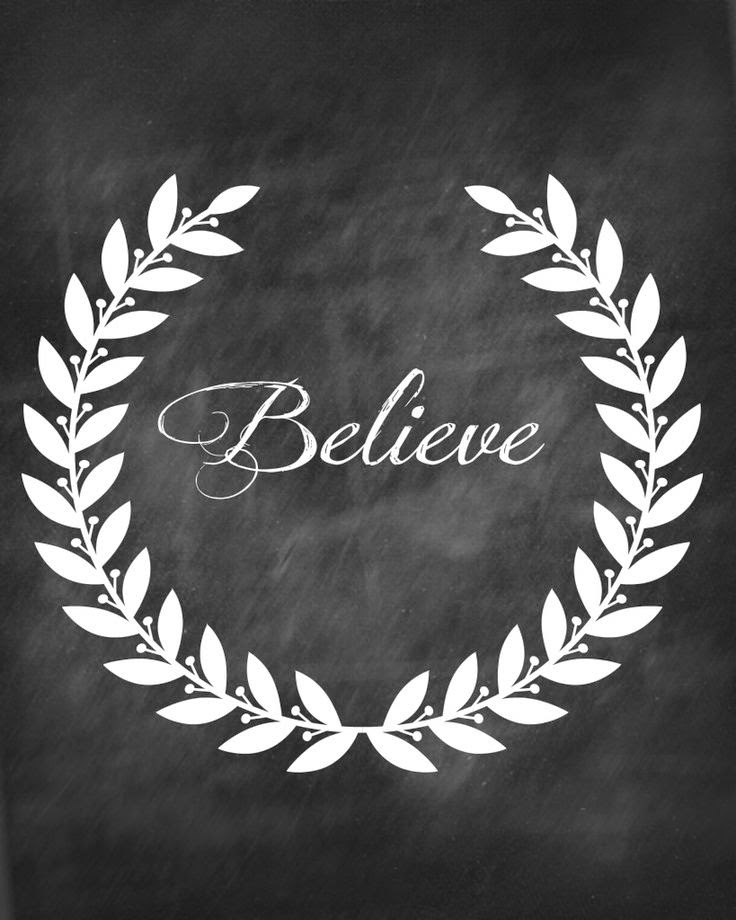 It all started in early December. I was in a gift shop looking for something to give a friend. Then i found this, 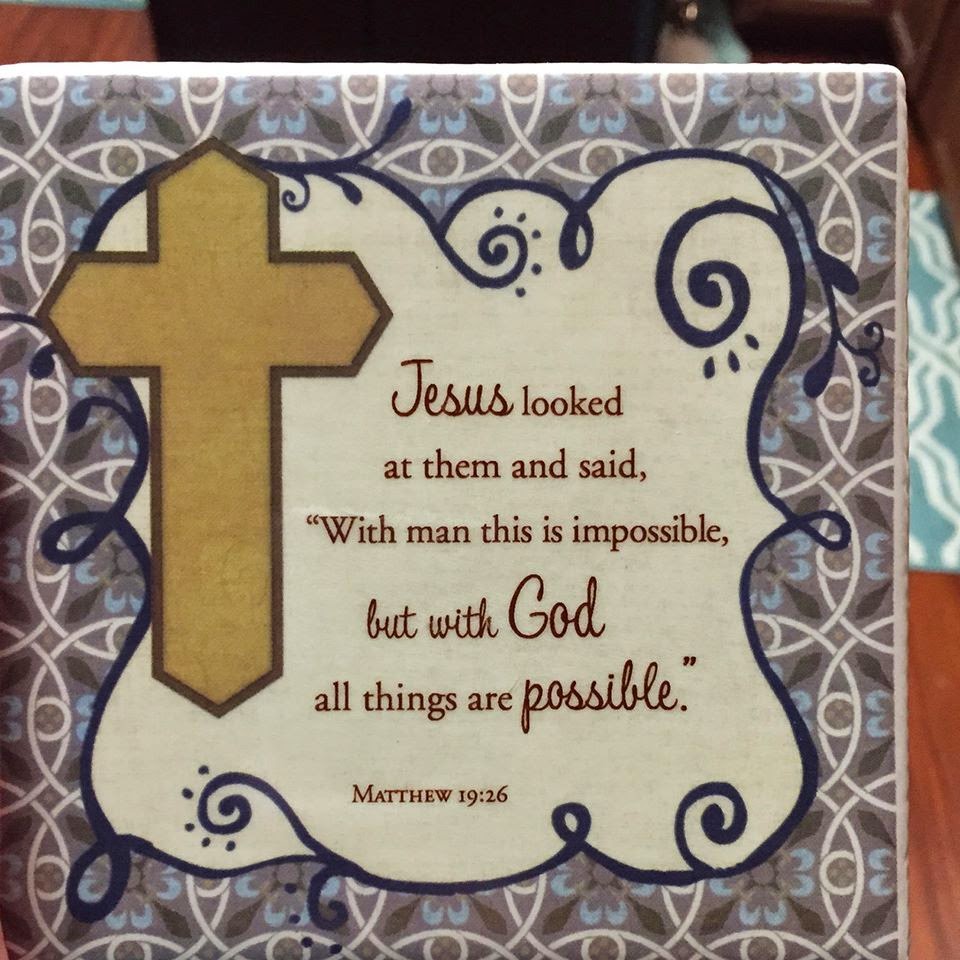 And i had to have it. I wanted it in my house, where i could see it and read it and let its words sink into my heart. I've known this verse, and others like it, my whole life. Believing those words has never been a struggle. But after years of infertility, and then a pregnancy that ended in miscarriage... well, let me be honest and say that believing God was no longer so easy. I felt betrayed. I felt hurt. I felt many other things, and I don't even know if I realized at the time that I was blaming God. But i was. (It's okay to admit that... He knows anyway and He loves me anyway.)

Once my anger had dissipated, I still felt really hurt. Hurt by God? Yes. I felt that He had let me down. Big time. Certain things about the miscarriage felt cruel to me. The biggest one being that this pregnancy came after three years of infertility. Because of that, it felt like a HUGE answer to prayer! And then I lost the baby. So basically He answered my prayer, i was elated, i was overjoyed, i praised and thanked Him for this gift. And then it was over. He received all praise for the miracle, and in my mind, he got the blame for taking it away. I do not mind being transparent with you; this is how i felt. I'm not saying it was the "right" way to feel, but it's how i felt in my grief. I do not feel that way anymore. But at the time, i had to blame someone, and there was really no one for me to blame but God. He is the only one who could have prevented it, but He didn't. How could I trust Him again?

It has been almost a year since my miscarriage, and I am not fully emotionally healed. I don't know if i ever will be, especially if we are never able to conceive (or adopt). But i am closer to Jesus than I was before I miscarried. He's shown me over and over throughout my life just how good He is. He allowed my pregnancy to end, and I don't know why. But I still will believe Him. I have no trouble believing He is God, that His word is truth, and that He loves me. But i need to believe Him on a deeper level. I feel like my faith was shattered in 2014. Not faith in God, but faith in His promises. Promises like,

"For most certainly I tell you, whoever may tell this mountain "be taken up and cast into the sea", and doesn't doubt in his heart, but believes what he says is happening, he shall have whatever he says." -Mark 11:23

"Therefore I tell you, whatever you pray and ask for, believe that you have received them and you shall have them." -Mark 11:24

"Blessed is she who believed, for there will be a fulfillment of the things which have been spoken to her from the Lord." -Luke 1:45

I have said this a few times. Early in my journey of infertility, i heard a speaker (I think Christine Caine) say that in our suffering we have a choice. We can run TO God, or FROM Him. One or the other. You may be able to just exist for a little while, but at some point you are either heading towards Him or not. I determined then that I would not allow this to bring me away from God. I would run TO Him. I know that I've struggled with believing Him this past year, but before that, and before infertility, I didn't. I have walked many years with Jesus by my side, relying on Him, trusting Him, seeking Him. I KNOW that He is faithful. I KNOW that He is good. He is the one who turned my sorrows into joy, more than once, and He has whispered to me that He will do it again. So this post is not coming to you from someone who has never really fully believed. I used to have no trouble believing God. Not because someone taught me to believe Him, but because i experienced His love and compassion and goodness for myself. Infertility & miscarriage has changed my perspective. But it hasn't changed God, or who He is. And that brings me a lot of comfort. He hasn't changed. He's got this. And he still loves me even more than i can comprehend, despite my lack of belief and trust. Despite my anger and jealousy. Despite my fear and doubt. He loves me, and even rejoices over me (Zephaniah 3:17).

So there you go. My word is BELIEVE. This year is about believing God. Trusting Him. Becoming a woman of faith again. I've been listening to this song all day. A friend from my support group shared it with me and i can't stop listening. I especially love the part where John Piper speaks. In case you can't listen right now, I'll post what he says during the song below. It's powerful.


"Not only is all your affliction momentary, not only is all your affliction light, in comparison to eternity and the glory there, but all of it is TOTALLY meaningful. Every millisecond of your pain from the fallen nature or fallen man, every millisecond of your misery in the path of obedience is producing a peculiar glory you will get because of that! I don't care if it was cancer or criticism. I don't care if it was slander or sickness. It wasn't meaningless. It's doing something, it's not meaningless! Of course you can't see what He's doing. Don't look to what is seen. When your mom dies or your kid dies, when you've got cancer at 40, when a car careens into the sidewalk and takes her out, don't say "It's meaningless!" - it's NOT! It's working in you an eternal weight of glory. Therefore...THEREFORE...do not lose heart. But take these truths and day by day focus on them. Preach them to yourself every morning. Get alone with God and preach His word into your mind until your heart sings with confidence that you are new and cared for." -John Piper