Ok, so I wanted to give you a little idea of what I eat when I'm on whole30 & what I plan on continuing to eat even after it is technically over. I also wanted to share some recipes with you. So, here we go! :)


{Breakfast}﻿
I can't think of anything better for you for breakfast than eggs. Eggs, eggs, eggs. They are good for you! I know back in the day there was all this worry about them being too high in cholesterol... but do some research, because that isn't really a concern anymore. In fact, my cholesterol has never been high (even before my first whole30) and it didn't get worse afterwards (when I had been eating eggs practically every weekday). 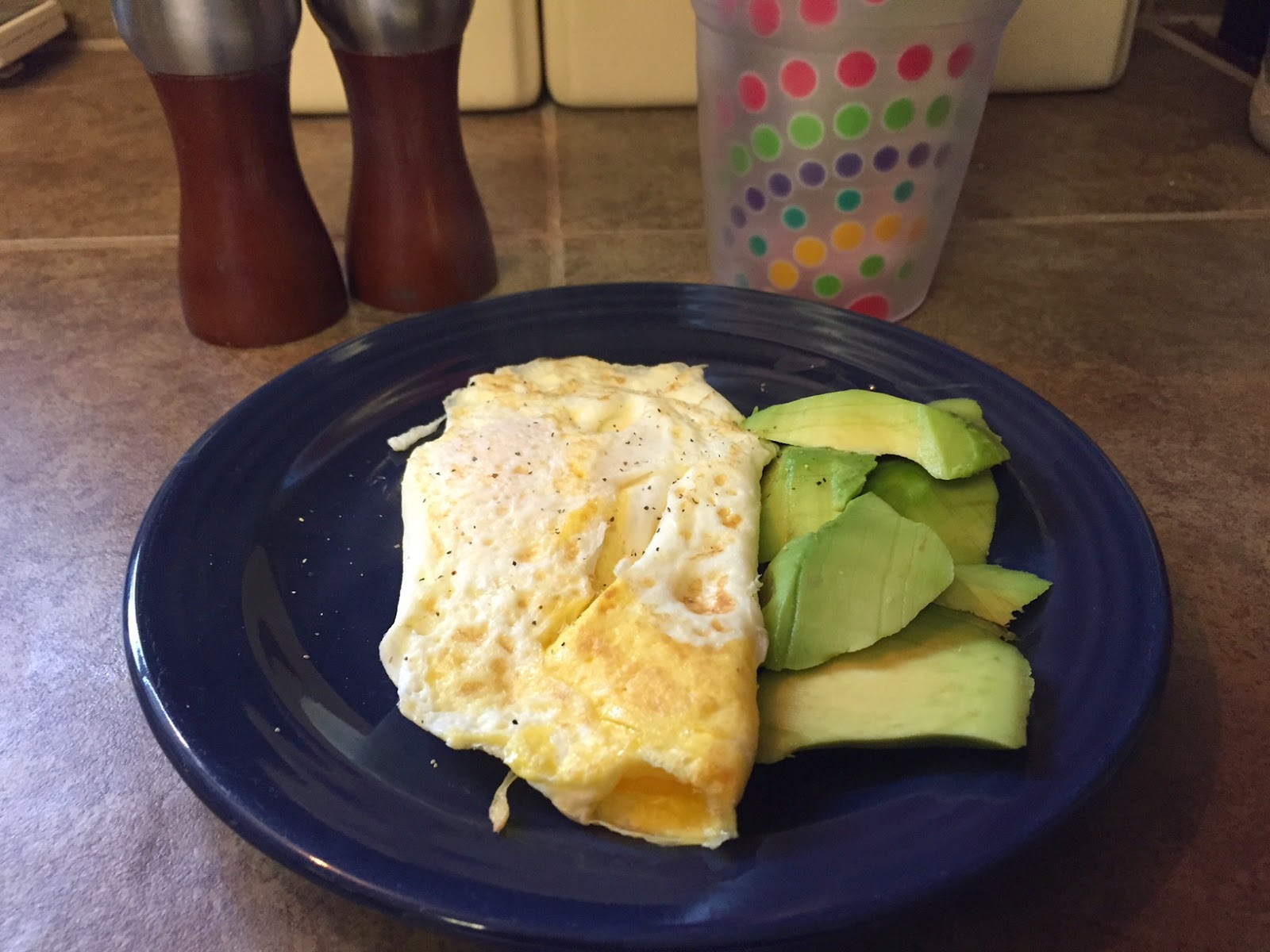 They are sooo good with avocado! ﻿

I am going to be honest with you and tell you that while i think eggs are the best thing for breakfast, usually after a few days of them, I want to gag just thinking about them. I'm not sure why that is. On those days I've had either a lara bar, some chicken with avocado (who says breakfast has to be a traditional breakfast food?!), or nothing. Out of these, I would say chicken is the best idea, and a lara bar second best. NOTHING shouldn't be an option if you're trying to eat healthy. You need a healthy breakfast! 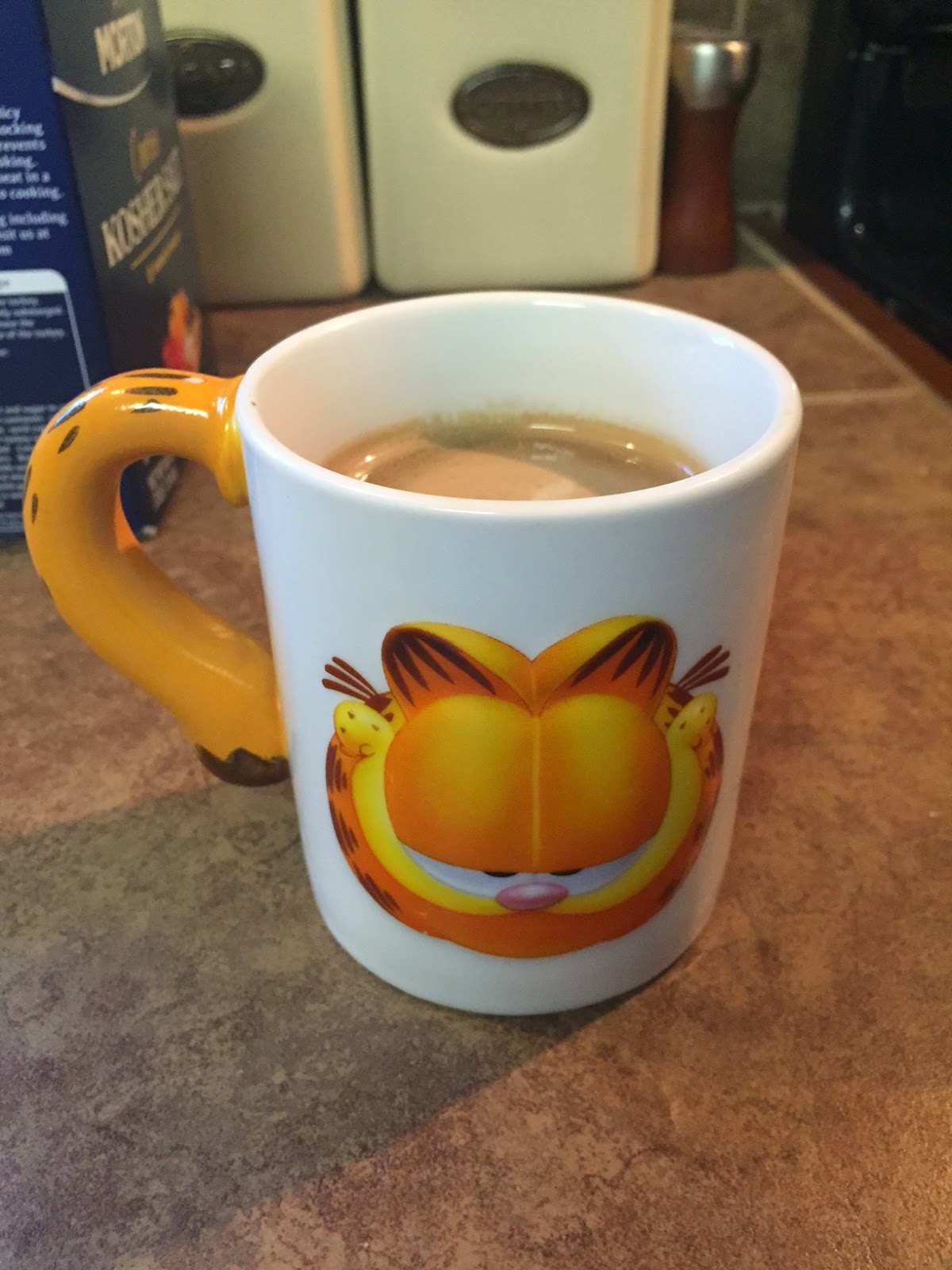 Definitely some coffee with coconut milk. In a Garfield mug, preferably. :)

Last whole30 I had smoothies a lot for breakfast because they're great for me on the go. A lot of people will tell you they aren't legal on whole30, but they ARE! They're not recommended, but they are not against the rules. The reason they aren't recommended is because it's like dessert for a lot of people, and possibly a trigger for cheating later on. This isn't the case for me. It's just a convenient way to have breakfast on the go! I haven't had a smoothie this time around, though.

My FAVORITE breakfast is what is called monkey breakfast, or maybe you can call it monkey cereal. I LOVE this because it's got the crunchiness of cereal. In fact, i don't think i'll ever have cereal again! Put in a bowl sliced up banana, a sprinkle of cinnamon, coconut flakes, pecans or cashews and coconut milk. To say it is good is an UNDERSTATEMENT! I have insulin resistance, so I should probably limit bananas. Because of that, I don't think it would be good to have this every single day! But a couple times a week wouldn't hurt! :) 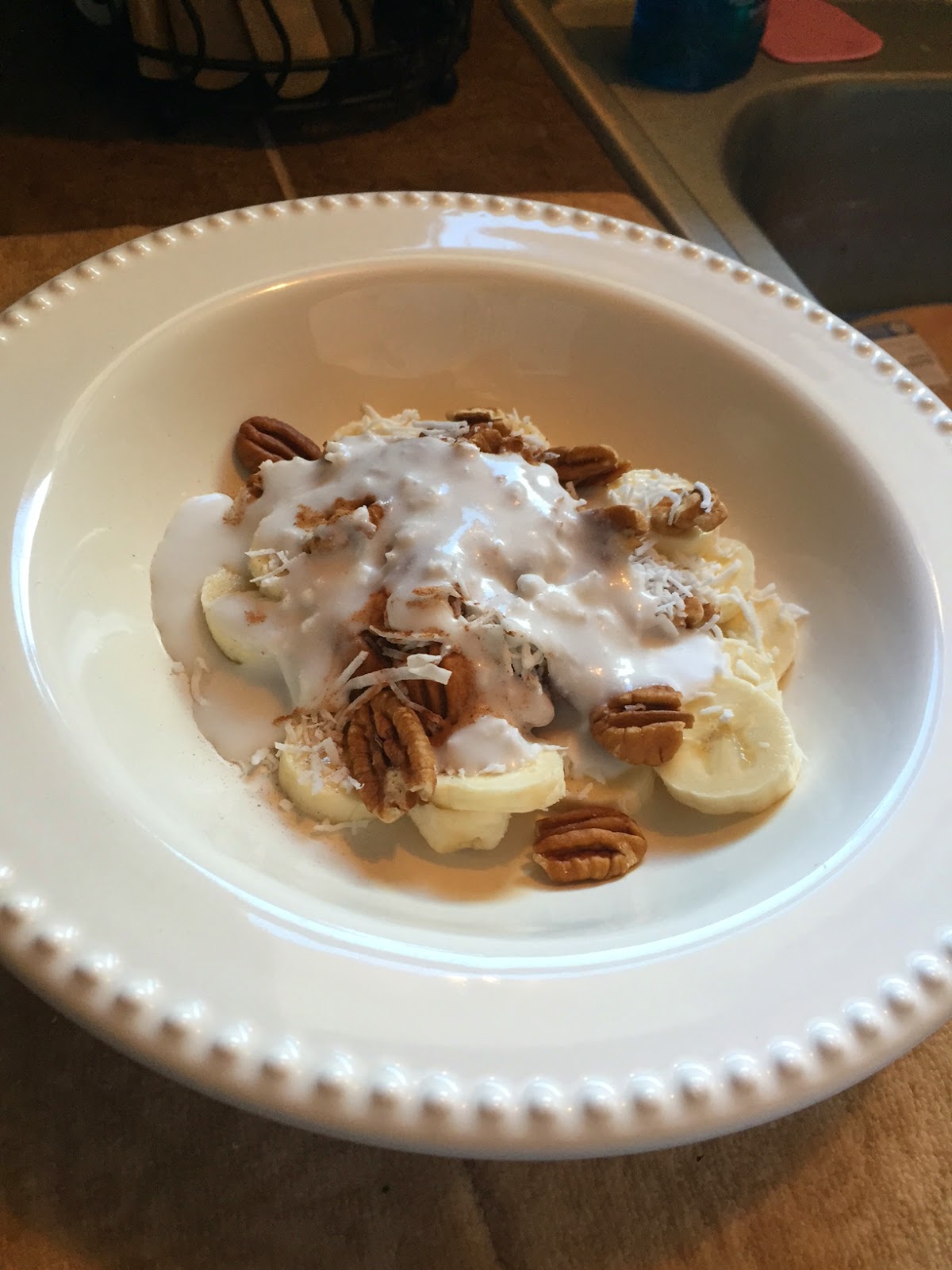 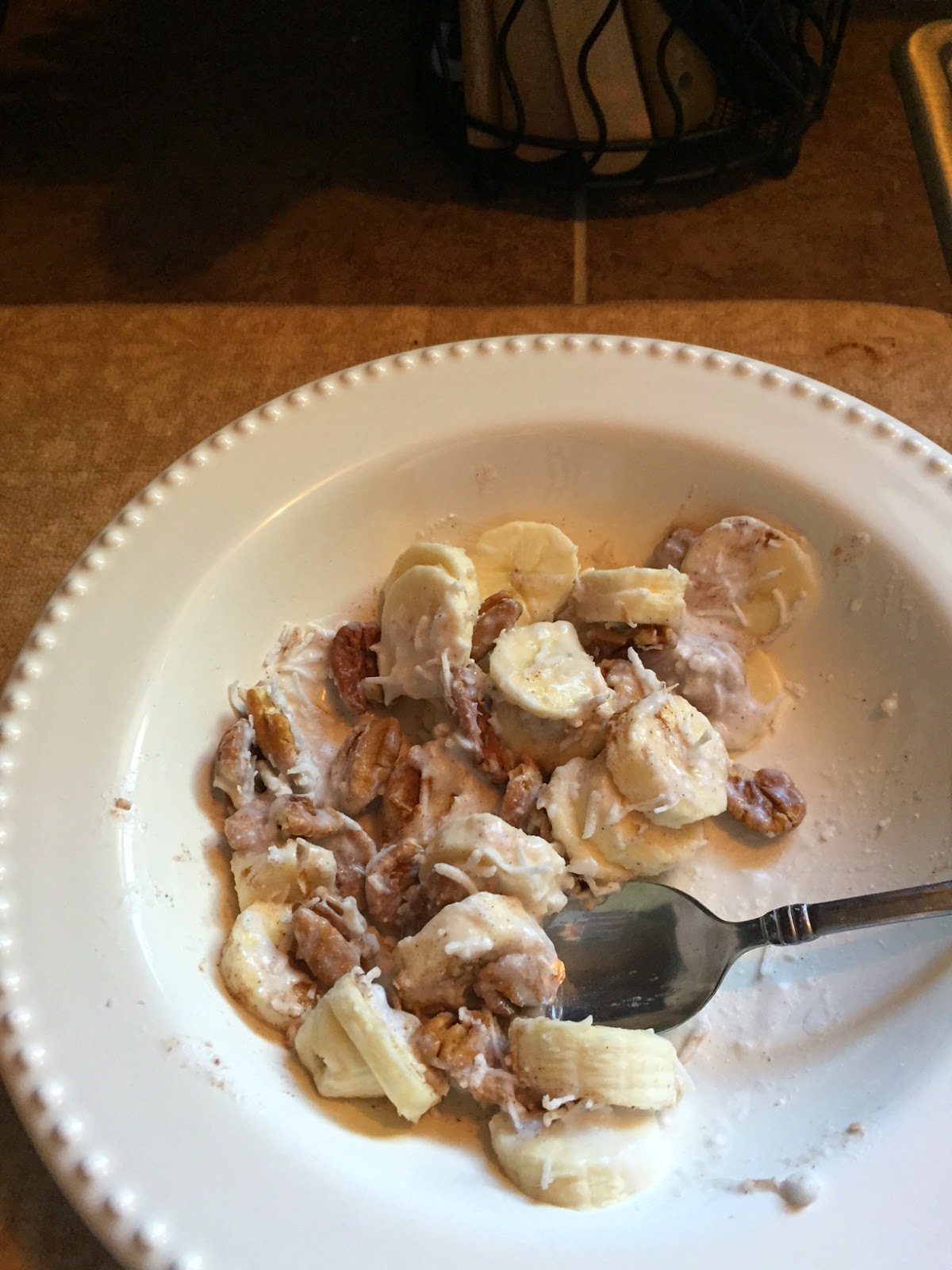 
{LUNCH}
My lunches aren't too exciting because I just have to pack something to take to work. It's usually leftovers from dinner, or baked chicken with veggies. Here are three examples of lunch.

Lunch at work that I brought from home (usually something like this or leftovers from dinner): 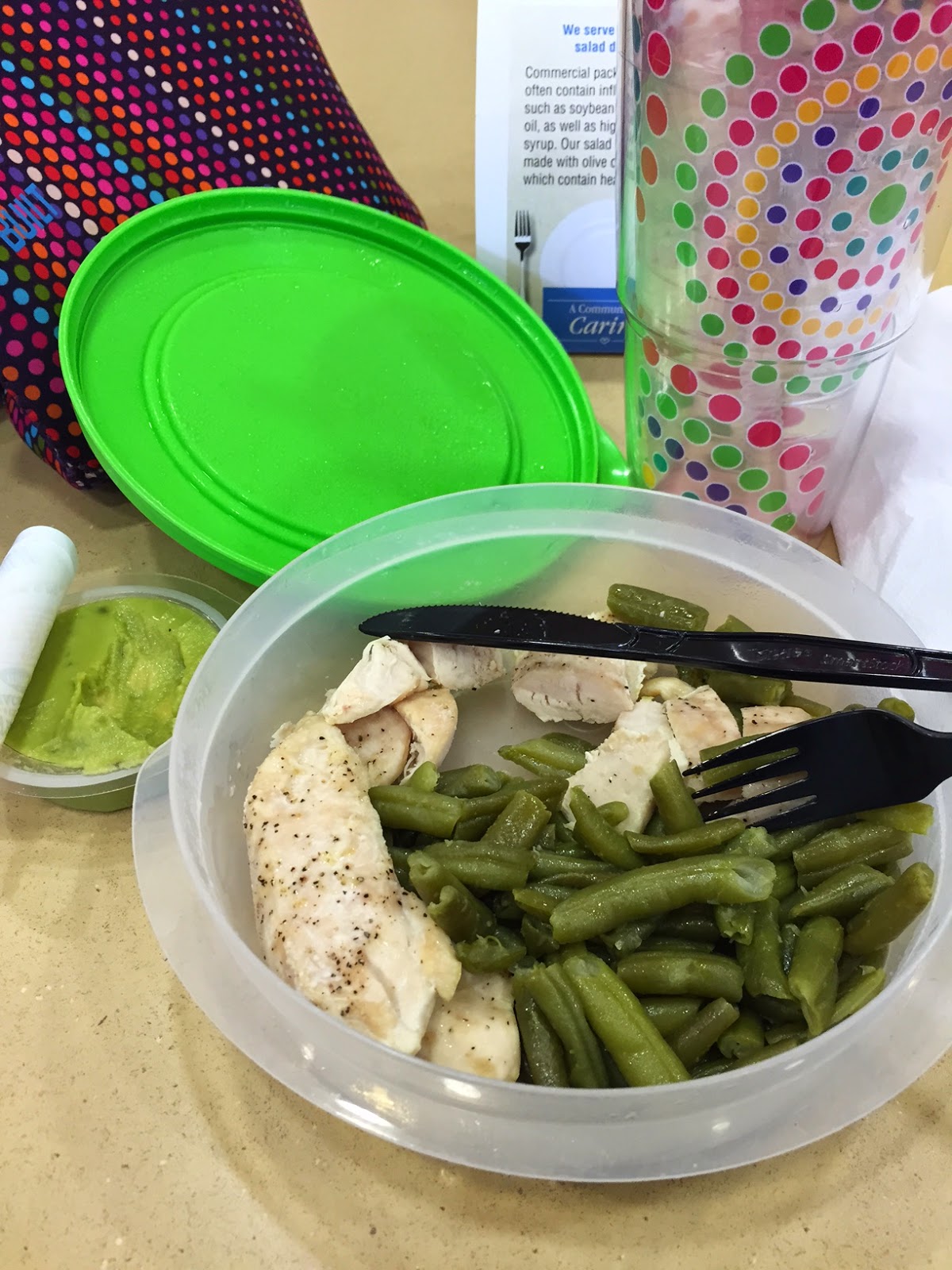 Lunch at work that I got at work (this is if i just couldn't get it together and bring something! Thankfully my work has a salad bar!): 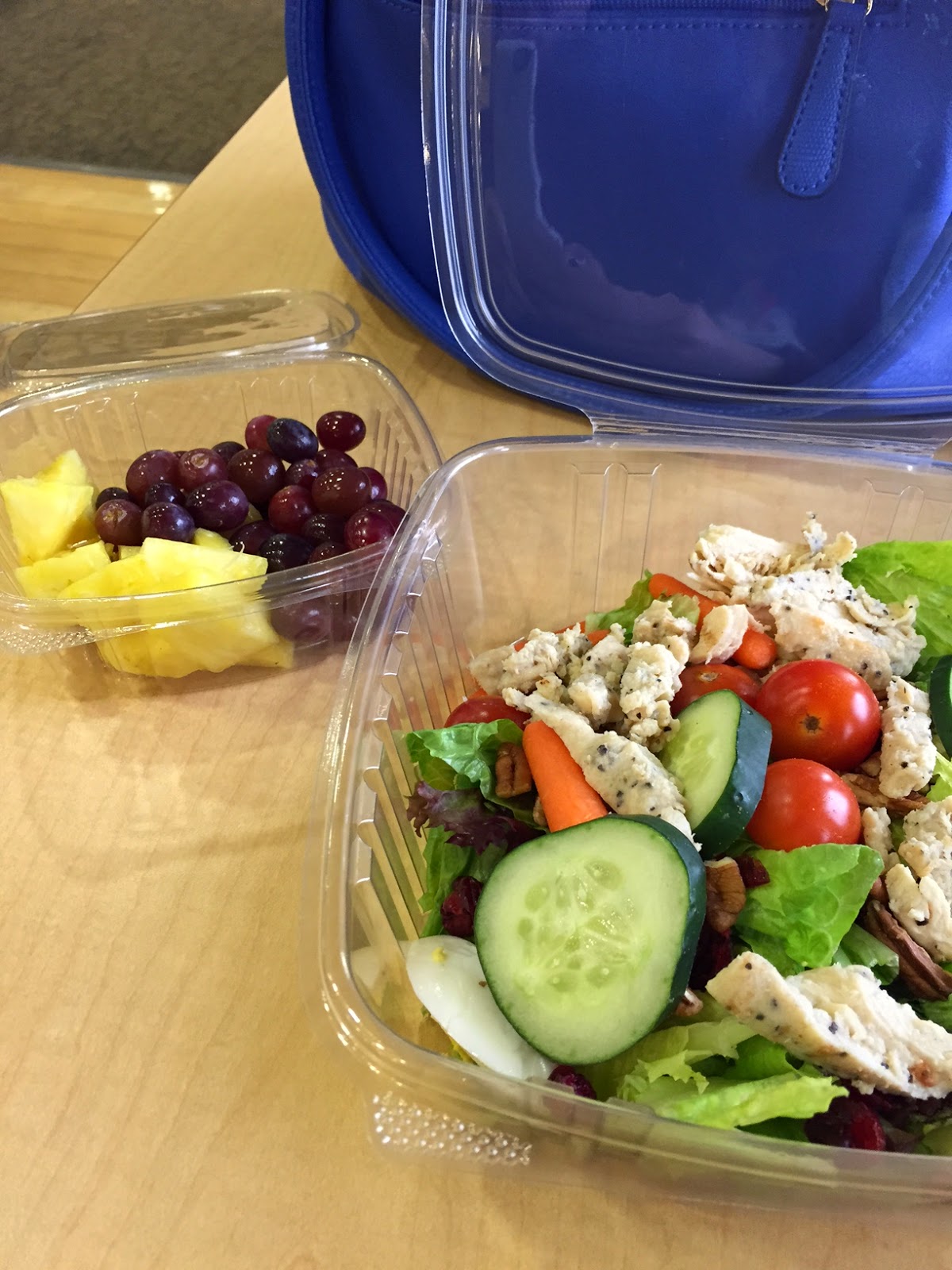 Lunch at home on a weekend: 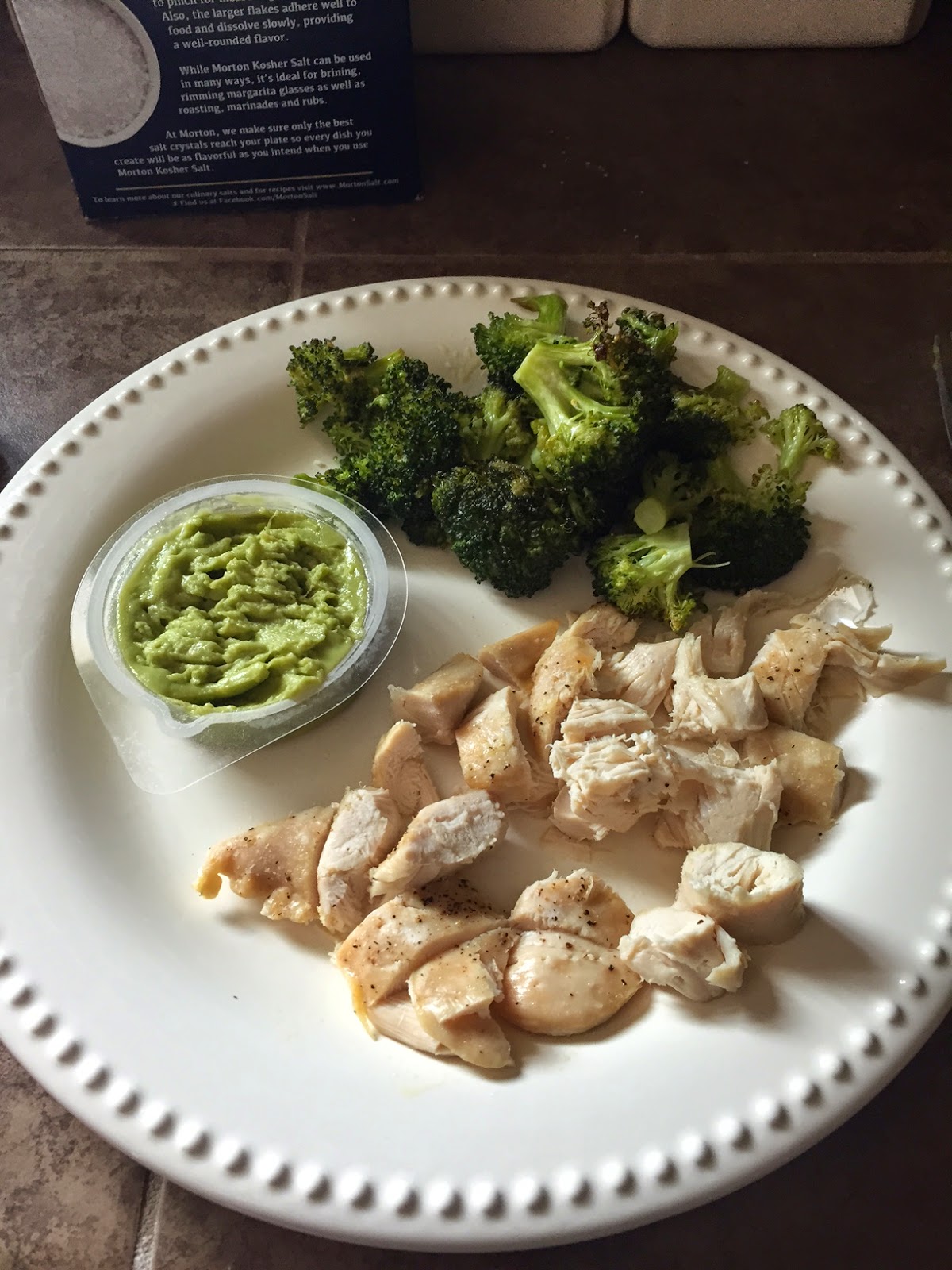 The little single serving of green stuff is wholly guacamole. So good! I could probably dip anything in it and be happy.


{DINNER}
Here's where you get to see some new recipes and all the fun things I've been trying! I am also learning to meal plan. This is new to me, I never could get the hang of it! I still don't have the hang of it, but I'm making progress. When I planned the first week, I wrote down the meal and ingredients in my planner. That way next time I'm ready to meal plan, I'll have a bunch of recipes and the shopping lists already ready! 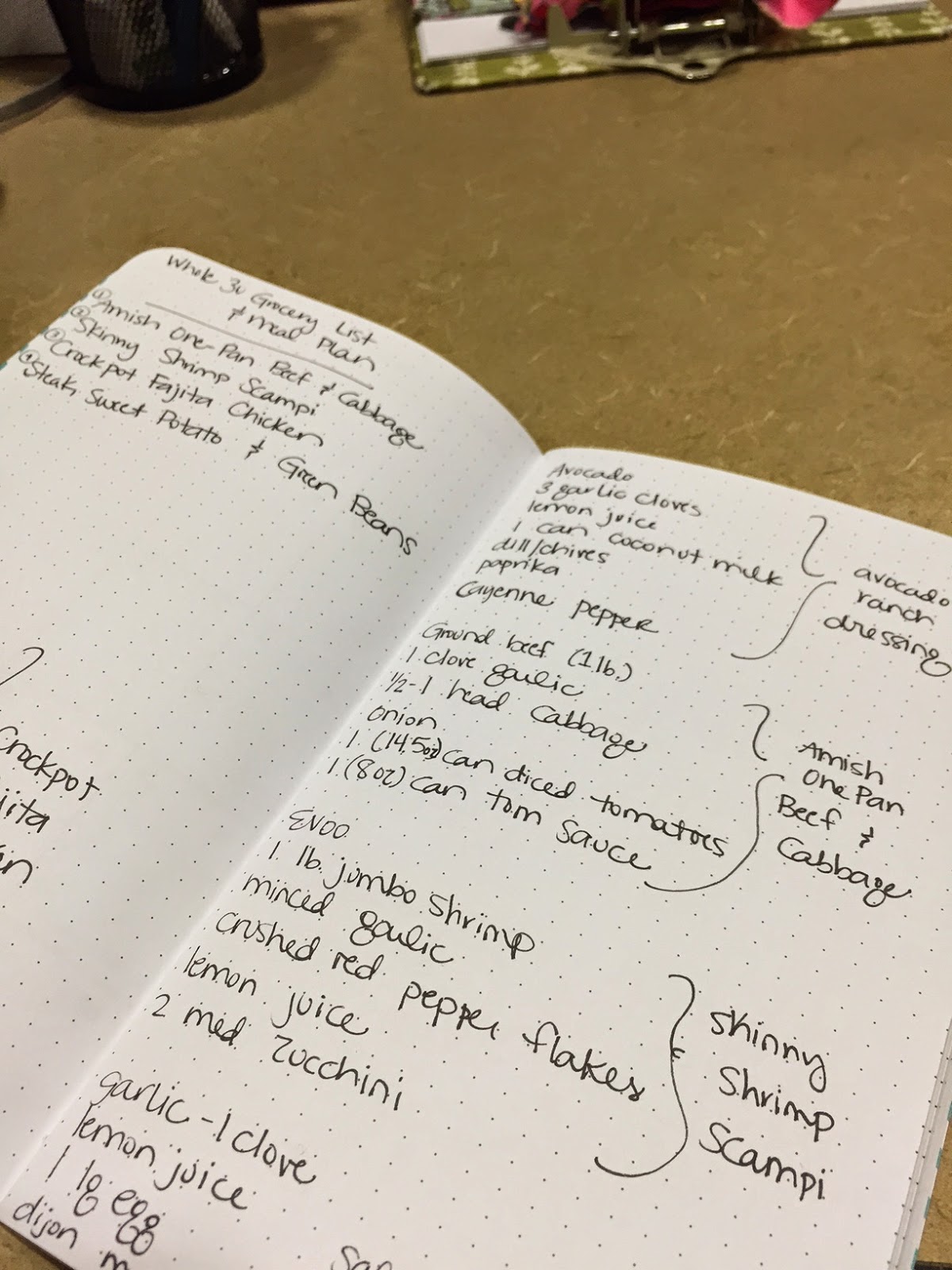 I've also been writing down everything we have been eating for dinner on a weekly planner, to help me as i meal plan in the future.

Here are some of the things we have tried. (P.S. Their pics are better than mine, so click the link for a better picture - or a recipe!) 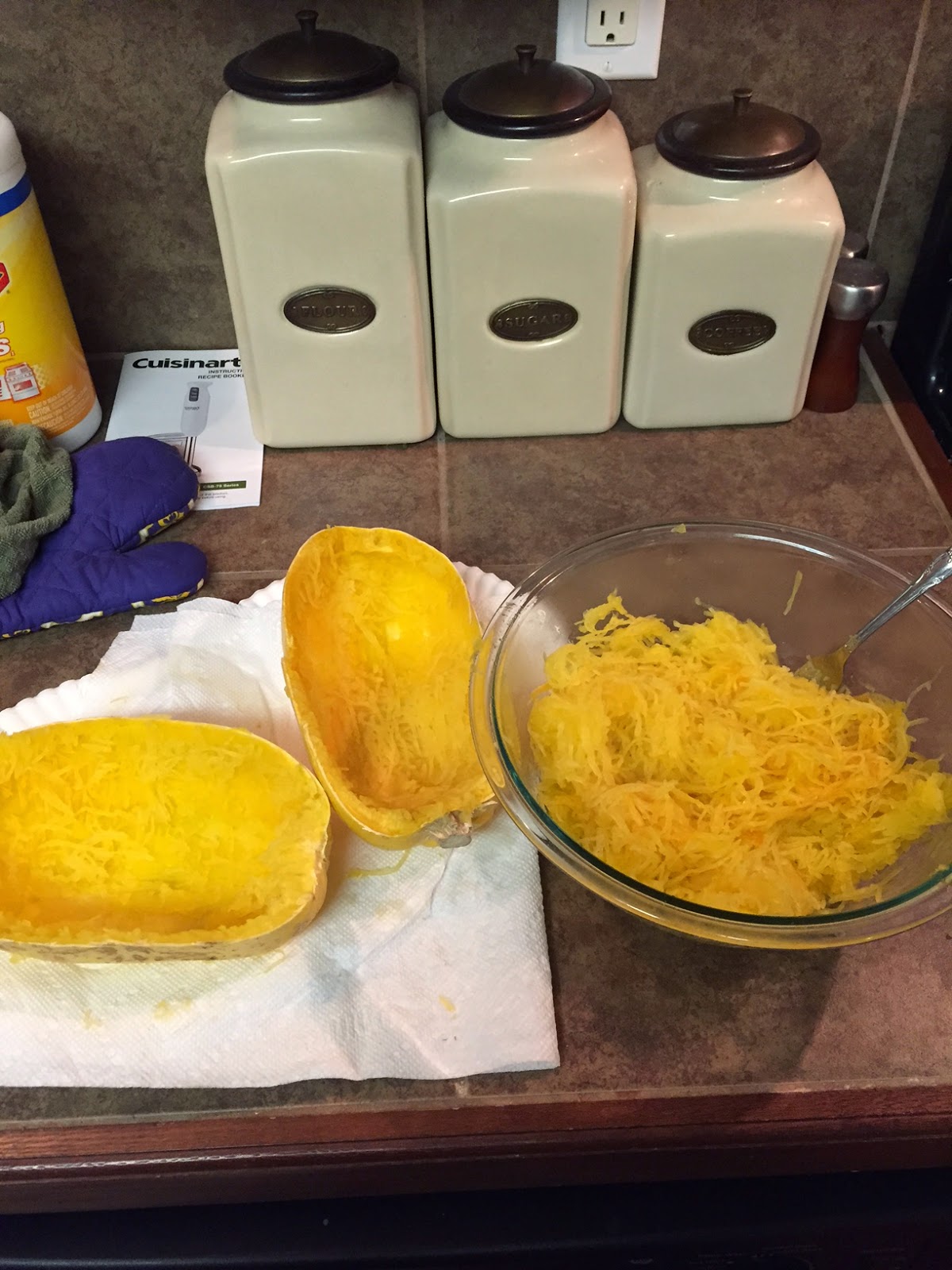 I was pretty proud of myself, although I did have to get help from my husband!
That thing is hard to cut open! 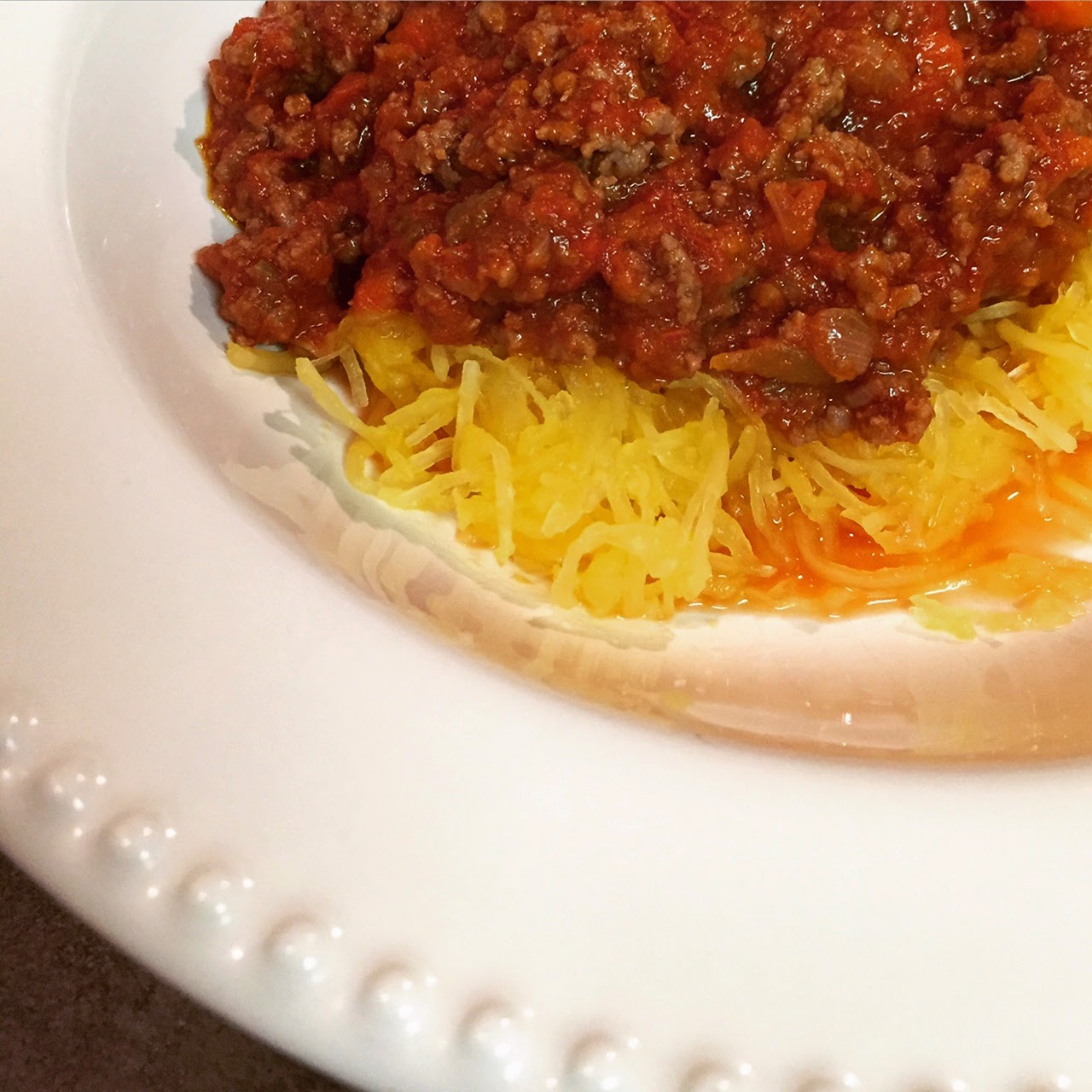 To say this was good would be an understatement. It was FANTASTIC. 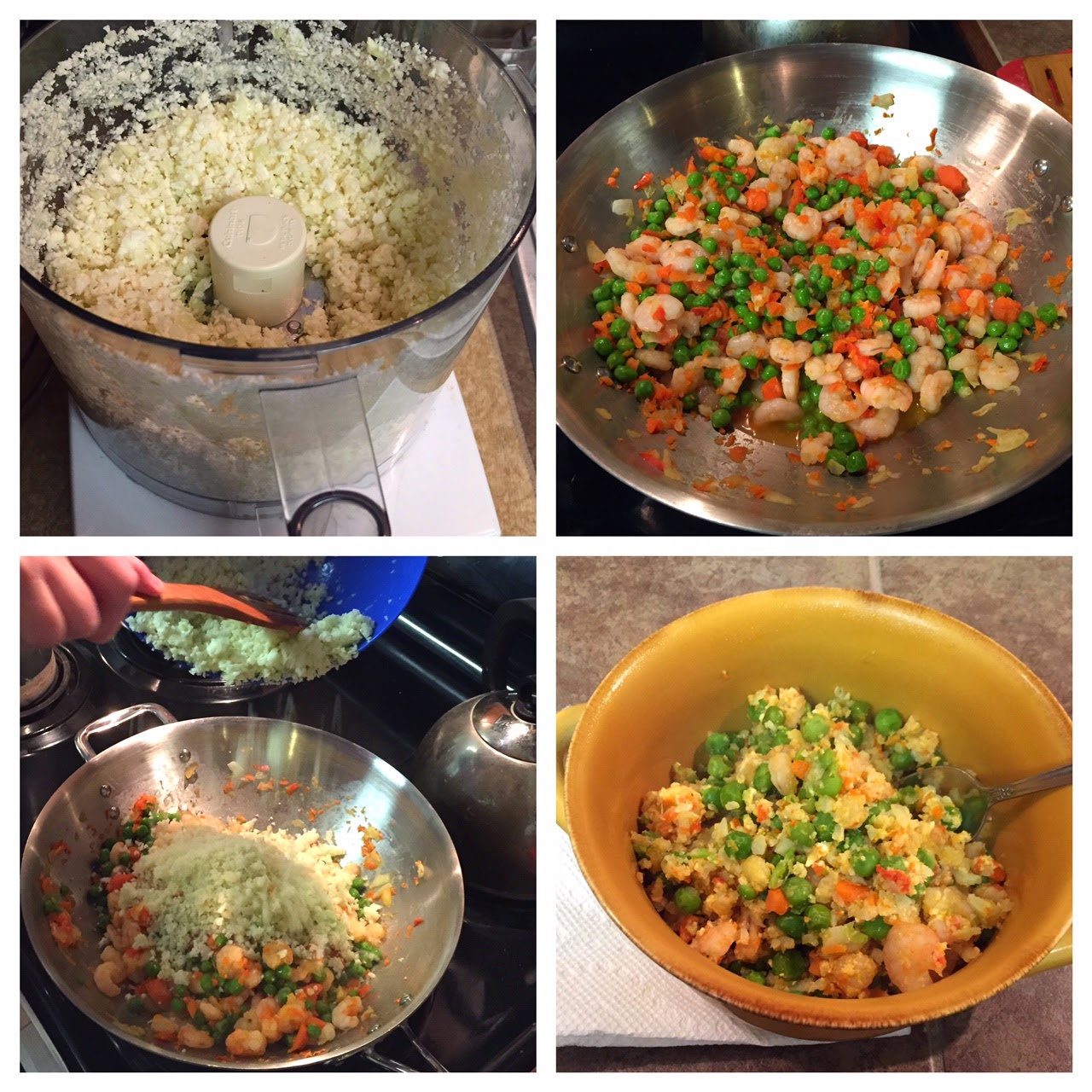 The top picture on the left is cauliflower rice - delicious and easy to make! A note about this recipe - I had forgotten and didn't realize until it was finished (& consumed!) that peas are off limits for whole30 (unless it's snap peas). Oops. So leave them out if you're on whole30. This meal was SO DELICIOUS! I told Brad i couldn't believe it didn't have a soy sauce or something. It didn't, but it is just bursting with flavor! 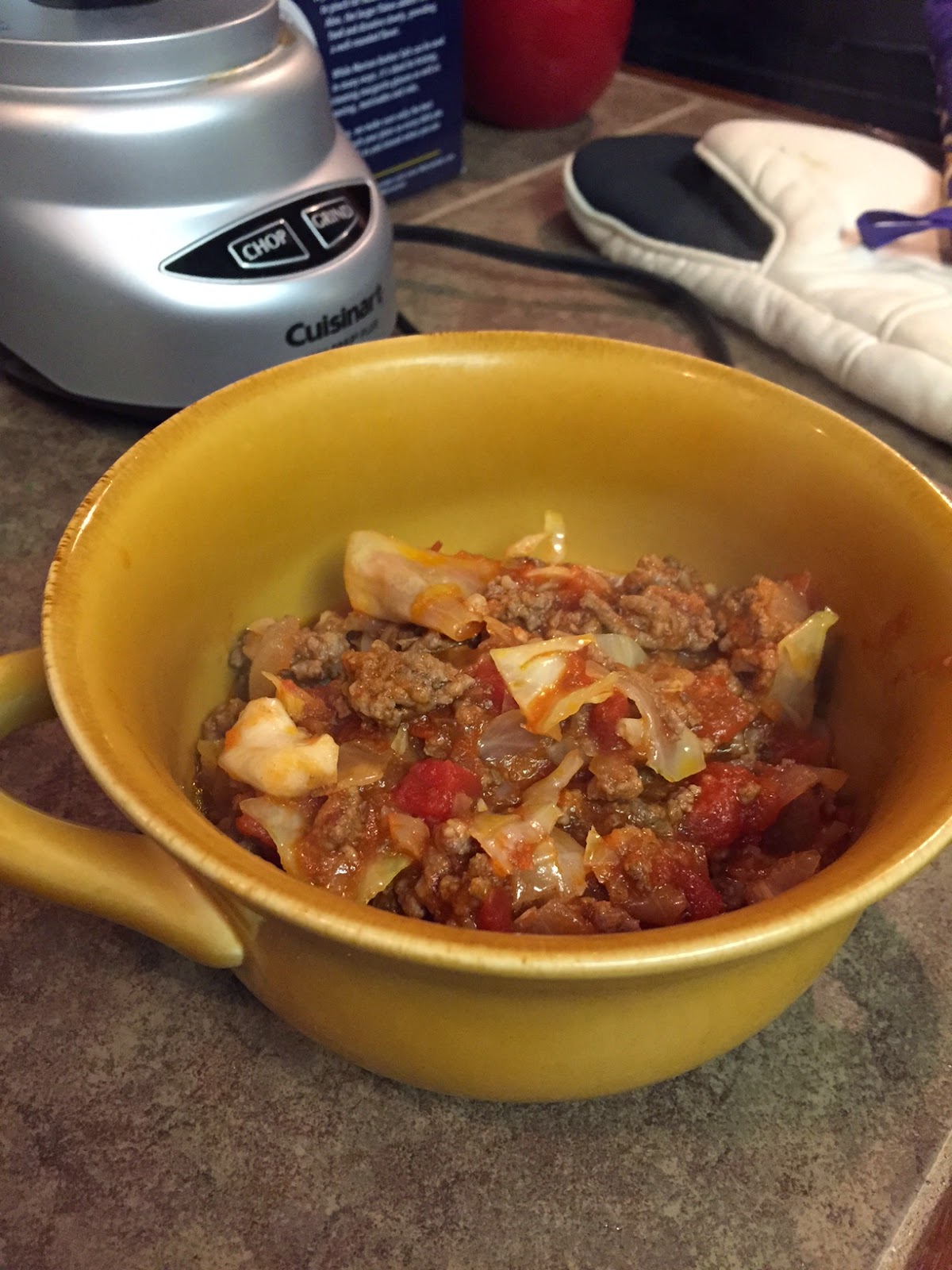 Sorry the picture isn't very pretty. But trust me, it's really good and filling! This was a favorite I tried on my last whole30. I've cooked it a few times since then. 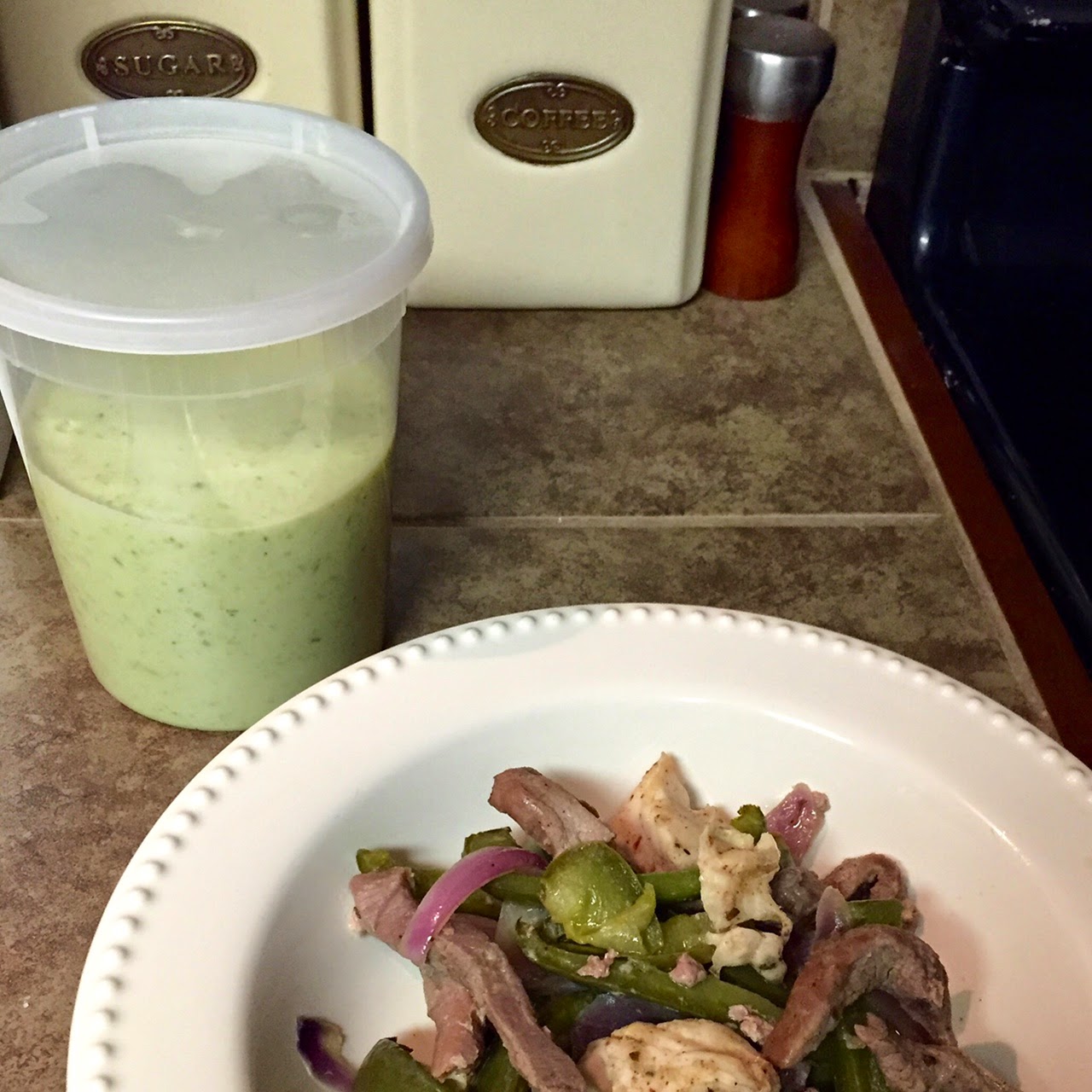 The fajitas don't have a link because I kind of just throw everything in a wok or skillet & toss it around til it's cooked. I toss in steak & or chicken strips, green bell pepper, onion, garlic & sprinkle in some salt, pepper, and sometimes garlic or onion powder. It is so easy & delicious. The dressing is AMAZING! It is a recipe i found while beginning my last whole30, but it's now my favorite - more than any I've had from a bottle.

Other dinners I tried but didn't get a picture of... all of these were also very good!
Skinny Shrimp Scampi with Zucchini Noodles
Burrito Bowl


{Parties & Such}﻿
Early in January we had my first little party and I decided I would bring dessert - something that I could eat. All i did was get fresh fruit - my favorite kinds - and toss it all in a bowl together. Now doesn't that look good?! It was!! 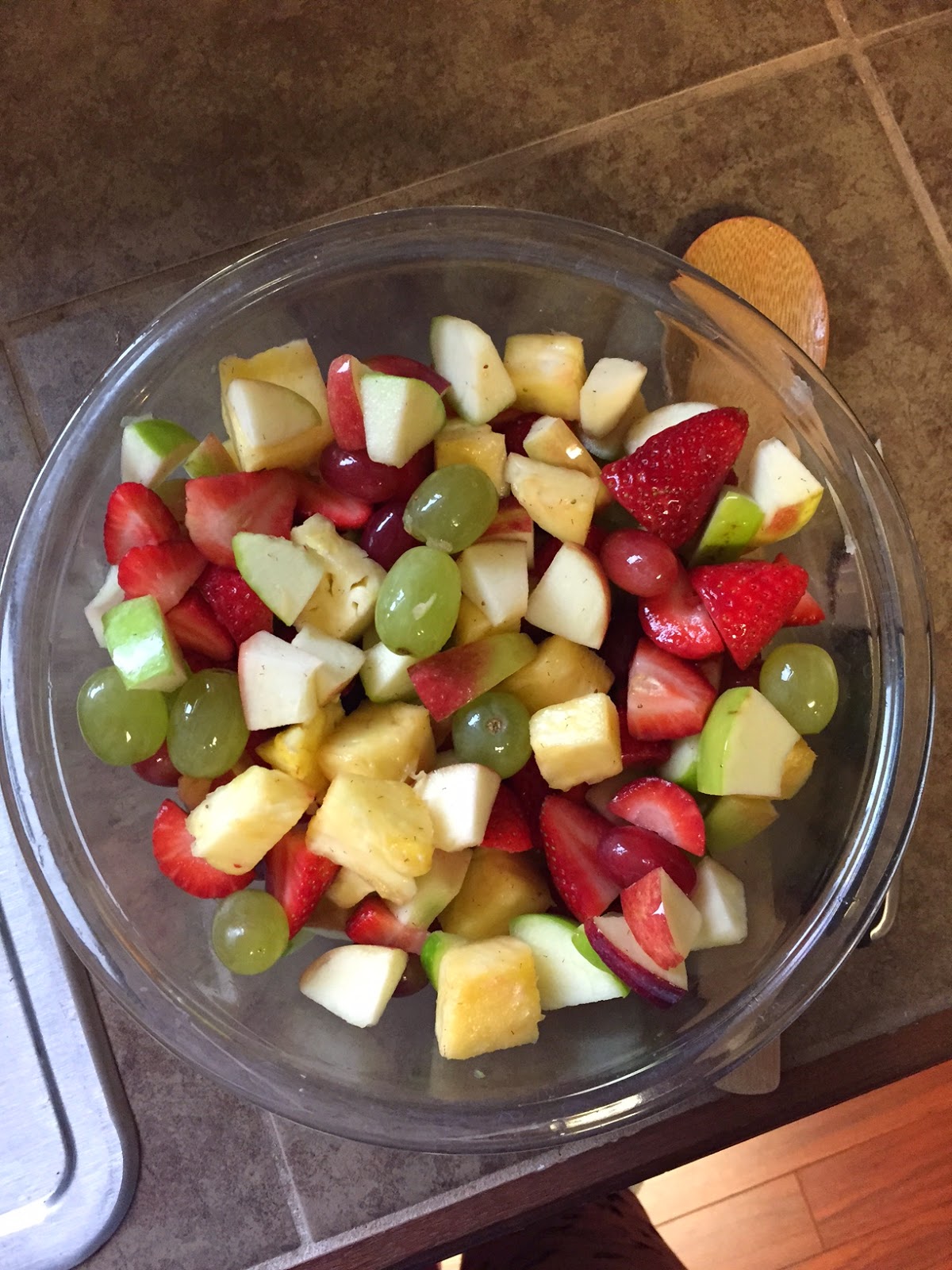 And you can drizzle coconut milk on top of that, too, if you want! Haha! By now you're probably thinking, what is this coconut milk and where do i get some?! (I know some of you aren't fans of coconut. I'm sorry. I wish I could help you! Haha. It's been my saving grace!) Coconut Milk is found in most grocery stores in the Asian foods section. DO NOT GET THE LITE WHATEVER YOU DO! You need the full fat version. It's not going to make you get fat. Promise! 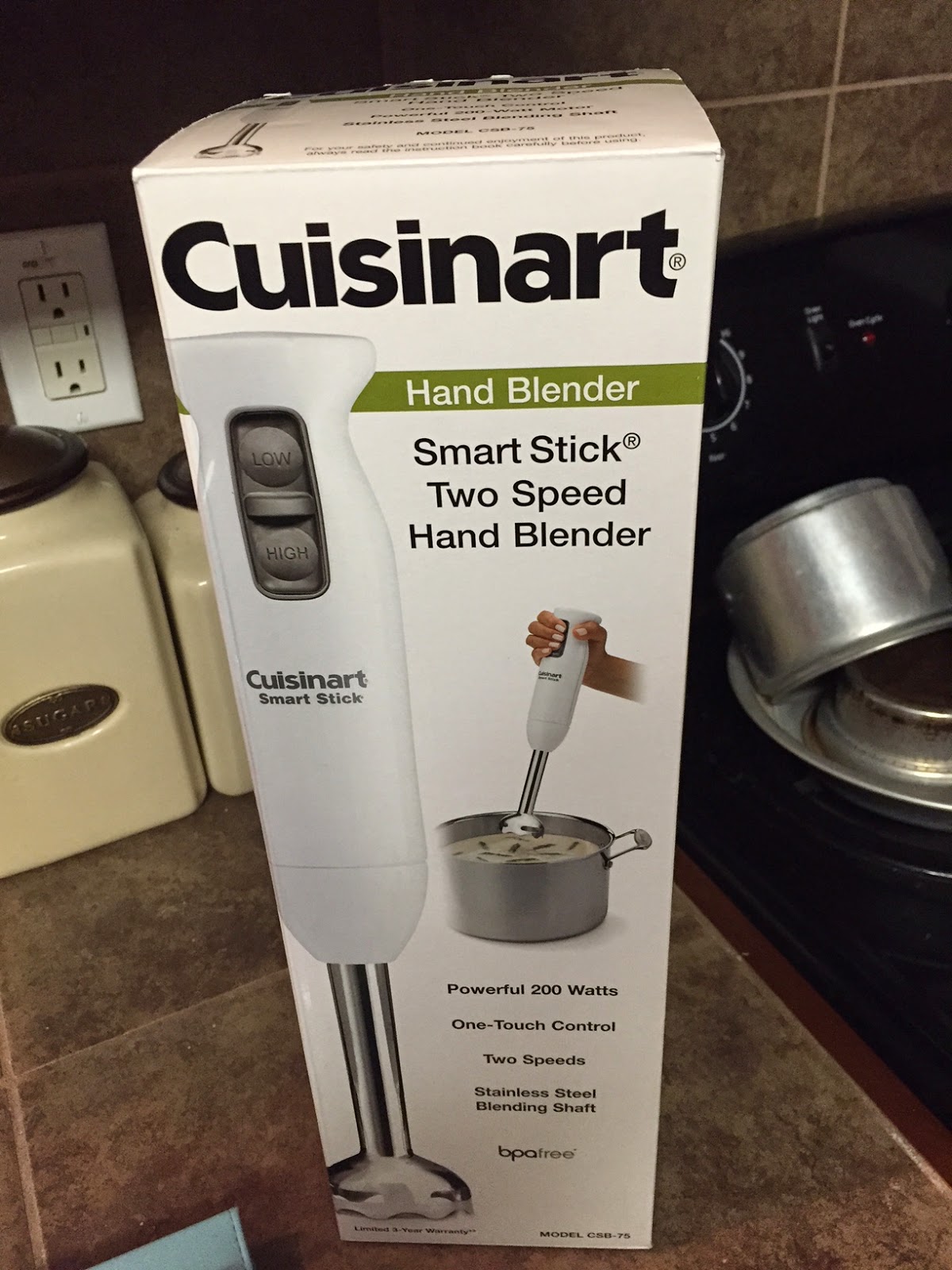 Sometimes when you open your can of coconut milk, it's solid at the top and has water at the bottom. I bought one of these hand blenders to help out with that. I love it! I've heard you can make all kinds of things with this, so stay tuned! :)

Have a great weekend!