So, if you follow me on instagram or facebook, or even on pinterest, you've probably picked up on the fact that I am doing another whole30. I'm super glad about this and proud, because I have tried to do another one approximately 590404 times since the whole30 of 2013, and I failed miserably every time. Like I've said before, this isn't the program's fault, it's my fault. I am a food addict, especially when it comes to sugar, and it has been extremely difficult for me to say no to foods that I like. Extremely difficult.

The good news is that after about 4 or 5 days on whole30, you're good to go. I mean, the cravings still come, but they aren't as difficult to resist a few days into whole30, because you have already detoxed from the sugar.

I know some of you are thinking. "Everything in moderation, Melissa!", but that doesn't work for me. I don't think it works for a lot of people. Sugar is as addictive as a drug. I know there are people out there that do have self-control, though. I'm not one of them. I wish I was! I know people who eat healthy 80% of the time, and splurge 20% of the time. To me, that is moderation, and I do hope that one day I can eat whole foods 80 or 90% of the time, but still be able to partake in a piece of cake for my birthday or some m&m's with a movie, without it sending me spiraling out of control. But that day is not today. Back in the fall, it was give me a little and I just can't stop. I was out of control. I remember having dinner with friends a few months ago. There was a basket of rolls still sitting on the table after dinner. I watched as the conversation continued and NOBODY touched the bread. They were all full, and done, and could happily enjoy the conversation. Me? Could not stop thinking about the bread. I feel ashamed to admit that, but it is truth, and I like to be real with you. In case you're like that too and think you're the only one - you're NOT.

So anyway. I've gained all kinds of weight back, and it's been a real struggle to get foods that are not good for me back out of my life! But then January came, and I decided I had to do it, I could NOT start 2015 off on the wrong foot. I also had several friends starting one, and that helped a lot. So now I'm on Day 22 and I feel pretty good. 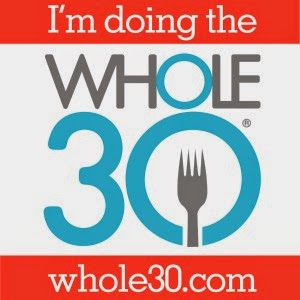 When it's over, what will I do? Well, I'm really not sure yet. I'm thinking I may allow one splurge meal. I'm dying for a regular old hamburger and fries. And no, not the healthy way - minus a bun and where you cut up the potato yourself! I'm talking about a burger from Five Guys. Ha! This won't include dessert, which is the main issue for me. I know that carbs like fries & buns turn into sugar, but they don't taste like cakes and brownies and candy, and that is what I'm going to try to stay off of, at least until my birthday weekend. And even then, I've got to be very careful.

But other than a burger and fries, I want to stick to a paleo or primal lifestyle. I want to add certain things back in, like legumes and dairy. One at a time, to see how they affect me. If i feel okay after eating them, then that's great. But i need to stay off the white sugar and flour a little while longer. Or forever. Haha.

There are a couple of things I am REFUSING to go back to NO MATTER WHAT! And yes, I mean forever, and yes, I do think it's possible. The first one is COKE. Coca-Cola. Yes, the biggest addiction. It's so gross, too, the number one ingredient is high fructose corn syrup. I mean, that just SOUNDS bad. So, no more coke for me. I know that some people say that if they are off coke for a month, and then have some, it tastes gross. That doesn't work for me. It's delicious every time. So I think i just need to stay away from it. I don't care if you need to lose weight or not, they are TERRIBLE for you. (And so are the diet ones.)

Another good reason to give it up is that when I'm not eating right (or drinking), I tend to not drink any water. But when i get off cokes & other sugary drinks, I automatically drink tons of water in place of it! Definitely not a bad thing!

The other thing that I plan to never go back to is sugar & coffeemate in my coffee. I am thrilled to have discovered that I love coconut milk in my coffee and don't really miss the sugar or coffeemate at all! This is wonderful  news! Haha! Now, I'm not as concerned about NEVER AGAIN having it like I am with the coke. There may be a time or two i have a specialty drink at Starbucks or something. But that would be the exception not the rule. I don't mind that because i love the coffee with coconut mlk so much that I don't think I will have any trouble going right back to it. It's got its own natural sweetness! (Only problem...coconut milk isn't cheap! Sad-face!)

SO anyway. There you have it. I'll keep you posted. I'm not on a diet. My coworker keeps saying things like, "For so-and-so's birthday we're going to bring donuts that morning and order a cookie cake. It's in February so you'll be off your diet by then!". Um, no. Number one, I won't be off my diet then because I'm not on a diet now. Number two, going right back to those bad foods will do exactly what it did for me after I got off of my last whole30...cause me to spiral out of control & gain a lot of weight in the process! CANNOT HAPPEN AGAIN! Now, the girl that is saying these things to me is in great shape and she does cleanses and things every so often. She also is able to use self-control (unlike myself!). But I don't think she has any idea that this isn't really a diet. This is how i want to keep eating. Whole30 isn't meant to be a diet. It's just a 30-day reset. But after that, most people transition into a more paleo or primal lifestyle. And that's what I plan on doing, too.

And by the way, Brad has been doing a semi-whole30 with me. Honestly, there is no such thing as a semi-whole30. But he's basically sticking to the w30 rules at home with me, but still bringing his soups to work for lunch, and partaking at work if there is a party or something like that. But that's fine with me!! Haha! Helps me that he sticks to it at home, so I'm not tempted. :)

My next post will share all the new recipes I have tried! I'm excited to have now tried cauli-rice, spaghetti squash & zoodles! YUM! Everything that we've tried so far has been delish! And hubby agrees! :)