Today is beautiful! I woke up this morning & sat on the couch, sipping coffee & blogging. Mom & Michelle & Brad went out on the balcony & later Mike joined them. I just sat on the couch listening to the waves. Then, Mike told me that all the seaweed stuff was gone. What? I looked at the ocean & sure enough! It was all gone!!! Yesterday, the ocean was FULL of seaweed & algae. Today it's like it just disappeared! Love that!

I said in a recent post that i prefer to lay out by the ocean & swim in the pool. That's because there's usually something in the ocean i don't like. I'm petrified of jelly fish & i don't even like the fish that mean no harm! They make me nervous. Also, the ocean has been full of algae & seaweed & i just don't like it. However, i took a look at the ocean today & knew i'd be swimming in it! It was CLEAR as could be!! Yay! 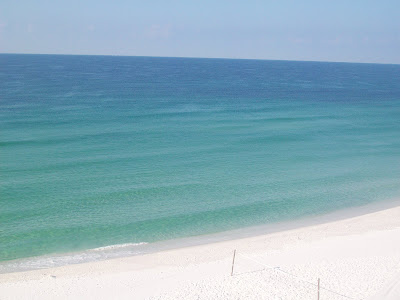 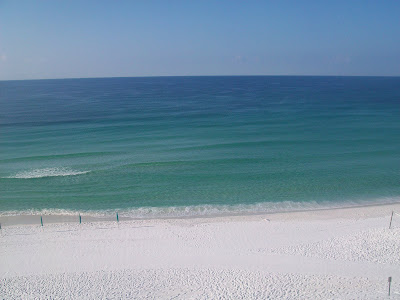 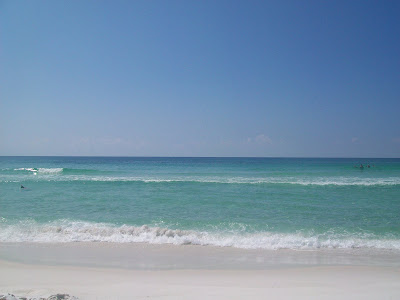 See? If you look at a this post you will see all the algae/seaweed in the water. Ew.
So, Brad & i got in our suits & headed to the beach!! We had two beach chairs & put all our stuff there. We decided right away to go ahead & get in the water & we had a blast!!! We swam for a good while, riding the waves!! I realized just how scared i am of jellyfish! I kept looking out for them, but i didn't see ANY fish. It was just beautifully clear!!! We laughed & swam & played, etc!! So much fun! We went out pretty far & enjoyed it! Then we started coming back & at some point i saw 3 fish pass by. I knew they weren't jelly fish but it still kinda made me nervous! So i was like rushing towards Brad (who had gotten away from me!). Then just when i got to him, we saw this huge round flat thing come up out of the sand at the bottom! I didn't get a good look so i didn't know what it was - just that it was dark & flat & round & creepy!! I hauled butt out of that water!! HAHA! Brad thought i was just going to put my sunglasses up & he was like "oh, wait, you're going back for good?" & i was like, "yeah! i'm SCARED!" Ha! He was laughing at me. :)

Then we got on our beach chairs & read & talked for awhile. Loved it. 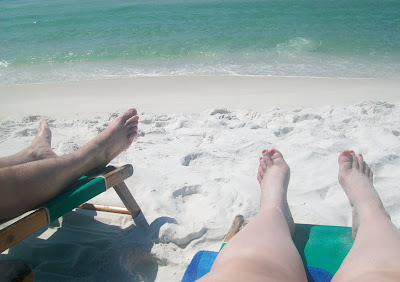 Our white legs! & Feets! :)
Then we saw that big round dark thing coming toward the shore. We were so curious to see what it was! I was scared to get TOO close so i took a couple of pictures like this... 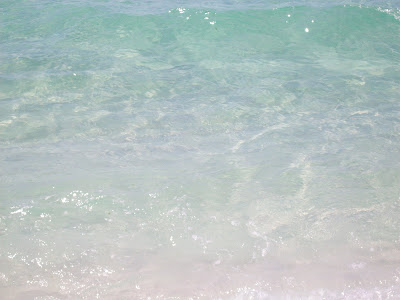 ...but i missed him!
He went away but later on came back! We could see him! We got up again & got close enough to see that it was a CRAB! A big one! HAHA! That kind of made me feel better, for some reason? I went & told a kid that was trying to catch little fish with a net. He was like, "A crab! AWESOME! Where?!" Haha.
Anyway, we had a fabulous time!! We came in & mom had made these incredible ham & cheese croissantwiches - they were waiting in the oven for us. :) Delish!
Posted by Melissa at 2:51 PM
Email ThisBlogThis!Share to TwitterShare to FacebookShare to Pinterest
Labels: BlogBook, Brad, Family, vacations